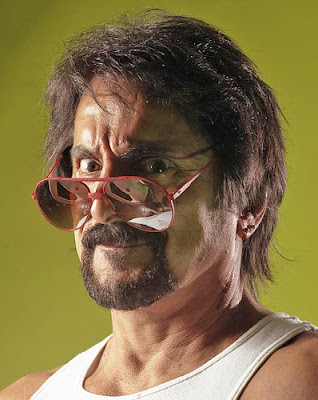 Watching the behind-the-scenes featurette included on the DVD release of the 1981 slasher fave The Burning and seeing a young Tom Savini (who barely looks different than the Savini of today, by the way - what's this guy's secret?) work his magic on the set, I was struck by a notion: when will Savini get his own bio-pic? After all, just think of the scores of unforgettable moments Savini has presided over in his roles as make-up artist, stuntman, and actor. To follow Savini as he famously made genre cinema his own in the late '70s through the mid-'80s would be a treasure trove for genre buffs - the Boogie Nights of Splatter. Imagine seeing the filming of the motorcycle gang mall raid from Dawn of the Dead newly recreated, for example. Sure, we have Roy Frumkes' Document of the Dead in this instance but while Frumkes' on-set footage stands as an invaluable record, it's not the same as being able to recreate an event. Not to fudge facts, but to be able to dramatize real life - to be at the right place at the right time for every shot and reaction you need - in the way that only scripted filmmaking allows for.
As for the narrative arc, here's my pitch: after establishing Savini's childhood exposure to the work of Lon Chaney Sr., which set him on the path of being a make-up artist, we jump ahead to him losing the gig to provide the effects for the original Night of the Living Dead due to being drafted into the Vietnam War. He then goes on to experience the horrors of Vietnam through his assignment as a combat photographer (Savini has often said that the graphic sights he witnessed in the war greatly influenced his later work as an effects artist) and upon returning to civilvan life, he begans to 'bring the war home' by rendering unflinching imagery on screen with a realism that audiences had never seen before (and 1974's Deathdream stands as the first film - long before Hollywood addressed the issue in dramas such as 1978's The Deer Hunter and Coming Home - to comment on the effects of Vietnam).

After charting Savini's rise to celebrity status (his amusing guest apperances on Late Night with David Letterman could be recreated), and detailing his personal and professional dramas throughout the '80s (whatever those might be) the film would end on a high note with Savini's career coming around full circle back to Night of the Living Dead as we end on Savini's first day of shooting as the director of the 1990 remake of NOTLD. Or the film could continue further, documenting Savini's later-day cult fame found through his roles in the films of fans-turned-filmmakers like Quentin Tarantino and Robert Rodriguez as well as the inception of Savini's Make-Up Effects program, confirming his enduring impact on future generations of filmmakers.

Sound like a movie to you? Yeah, I think so too. Sure, I'm just daydreaming here but honestly - I think a Savini movie needs to happen one day. Lon Chaney Sr. had his own movie (1957's Man Of A Thousand Faces, with James Cagney) and Savini deserves at least as much.
Posted by Jeff Allard at 4:27 AM

I agree completely. Every horror fan would love it, and with the right talent involved, it could be a powerful mainstream movie.

It is weird that Savini hasn't aged. Maybe he took after the movies he lives with and became a vampire.

If the lives of Ed Wood, Harvey Pekar and Andy Kaufman could make for great films, I don't see why Savini's couldn't as well.

And yeah, it's wild how very little Savini has changed in the last thirty years or so.