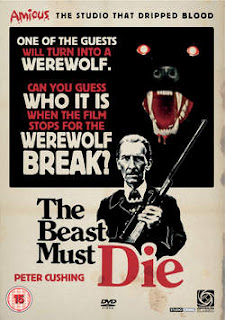 As the horror classics of yesteryear are reintroduced to new generations of fans courtesy of slick, well-monied (if not always well-considered) remakes, I'm still waiting impatiently for someone to pony up the cash for one of the few films that really needs attention, 1974's The Beast Must Die.
Many low budget horror films thrive on their hardscrabble origins - films like Night of the Living Dead or The Texas Chainsaw Massacre would not have been the classics they are without their handmade vibe. And the films of Val Lewton, such as Cat People, expertly used suggestion to compensate for a lack of spectacle. But The Beast Must Die really could've stood to afford fancier sleight-of-hand in depicting its titular beast. Even as a kid, I knew that any movie trying to sell a dog as a werewolf was going to be caught flat-footed. I don't care how darkly a scene is lit, a dog is still a dog. Werewolves don't wag their tails.
Some horror movies can pull off a monster that's charmingly substandard. Unfortunately, this is just substandard. Then again, even Steven Spielberg couldn't make a convincing shark in Jaws a year later in '75 so maybe it's unfair to give The Beast Must Die too much grief over its werewolf. Especially as it's such a cool movie in every other respect.
Based on the short story "There Shall Be No Darkness" by James Blish, The Beast Must Die has wealthy big game hunter Tom Newcliffe (played by Calvin Lockhart, who's own name seems to much better fit his character's cool factor) corralling a group of hapless guests (including Peter Cushing and Charles Gray) at his inescapable island manor in order to ferret out which one is a werewolf (!) and hunt down what he sees as the ultimate quarry. Unfortunately for all the guests who aren't werewolves, the chance of getting mauled to death before Newcliffe collars the beast hiding among them is extremely high. Because even with all the high tech resources at his disposal, Newcliffe isn't able to get the upper hand.
As a lycanthropic version of The Most Dangerous Game crossed with a Ten Little Indians-style murder mystery, The Beast Must Die is inspired. But as much as I love the movie as is, and appreciate its oddball inclusion in the '70s blaxploiation genre - thanks to Lockhart's brash, bad-ass hero and the horn-heavy funk of Douglas Gamley's score - The Beast Must Die has too much unused potential not to be retold one day with better resources.
Any effort to update The Beast Must Die, though, would mean its infamously silly gimmick of the "Werewolf Break" - where the film stops for thirty seconds just before the climatic reveal so viewers can ponder the surviving suspects and take a last chance to guess the identity of the werewolf - would probably have to be left behind. But before fans cry heresy, let's be honest. Don't you think this werewolf film deserves a real break? Or should it always be a shaggy dog story, just a wolf in cheap clothing?
Go on, think it over...you've got thirty seconds to give your answer.
Posted by Jeff Allard at 6:04 PM

Email ThisBlogThis!Share to TwitterShare to FacebookShare to Pinterest
Labels: The Beast Must Die