All The Right Notes 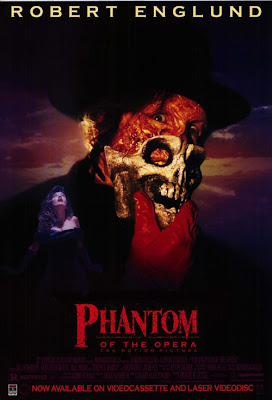 When it comes to horror films, critics and audiences have come to prefer their B-movies to really be A-budget studio movies, showing little patience for appreciating the virtues of the former. If it's not the cream of the crop, it's just garbage.
Now I understand that movies are an expensive habit to keep up with and at today's prices it's hard to justify spending hard-earned cash on second rate entertainment but personally I've always liked second rate entertainment. I've known a lot of people over the years who were second rate human beings and they were just fine to talk to - so why should I be such a snob when it comes to movies?
All of which brings me to director Dwight H. Little's much-slighted 1989 version Phantom of the Opera. While Tim Burton is currently being hailed for the efforts of he and scripter John Logan to create a film that evokes Hammer-era Gothic horror with Sweeny Todd, Little attempted to do the same almost twenty years ago with his Phantom. Even if the results weren't entirely stellar, well, that isn't a reason not to give the guy some credit. As I like to say, second rate doesn't mean worthless. Period horror wasn't really what the kids were into back in the late '80s but Little made a valiant effort to make Gaston Leroux's tale appeal to the Jason and Freddy generation.
To that end, Little cast Freddy himself, Robert Englund, in the titular role. The biggest horror star of the '80s by a wide margin (can it even be said that he had competition?), Englund seized the opportunity to play a "classic" monster by giving a performance that left nothing on the table. The hammy gusto that Englund displays in this film is an awesome spectacle, making his work with Freddy look like a study in minimalism. But to anyone who might criticize Englund's approach as being over-the-top, I can only ask: why would an actor play a role like this if they're not going to play it larger than life?
And this being an '80s horror movie, Englund's Phantom is given a ruined face - courtesy of his character's Faustian pact (and Kevin Yagher's notable FX work) - that only FANGORIA could love (as the text on the back of the VHS release proudly announced - "He's Back And He's Uglier Than Ever!"). Little and scripter Duke Sandefur also work in a Freddy-style witticism or two - which Englund dutifully does his best to sell.
As the Phantom's love interest, actress Jill Schoelen was in the middle of her too-brief run as a Scream Queen - having already starred in 1987's The Stepfather and 1989's Cutting Class (and with 1991's Popcorn and 1993's made-for-cable sequel When A Stranger Calls Back yet to come). In Phantom, she plays Juliard student Christine Day, who arrives at a Broadway audition armed with a long-lost piece of music to sing (discovered by her bookish best friend Meg, played by a pre-SNL Molly Shannon) only to be knocked unconscious mid-song by a falling sandbag (which is not as unintentionally funny as it sounds - sorry).
What follows is a lengthy flashback to Christine's past life in nineteenth century London where she was the understudy to the lead in a production of Faust. Here she was also being secretly coached by the Phantom, a figure who never stepped out of the shadows but who was driven to make Christine a star. This process involves not just singing lessons but many slasher movie-style deaths - including one skinned victim that bears the influence of Clive Barker's then-recent Hellraiser and its first sequel, Hellbound. The MPAA may have been cracking down on graphic violence in the late '80s but Little and co. managed to make this a satisfyingly grisly picture.
Dispensing with much - if not quite all - of the romanticism that has been applied to the character in other versions, including most famously in Andrew Lloyd Webber's musical, Little and Englund's Phantom is a much more vicious beast, making this the most lurid version of the story to date. But there's some poetic moments to appreciate, too - such as when the Phantom uses a violin to serenade Christine in a cemetery during a light snow fall. There's also a nod to Lon Chaney Sr.'s classic 1925 Phantom of the Opera as Englund appears at a masquerade ball in the guise of Poe's Red Death - just as Chaney Sr. did. And Little stages an exciting climatic pursuit of the Phantom through his sewer lair.
Does it all add up to a great film? No, but it's a handsomely produced effort (with Budapest serving as an effective double for 18th century London) that has its heart in the right place, even if it doesn't hit all the right notes.
Posted by Jeff Allard at 7:37 AM

Email ThisBlogThis!Share to TwitterShare to FacebookShare to Pinterest
Labels: Phantom of the Opera, Robert Englund