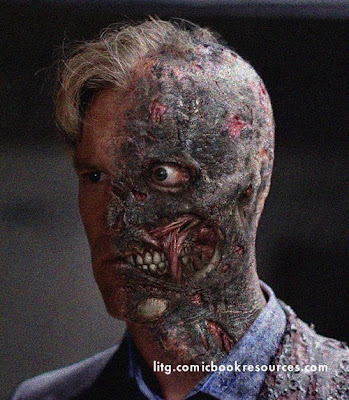 Proving that it doesn't pay to be a crusading D.A. in Gotham City, here's an early look at how Harvey Dent fares against the underworld in this summer's Batman sequel The Dark Knight. As you can see from the above picture (concept art, not finished character make-up), it's not a sight for the squeamish.
For me, this look is just a little too real for Two-Face. As a fan of the character, I always liked the fact that Two-Face's disfigurement was more iconic than just an injury. Becoming Two-Face did more to Dent than just make him hard to look at. After all, he was splashed by acid and yet the scarring magically split his face into two perfectly divided halves - as though the accident was simply the trigger event to manifest something that was already inside of Dent. And Dent's scars were always depicted with a quality of baroque grotesqueness that would've been right at home in Chester Gould's Dick Tracy.
He may never have been anyone's idea of handsome but in the comics, there was something strong about Two-Face that shone through his appearance and made him exempt from pity. Here, though, the character just looks tragic. I know some fans like to applaud the 'real-world' approach that director Christopher Nolan is bringing to his Batman films but making a burn victim into a super villain strikes me as being not-so-fun.
All I know is this - if the action figure for Two-Face is true to this look, it might be the first of its kind to come with its own barf bag.
Posted by Jeff Allard at 8:29 PM

Email ThisBlogThis!Share to TwitterShare to FacebookShare to Pinterest
Labels: The Dark Knight, Two-Face