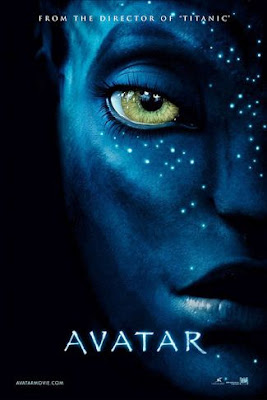 It's often been reported that writer/director James Cameron has a something of a big ego. I can't personally verify whether this is true or not but after seeing his latest opus, the long-in-development Avatar, I'm gonna go ahead and say that any ego he has is well-deserved. While there's never any excuse to be a jerk, in regards to Cameron thinking he's the shit when it comes to making movies, he's clear to have an enormous head. To watch Avatar is to watch Cameron mopping the fucking floor with everyone else out there.

Some reviewers have been churlish towards Avatar's storyline, saying that it lacks originality, but while its story of an Earthman who becomes assimilated into an alien culture and rises to be a leader of his adoptive people has plenty of precedents in pulp literature and film, it's how Cameron pulls these elements together that matters. He's out to make a film that is timeless, mythic, and universal in its appeal so it should be no surprise that a story with such broad intentions would have roots in other tales that have been told many times over. Originality is not the most important element of a work of fiction. What makes a story interesting is not whether it's ever been told before but how well it's told and as a storyteller, Cameron is no slouch.

As for Avatar's much-touted technological advances, I can't say how far this film moves the industry ahead or whether this is a 'game-changer' for filmmakers but I can say I've never seen anything quite so jaw-dropping as what Cameron and his FX team deliver here. It's not about money shots or specific moments, it's about everything - the whole package. This is one of the most immersive, intricate environments ever created for film. The painstaking attention to detail and the verisimilitude of everything we see here - machinery, plants, wildlife, aliens - is astonishing. This is a film that single-handedly decimates nostalgia for the methods of the past and leaves you hungry to see what else can be realized with these tools.
There's a moment in Avatar relatively early on where the character that Sam Worthington plays, Jake Sully, is lost in the forest of Pandora at night in his avatar body and he's prowling among the trees and vines while holding a torch while alien animals are encroaching all around him and I couldn't help but marvel at this moment, how every single detail of this complicated scene (on top of the fact that it's at night and that it has to be 'lit' by animated flames) is so beautifully rendered. There's many, many moments like this in Avatar where I sat amazed at the fact that everything on the screen was born entirely in a computer. I thought I was accustomed to CG animation by now but this is far beyond anything I've seen. The character work on the Na'vi alone is breathtaking. The love interest for Jake, Neytrini (Zoe Saldana), is such a convincing presence that I can imagine a day when the film industry starts to give CG acting awards. Neytrini goes through every possible emotion in this film from joy to anger to sorrow and never once do her facial expressions look like something that came out of a computer. There's real acting at play here that goes beyond Saldana's vocal work. The illusion of life that is put into Neytrini's face (and those of the other Na'vi) by Cameron's animators is miraculous.
If it sounds like I'm writing a love letter to this movie, well, I am. What baffles me is how anyone else who loves movies wouldn't do the same. I can understand someone not being interested in Avatar to begin with or to be skeptical of Cameron's ability to pull off his ambitions but it dismays me to see the dismissive attitude of some reviewers towards Avatar where they're engaged in petty carping about the storyline or the dialogue (neither of which are sub-par) and giving just a back-handed acknowledgement of its technical accomplishments. When these are the same web critics who can't say enough about a film like Punisher: War Zone (which hey, I enjoyed myself), it's galling to see them piss on a movie that's genuinely trying (with success) to expand what's possible on film. Dismissing Avatar because the story isn't appropriately complicated or adult by some imagined yardstick is like dismissing, say, The 7th Voyage of Sinbad (1958) because the characters are perhaps a little flatly written.
Some might say that effects are just window dressing or eye-candy but I disagree - they're a part of what makes movies a transportive experience. I'm sure that Up In The Air is a fine film that speaks to our current times, but does it have any battles between man-made war machines and primitive alien races who fly through the sky on the backs of dragons? I'm guessing no. Movies can speak to our times and to our everyday concerns but they can also take us out of our lives, out of our bodies, and let us experience realms purely of the imagination. And as a means to enable that, Avatar is as deeply felt and important as any work of art.
Posted by Jeff Allard at 10:54 AM

I am so happy to hear that this overbudgeted film is turning out to be worth every penny. Every trailer and ad I have seen looks absolutely stunning, and after this brilliant review I may even be swayed into watching it in the theaters. I know I will end up regretting it if I dont.. Glad you liked it!

I have had very little to no interest at all in Avatar, but the interest is starting to build slightly with reviews like yours, Jeff.

I'm not the biggest fan of Cameron, motley because I feel his film are not the best when it comes to age and the longer time goes on, the flaws begin to show more and more. Even Aliens, which is a film I adore, has some of these issues, but not to the extent of something like T2, which has aged incredibly poorly and has become a film that I almost despise nowadays.

Still, my interest is more than piqued and maybe I will give Avatar a look in the future.

Carl, I don't know if it'll turn out to be worth every penny to the studio but I can attest that every penny showed up on the screen! Definitely check it out - you'll be sorry if you wait for DVD. I don't know if you'll like it as much as I did but I hope you will.

Matt, it's funny - I really wasn't that psyched for Avatar. I wanted to see it, sure, but I hadn't been anxiously awaiting it. As for how it will age, who knows? All I can say is that it worked for me. It's inspring to see someone swing for the fences and not be content to just make an ordinary movie. No film is easy to make but the undertaking that Cameron set for himself and his crew here was especially enormous. And I think that they pulled it off brilliantly.

I had a blast watching this movie. It's not perfect, and perhaps some criticism is warranted, but to completely dismiss it for a few flaws as some critics have done is just ridiculous. And having seen both this and 'Up in the Air', I can say that 'Avatar' actually delivers more of substance than the Clooney film, as enjoyable as it is, does.

As far as the Avatar criticism goes, I think there's a real pettiness in some of the negative Avatar reviews. It's like the more someone tries to accomplish, the more people who attempt nothing try to tear them down.

Amazing review Jeff. I was casually interested but now I'm moved to head to the theaters this week while I am off from work.

Thanks, PoT - definitely give Avatar a shot. Even if you don't walk out raving about it, I think you'll at least enjoy it!

My first thought after experiencing this movie was "I can't believe I almost missed this due to the shoulder shrugging reviews!"

You can almost set your watch to when public opinion sours against a director and wow, what a bunch of ingrates we've become in this culture!

I think the whole "style over substance" "where is the soul of this movie?" complaints were arrived at before any one stepped foot in the theater.

This movie has soul to spare and furthermore it speaks to the wonder of the filmgoing experience itself.

It made me think that when we see movies we are just like that main character, projecting ourselves into other bodies and venturing into worlds unknown.

Avatar is a marking point that shows that the frontiers ahead of us as an audience are vast and more infinite then we had ever imagined before.

It deserves far more than a "Meh, what's coming out next Friday?" response.

Unk, the negativity that's out there among some fans just blows my mind. I can see being doubtful up front but when you see the movie - come on, just give it up and admit that Cameron just schooled everybody out there! This movie is history and I'm just glad to have seen it firsthand.