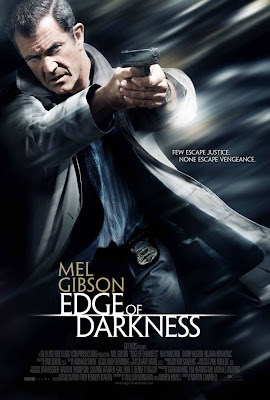 Mel Gibson's return to the screen in Edge of Darkness doesn't reinvent the conventions of the thriller genre but it does bring a bracing authority to its familiar beats. This is territory that Gibson knows well, as does director Martin Campbell (Casino Royale) and their collaboration has resulted in a supremely sure-footed effort.

With a script by William Monahan and Andrew Bovell based on an 1985 BBC miniseries, Edge of Darkness follows Gibson's character, a Boston homicide detective, as he investigates the death of his beloved daughter who returned home for a visit only to be gunned down next to him on the porch of his home. As expected in a thriller, the reasons behind his daughter's death are not simple and in fact tie in to a much larger conspiracy.

In playing a grieving parent who turns their rage towards seeking justice and, ultimately, revenge, Gibson is in top form. This is a role that's tailor-made for him and in his first starring role since 2002 (When We Were Soldiers, Signs), Gibson doesn't leave anything on the table. Recently, many of the glowing reviews for Up in the Air cited George Clooney's indelible movie star charisma as being vital to that movie's success and the same can be said of Gibson on Edge of Darkness. Gibson sells the character of Thomas Craven, and this movie, in a way that few other actors could.

At heart, the conflicts that Craven goes through here are nothing new. He's up against forces bigger than he imagined but he's got righteous rage on his side. But Gibson doesn't play Craven as a stock character. The loss that he suffers as a father is palatable (throughout the movie, Craven speaks to the spirit of his daughter, a device that I wasn't sure was necessary but it has a touching pay-off at the end) and in his quest to uncover the truth, he is capable to the point of being efficiently lethal but he isn't a superman. The time away from acting hasn't dimmed Gibson's chops in the least and this is a performance that easily ranks with the best of his career.

As the first movie to get Gibson in front of the camera in eight years, one might wonder what was so special about this script. On the surface, the fact that it appears to be a familiar, audience-pleasing revenge story might lead some to assume that Edge of Darkness simply represented safe ground for Gibson but I think it's more a case of this being the kind of tough movie that has gone out of fashion and that Gibson responded to that. Edge of Darkness delivers on the gratifying, only-in-the-movies fantasies of scoring payback and putting down the people who need to be put down but it's also about hard-nosed characters facing mortality and the crooked, compromised ways of the world with sober understanding.

There's also a political anger at work here (as Craven's search for answers moves him farther up the ladder of Massachusetts' legislature) that is more pointed than I've seen in any mainstream film of late.

Besides Gibson, the other indispensable player here is Ray Winstone as "Captain" Matt Jedburgh, an CIA officer called in to handle the potentially messy fallout of Craven's daughter's death. This role was originally cast with Robert DeNiro but thankfully he dropped out as it's impossible to imagine that DeNiro could've matched Winstone's performance. His scenes with Gibson as these kindred men of honor spar with each other are among the film's high points.

The action and thriller genre has become increasingly glib, marked by outrageous, over-the-top violence but the slow-burning style of Edge of Darkness is a reminder of a time when these kinds of films weren't glorified cartoons. The closest thing to it in recent years would be Taken (2008), which seemed like a throwback to an old-school Charles Bronson type of movie but Gibson wouldn't go for anything so lightweight. Gibson has a thing for suffering and Edge of Darkness is right in line with that. Compared to almost anything else out there, it's, well, dark. But I think Gibson would say that's just life we're looking at.
Posted by Jeff Allard at 6:40 AM

How in the heezy did you see this already? Can't wait to see it.

I agree with a lot of what you say about the movie. Gibson especially does a great job, and the parts of the film where he's on screen work pretty well. My problem with the film is that is has too many characters and subplots for a 2 hour film, which probably wasn't an issue with the TV series where they could take time to focus on the other characters more. I'll be curious to see if there's a director's cut DVD/Blu Ray down the road with another 20 to 30 minutes of material.

I really wanna see this, if not for the locations in which it was shot, but because I love Gibson as an actor (and a director) and am happy to see him back out with something that looks to be pretty solid. Thanks for reviewing this one, I will have to check it out!

Bob, I'm sure the miniseries covered similar material with more depth but I thought that overall the writers did an admirable job of compressing a complex storyline.

And Matt, if you don't make the trip to the theater to see this one, give it shot on DVD. Who knows - in the end, that may prove to hold a better cut of the movie.