We All Go A Little Crazies Sometimes 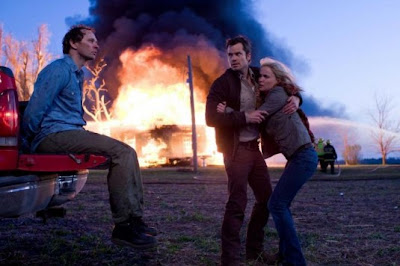 "There are moments when we cannot believe that what is happening is really true. Pinch yourself and you may find out that it is."

The above quote is from Tobe Hooper's The Texas Chain Saw Massacre (1974) but it readily applies to the madness experienced by the residents of Ogden Marsh in the superlative remake of George Romero's The Crazies (1973). As in Romero's film, a government-invented toxin is accidentally released into a small town's water supply, causing exposed members of the population to burst into uncontrollable violence. Unlike the original, however, this update wisely doesn't opt to split its narrative between the plight of the afflicted townspeople and the military's efforts to contain the outbreak. Instead, the screenplay by Scott Kosar and Ray Wright stays with the townspeople from beginning to end, letting us only encounter the military as a hostile, invading force.

While Romero's film spoke to the paranoia and distrust of government that was running high in the US in the tail end of Vietnam, the new Crazies is equally timely in speaking, without any polemics, to the paranoia and distrust of the government of our current Tea Party era (as well as stoking our ever-escalating fears of infection). Throughout the turbulent late '60s and early '70s, the horror genre was rife with cautionary tales expressing distrust towards the institutes sworn to protect us and this new Crazies is a bracing call back to those days. We've seen this type of movie before, yes - but we haven't seen it in awhile, and seldom this well put together.

Timothy Olyphant (HBO's Deadwood) is in fine form as David Dutton, the sheriff of Ogden Marsh. Genre regular Radha Mitchell (Pitch Black, Silent Hill, Rogue) plays his wife Judy, the town's doctor. David and Judy are expecting their first child and life seems idyllic for them and the rest of their quiet community until one afternoon when a man (Mike Hickman) carrying a shotgun wanders onto the baseball field during a high school game and forces David to draw down on him. In the wake of this senseless act, further incidents tell David that something has gone terribly wrong in Ogden Marsh. This is confirmed when all contact to the outside world by way of phones and computers is terminated and military forces start to round up townspeople.

Although its narrative doesn't feel hurried, The Crazies moves at a breakneck pace with the crisis mushrooming from one scene to the next. David and Judy find themselves in enough perilous situations, replete with last minute rescues and resourceful escapes, to make this a potent combination of Grand Guignol and cliffhanger serial. Technical credits are outstanding with special note going to the work of cinematographer Mazime Alexandre for giving The Crazies such a strikingly pretty, yet appealingly grainy, look.

Without ever feeling deliberately retro, Alexandre (who did the cinematography honors for all of director Alexandre Aja's films save for Piranha 3-D) provides The Crazies with the kind of lived-in feel and natural warmth that used to be a familiar sight to genre fans. Had it adopted the same slick look of most modern genre fare, The Crazies would've surely forfeited much of its effectiveness.

I liked director Breck Eisner's episode of the anthology series Fear Itself ("Sacrifice") well enough but The Crazies decisively establishes him as someone with a real talent for horror. This is a remake that's wholly respectful of its source material and yet handily tops it.

Ironically, The Crazies is the best new millennium remake since another Romero redux, Zack Synder's 2004 Dawn of the Dead (in what must be a purposeful nod to Synder's film, The Crazies also uses a Johnny Cash song during its opening). By showing how expendable an American community can be, The Crazies suggests with timely cynicism that the only health the government is ever out to protect is their own.
Posted by Jeff Allard at 11:19 PM

Great review! I have to say I was on the fence with this film as I really dig Romero's version but your review has motivated me to check this one out. I guess, the main problem I had with this new version is that in the ads the "crazy" people are more easily identified than in Romero's and I was worried that this was indicative of the rest of the film - that everything is spelled out. I do like Timothy Olyphant and Radha Mitchell so there's that.

Olyphant and Mitchell are terrific in this - especially Olyphant, who seems cut from an earlier cloth of Western movie hero here. The crazies, in general, are more easily identified and this is more geared towards action than Romero's film but it's all carried off with a lot of gusto.

Jeff,
Thanks! You've helped me make up my mind: I'll check this one out.

So glad you liked this Jeff and I wholeheartedly agree. I caught a screening on Wed and posted a relatively spoiler-less review yesterday. I think this tops the original and does way more in character development and getting the viewer swept up into the madness and anxieties of what is actually occurring onscreen (which the original failed to do for me).

Timothy Olyphant used to do the sports on LA's sadly defunct Indie 101.3. He's very funny, a characteristic he brings to most of his movie performances. I doubt I'll like The Crazies as much as Jeff does but I'll check it out at some point.

PoT, it's been way too long since I saw Romero's version to do a substantial comparison but the remake is much more streamlined than I remember the original being and I think that was the right way to go here.

Arbo, you probably won't enjoy The Crazies as much as I did but I bet you'll really like Olyphant's peformance.

My main hold on seeing this was that it seemed to be going for an action movie with 'zombies'... rather than the more subdued strangeness of the original.
The thing with making the crazies LOOK crazy bugs me. In the original a lot of the creeping fear was in seeing your friends, still looking completely normal, start to do odd things (and not just violent things). It's easier to shoot your buddy when he's visually changed as well as mentally.
Also, not showing the military side of the situation seems like it drops the plot into more simplistic territory. Is it commenting on the current distrust/fear of the government or just playing to it?
I'm sure I'll end up seeing this anyway... but your review removes a bit of my reluctance... kinda.

Well Knob, if it helps any - your fears about the movie are well-founded! This doesn't go for the same subtlety of the original at all. There's some low-key moments but as far as depicting the crazies, the full-on zombie make-up is not in line with Romero's film.

And it doesn't give equal weight in any way to the military's point of view, either. That is a strength of the original that I remember - that there was some balance given to observing the bureaucratic fuck-ups that get in the way of problem-solving. Here the military IS an evil boogeyman.

But while that may be playing into hysteria and paranoia, I thought it was a good way for this film to go for the simple fact that it's more frightening. It goes right to our worst fears about what the government is capable of and then amplifies them to the nth degree. Horror films used to be cynical in this way as a matter of course - look at the end of Return of the Living Dead - but it's been awhile since we've seen it.

I liked the new Crazies a lot, Knob, but I don't want to steer you wrong. All the issues you're worried about are definitely a part of the movie so approach with caution!

Ok, forewarned is forearmed, thanks.
I'm figure I'll enjoy it... maybe I'll just pretend it's a spinoff of 28 Days Later.

You definitely liked this a little more than I did, but I overall I was happy with the movie. The first 2 thirds especially worked for me. What dropped this from a 3 out of 4 to just 2 1/2 in my book was the extended truck stop sequence. After the measured pace and slow build, it just felt like too much unnecessary action got crammed in to the conclusion.

I get what Arbo is saying. The more subtle craziness of the original is one of its strong points. Both movies have their shortcomings, but when everything gets tallied up I think this is one remake that is better than the original.

Bob, I agree with you about the truck stop scene - it did feel like an extra action beat the movie didn't need. However, the movie had earned enough good will from me by then to just roll with it.