Terror In The Oscar Aisles 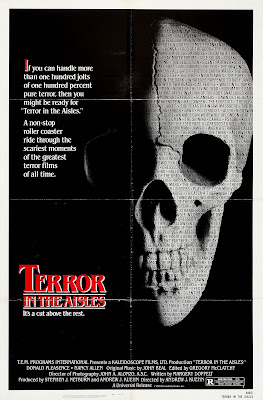 When Terror in the Aisles, a feature-length compilation of horror highlights, was released in 1984, it was greeted by genre fans as a film that didn't have much insight or knowledge about its subject. While the idea of a film celebrating the best of a chronically underappreciated genre was a welcome one, the execution was lacking. It was hard to find much good to say about a tribute to horror films that spent so much time on peripheral genre titles like Marathon Man (1976) or films that, even by the most generous definition, were not horror at all (such as the 1981 Sylvester Stallone cop movie Nighthawks).

The Oscars delivered their own version of Terror in the Aisles during last night's awards ceremony with a 'tribute' that seemed to be assembled by people with only a dim affection for, and only a passing familiarity with, the horror genre. I'm not a hater of the Twilight series (I have no strong feelings about it - more power to those that love it but it's just not for me) but I also feel that assigning two of the stars of that series (Taylor Lautner and Kristen Stewart) to handle the tribute's introduction got things off on a bad foot - especially when Academy honoree Roger Corman would've been a more apt choice. It was also galling that Lautner and Stewart wrongly cited The Exorcist (1973) as the last horror film to receive attention on the Oscar stage. It's not Lautner and Stewart's fault that whoever wrote their intro forgot about 1991's The Silence of the Lambs (directed by Corman grad Jonathan Demme) but the oversight was an immediate signal that horror was already getting slighted in the midst of its own tribute.

As for the clips themselves, it was a perplexing grab-bag that bumped classics like Jaws, The Exorcist, and Psycho up against Texas Chainsaw Massacre: The Next Generation (at least the original TCM was accounted for as well), Twilight: New Moon (if a recent vampire film had to be included, shouldn't it have been Let The Right One In?), and Marathon Man (Terror in the Aisles flashback!). While I'm all for stretching the definition of what a horror film is and I'm all for spreading the love to marginal genre titles (and I'm also all for time-wasting trash like Leprechaun), with only about five minutes to honor the history of horror, should any non-horror films, or any titles that weren't A-class examples of the genre have been included at all? Also, with clips from Beetlejuice, Edward Scissorhands (?!?), and Sleepy Hollow, director Tim Burton earned the distinction of being the individual filmmaker with the most films represented in this 'tribute' to horror (only one film apiece made it onto the reel for Romero and Carpenter, two for Craven, and none at all for Argento, Fulci, Bava, or Cronenberg) and that's just wrong. Best Director winner Kathyrn Bigelow's vampire classic Near Dark (1987) should've merited an inclusion as well.
Maybe some love is better than none but this tribute to horror was the definition of a missed opportunity. A once-in-a-lifetime chance to give the zombie vs. shark fight from Zombie (1979) a venerated place in Academy Awards history was missed last night and to me, you can't call a shout-out to horror that doesn't include any Fulci a real shout-out at all.
Posted by Jeff Allard at 4:06 AM

Email ThisBlogThis!Share to TwitterShare to FacebookShare to Pinterest
Labels: Terror in the Aisles, The Oscars, Worthless Tributes

I wholeheartedly agree with your comments on this Oscar misfire. Great observation about Terror in the Aisles. I was briefly excited about the potential but it was pretty darn bad. And with so much recent horror in Hollywood, I'm surprised so much of that was overlooked.

I agree - horror's recent years didn't get much love at all in last night's tribute.

Yeah, it was a real "whatever" moment, seemed mostly cobbled together just so they could have those two Twilight children on stage together. Kinda lame, although I liked that it began and ended with clips from JAWS.

One of my biggest pet peeves ever is when people try to argue that Silence of the Lambs is not a horror movie. Get off your high horse folks. Just 'cause it's well directed, acted, and prestigious does not make it a thriller.

I agree on the presenters, which I may have excused had Kristen Stewart summoned even one REd Bull sip of energy to actually emote when speaking. Ah well. At least I finally got my dream of seeing Chucky at the Oscars.

Will, giving Jaws some love never goes out of style!

Emily, I'm with you all the way on Silence of the Lambs. Funny that it wasn't mentioned in the intro but showed up in the clip reel. Maybe the Academy just couldn't bring themselves to admit out loud that a horror film had ever won Oscar's highest honor.

As for Chucky's appearance, that was cool. I probably ought to take a 'glass is half full' outlook on the tribute but I just don't think it would've taken much effort to deliver something more worthwhile.

'Maybe some love is better than none...', said the man as the dog humped his leg.
This sounds pretty irritating...
Glad I missed it.

... and agree with your thoughts on Terror In The Aisles, though it would be nice to see a well-done version of that sort of thing... a Ken Burns documentary series on the history of the horror genre in various mediums.

I just rewatched the scene and you know...it hasn't aged well. And by 'aged,' I mean two days later and now sober, the choices are somewhat baffling and the choice of presenters is just painful.

So in my case, the glass was half full when there was alcohol inside. Now that it's water...

Knob, a real documentary on the horror genre is long overdue. Probably the best effort I've seen along those lines is American Nightmare (2000) but that was centered on American horror movies of the '70s so a more wide-ranging doc is in order.

And Emily, booze makes everything better! Truthfully, though, even if the montage had been spectacular and gotten everything right, it still would've been forgotten by now. It was a clip reel to fill time during the already overlong Oscars. The lack of effort spent on it speaks to a lack of respect for horror on the Academy's part but maybe if horror wasn't the perennial underdog that it is, it wouldn't be quite as much fun to be a fan!

I also forgot one thing I loved about this: "Many of the people sitting in this room got their start in horror."

As if to say "c'mon guys. Give thanks for your first paycheck now and we'll never talk about it again."

Yeah, they probably regret taking the time to mention horror in the first place. I think the one upside to their tribute is that we likely won't see them bother to do another for many years to come - if ever.

I don't know, I kind of loved the ridiculousness of the one year John Stewart hosted and about 30% of the telecast was devoted to the most random and specific montages ever. Even Stewart had a good quip about it: "Next, an Oscar montage showing great moments in Oscar montages."