The Magic That We'll Feel Is Worth A Lifetime 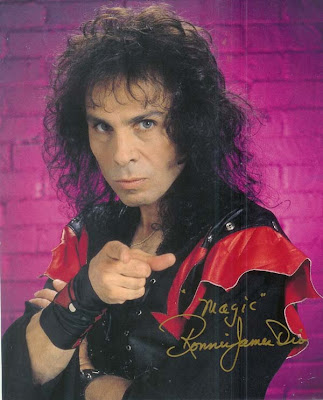 In the Further Proof That Cancer Is Fucking Evil department, heavy metal great Ronny James Dio succumbed to his battle with stomach cancer this morning at age 67. If you grew up as a metalhead in the '80s, or if you just appreciated peerless powerhouse vocals, you were a fan of Dio's. Whether in Rainbow, during his stint as Black Sabbath's frontman after Ozzy Osbourne's departure, or in his solo career, RJD was one of the all-time greats. Besides the strength of his operatic vocals, I love Dio because he was from that now long-gone era of metal where even if the imagery of the lyrics and the LP art veered into the cartoonish, it was never played as a joke. When Dio flashed the devil sign, or prowled through a video in a sword and sorcery get-up, it wasn't meant as a post-modern goof, it was all 100% sincere. Hard to believe that a voice so powerful is no more.

One of the other things I liked about Dio was that, no matter how "evil" the image, he always gave off a positive vibe. I was lucky enough to see him live 3 times with his solo band and once with "Heaven and Hell" (Black Sabbath in all but name), and he always sounded just as good live as he did on album. He was one of the last reminders of a time when metal vocalists were expected to actually be able to sing, not just bark and growl, and the music world is a poorer place for his passing.

Bob, thanks for mentioning Dio's aura of good vibes and positivity. That's definitely one of his stand-out qualities!