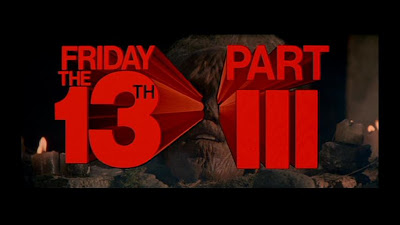 The novelty of 3-D didn't come to Elm Street until Freddy's last hurrah. Jigsaw has been putting victims in mere 2-D traps up until the seventh Saw. Friday the 13th, however, went 3-D at the first opportunity. Sure, timing had plenty to do with it - after all, 3-D had its second coming in '82-'83, just as Friday the 13th was coming up as a franchise - but given that the series has gone on to last twelve films so far (including Freddy vs. Jason and the 2009 remake), I think it's funny that as quickly as Friday's second sequel, the producers felt they needed a gimmick to maintain interest. Jaws needed it and so did Amityville but were viewers already so bored with the Friday formula after just one sequel that 3-D was the only way to guarantee another hit for Paramount? I don't think so but why look a gift horse in the mouth? Even though I was too young in '82 to see this in 3-D, instead of being bitter about it, I'm glad that other fans were able to enjoy that experience and share a joint with Chuck and Chili. 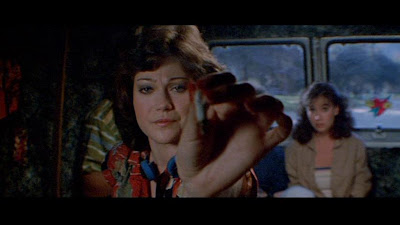 To read Ryan Turek's full Summer Shocks review of Friday the 13th Part 3 over at Shock Till You Drop, click here.

I bought the 3D re-release of this and have yet to watch it. I can only imagine the 3D will make my brain bleed, but I think the fact that I wish I could have seen some of these movies in theaters, in 3D, is really why I picked it up. What's funny is, I hate all of the modern 3Dsurge, even though it does look great when done right.

Yeah, I'm mostly good with the modern 3-D wave. Except when they convert a film that wasn't meant to be 3-D just because they want to squeeze more money out of people. My Bloody Valentine and Final Destination were a ton of fun in 3-D and the Piranha remake should be great.

The 3-D on the Friday 3 disc is kind of unwatchable, in my opinion. I gave it a shot and couldn't get past the opening credits. Maybe it's just me, though.