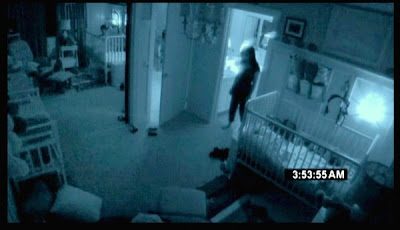 A few weeks ago, Hatchet II came out with a big push among the internet horror community to "support unrated horror." Personally, I think supporting scary horror sounds like a better way to go so I'm throwing my endorsement behind Paranormal Activity 2, one of the scariest horror movies to come along since, well, Paranormal Activity.

Great review! It is the first one I have read for this film and it has me actually excited to see it 9which I am going to do today.)

Mina, Jen - thanks for the comments. Hope you like the movie!

And yours is the review I've been waiting to sway my decision. Great review and I'm going to see it tomorrow.

By the looks or sound of it, it does appear that the made the characters more likeable on purpose. Just my feeling. And that's great because that was a minor detraction for me in the first film.

I've been hard-pressed lately to think of too many films that feature working class or lower/lower middle class characters. Middle class or upper middle class is through the roof, but it is getting more noticeable, particularly in the Bay-produced remakes.

I have an uneasiness towards directors who want to come off as fanboys, so it is probably a good thing that I don't read too many popular horror news sites. Yeah, Eli Roth knows his stuff, but I have yet to like or enjoy any of his movies.

Unless I hear something that really bowls me over, I will wait for the PA2 DVD. I was not a fan of the first film. But I'm glad that the characters in this are more likable. I do not want to deal with another Micah character.

Cortez, I hope you won't feel I steered you wrong on this! But I do think that PA 2 is a sequel that's on par with, or better than, the original.

Sarah, it is crazy how rich characters in horror movies have become. I think of films like the Prom Night remake, The Haunting of Molly Hartley and The Uninvited where characters live in houses that you and I will never afford (well, I know I won't). Even the remake of The Stepfather had a single mother somehow living in a gigantic home. I think Hollywood is just so out of touch with how most of America lives. But...that's a subject for another post, I guess.

As for the rise of fanboy directors, it's an obnoxious trend to me. On the one hand, it's cool to think that, hey, a real fan is making horror movies yet on the other hand, if the movies they come up with are garbage like Halloween II it's a "with friends like these..." situation. You know, you can say all you want in interviews - if your movies don't deliver then you're not doing the genre any favors.

And don't worry, no character in PA 2 will annoy you like Micah - although Micah himself does show up briefly.

Missed this when you originally posted. I was very much surprised to find I liked PA2, since I was very negative towards the first one. Micah was a big part of that, but I also felt the first film was too loose, and I never bought into the characters as real people. That wasn't a problem here. The "ethnic nanny who knows all about the supernatural" threatened to go into caricature territory, but I think the film just narrowly escaped that trap. All in all a solid flick. And yeah, nothing against Adam Green, but I don't care if my horror is unrated or G rated. I just want it to be good.

Yeah, Green has picked the wrong decade to be railing against the injustices of the MPAA. Hatchet was nothing special and I can't imagine that Hatchet II is much better.