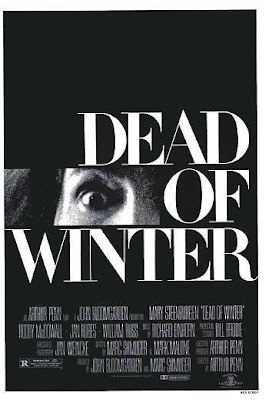 Back in 1987, Dead of Winter was meant to be the kind of old-fashioned suspense picture that had gone out of style in the age of special effects and slasher films - a classy, adult alternative to the bloodbaths that had become so popular since the success of Friday the 13th (1980). Directed by Arthur Penn (Bonnie and Clyde, 1967) in the twilight of his career and starring the then-thirtysomething Mary Steenburgen in three roles - primarily as Katie McGovern, a struggling actress, but also as twin sisters - Dead of Winter had a higher pedigree than most of the teen-centric horror offerings of the time.

As Dead of Winter opens, a woman is murdered too soon by the men using her as a puppet to demand money from the woman's wealthy twin sister; the men then must find a way to convince the sister that her twin is still alive and continuing to blackmail her, which leads them to find an actress who resembles the dead woman and then invite her to a remote, upstate home under the pretense of having her take over for a film's departed lead actress. As it happens, Katie proves to be a dead ringer for the deceased girl.

Once Katie happily accepts the job offer and rides off with the creepy Mr. Murray (Roddy McDowell) to the secluded home of his employer, the elderly and wheelchair bound Dr. Joseph Lewis (Jan Rubes), she becomes suspicious that she hasn't been told the whole truth - a suspicion that starts with her discovery of Polaroid pictures of the corpse of the woman she's meant to replace. Dr. Lewis has pat explanations for all of Katie's concerns but eventually the truth comes out that she's just a pawn in the doctor's blackmail schemes. Soon, after making an escape attempt, Katie finds herself drugged and her left ring finger removed, matching an act of mutilation that had been performed on the dead twin. Will Katie find the wherewithal to outsmart her captors and return to her dick boyfriend, Rob (William Russ)? The answers can be found on the edge of your seat!

Well, almost on the edge. While I remember enjoying Dead of Winter back in '87, time has not been kind to it. As a suspenser, it's pretty tepid and, worse than that, the story is ludicrous with the nefarious blackmail plans of Dr. Lewis requiring more labor than NASA puts into a moon launch. I'm sorry but there's got to be easier ways to make money. And Dr. Lewis doesn't seem to be hurting for cash in the first place so you wonder how all this aggravation can be worth it to him. Furthermore, he's old - when is he going to have the time to spend all this cash before he dies? You'd have to have a villain really desperate for the money to make the audience believe that going through this charade is worth their while. But then, anyone that desperate for the money wouldn't have a large home in upstate NY to keep a damsel in distress in. They'd be doing the sensible thing and breaking into a rich dude's house to rob them (now that would've been a great twist in Dead of Winter's plot - while Dr. Lewis is bending over backwards to pull off his comically elaborate blackmail scheme, some lowlife criminals bust into his house and rob him for everything he's got).

Steenburgen is fine in her multiple roles but the plot device that requires her to play all three parts seems, like the rest of the movie, to be needlessly complicated. That Katie resembles a dead woman is one thing but to have that dead woman also be a twin, allowing Steenburgen to play that third character as well, is just one step too far. The climatic pay-off - when Katie draws on her acting skills to temporarily fool Dr. Lewis and Mr. Murray into thinking she's the still-living sister they're out to extort - just isn't worth it. Especially when that clever ruse really isn't necessary for Katie to escape.

The cat and mouse games that Dead of Winter engages in are slack all around. Dr. Lewis and Mr. Murray seem to be counting solely on the inclement weather to prevent Katie from running for help. Occasionally they'll drug her drinks but she always wakes up in a room alone and unrestrained. Dr. Lewis' house is more like a bed & breakfast than a prison. And while Steenburgen is no Cynthia Rothrock, if she put up any kind of determined fight I do believe she could get the best of Roddy McDowell, whose character's talents lie more in hair-dressing than in strong-arming anyone. That just leaves the elderly, fat-assed, wheelchair-ridden Dr. Lewis to contend with and that's someone even Bonnie from What's Eating Gilbert Grape (1993) could successfully run away from. Well, kind of.

Dead of Winter was greeted as an anomaly at the time of its release and it's even more of one now. Not because of the lack of violence but because of the fact that it's a woman in peril film. Those were common in the '80s, with almost every slasher film fitting into that category but good luck finding anything like that now. In recent years, there was P2 (2007) - the one where Wes Bentley terrorized a businesswoman in a parking garage - and in very limited releases, House of the Devil (2009), where a college student is stalked through a house by satanists and the Kim Basinger film While She Was Out (2008).

Somewhere along the way it stopped being fashionable (or PC) for women to be presented as vulnerable or endangered. Now it's all about Milla Jovovich and Angelina Jolie being able to somersault backwards out of helicopters while firing Uzis in each hand. It's not enough for members of the fairer sex to simply be resilient anymore, women have to be full-on superheroes.

Blame Aliens (1986), maybe, for making Ripley the template for future sci-fi/horror heroines (even Barbra, in the 1990 Night of the Living Dead remake had to become Ripley-fied). Or Buffy, or Xena, or Trinity from The Matrix. I love all those characters but they've made it hard for women to be portrayed in peril. When even barely adolescent girls are depicted as lethal weapons, as in Kick-Ass (2010) and the upcoming Hanna (2011), I think it's hard for horror and thriller filmmakers to depict an adult female protagonist spending too much time cowering in fear, even if it's for the good of the movie.

I'd like to think that the largely favorable response to director Ti West's House of the Devil could be a sign that the classic model of horror heroine can come back into style. But we'll see. Like Dead of Winter, House of the Devil wasn't a particularly good movie. At least in both cases, though, I felt like their maker's hearts were in the right place. But then, I'm old-fashioned when it comes to this stuff.

Haven't seen this one, but I have seen House of the Devil. I loved the fact that it was released on VHS. For that reason alone, I wanted to dig it, but it was murderously slow. 'Tis a shame. Ti West is a talented guy. I hope that he hits his stride as a storyteller.

I agree Dom. House of the Devil didn't do it for me at all. There's a difference between a slow burn and just slack pacing and House was all about the latter, in my opinion. But I'll watch his next film in the hopes that I'll like it more.

I worked on the Wheat Brothers'film Lies and they were crushed to learn of Dead of Winter, with which it shares its premise and many similarities, beat them to release.

They briefly considered suing, as Lies had made the rounds some time earlier. But DOW turned out to be a remake of a much earlier film, to which MGM had the rights.

Somebody should sit down and compile a list of all the same-premise films that come out at roughly the same time. It's a curious phenomenon.

I agree, Paul. It's interesting how often similar projects will come about independently of each other. For whatever reason, it seems like certain ideas are destined to come to fruition at the same time.

Speaking of ideas, Paul - thank you for creating Concrete. I love that character!