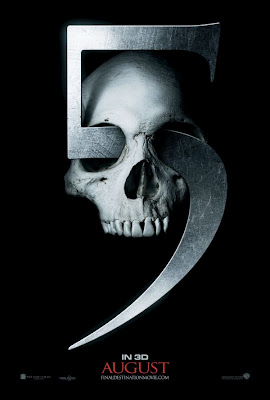 Even without a numerical assignment and with a definitive-sounding "the" attached to its title, few horror fans were conned into thinking that 2009's The Final Destination was a sign that the franchise was making a graceful goodbye. Sure enough, just as calling Nightmare 6 Freddy's Dead didn't really mean that Freddy Krueger would stay dead and just as the title Friday the 13th: The Final Chapter turned out to be something of an exaggeration, this summer will bring the latest installment of the Final Destination series - simply titled Final Destination 5.

I already mentioned my excitement for this movie in my summer preview and the glimpse that we've gotten of Final 5 this week of its teaser poster and trailer have only assured me that my excitement was not misplaced (when is it ever?).

When the first Final Destination came out in 2000, it was embraced as a novel twist on the slasher formula. It was a body count movie but instead of its cast of pretty young faces being stalked by a heavy-breathing psycho or even by a wise-cracking supernatural entity like Freddy, Death itself was picking off the film's characters.

Taking a page from The Omen series but sans any theological baggage, Final Destination had its characters perish in elaborate, and apparently freak, accidents. A slasher series without a slasher, the Final Destination films didn't have to axe its characters via such played out methods as machetes, power tools, or, well, axes. Sure, those instruments could all play a part but now the palette was expanded as everything around the characters - from airbags to gas grills - was potentially lethal. They say that variety is the spice of life but it's also the spice of death.

If the job of horror films is - at least in part - to remind us of our own mortality, then the Final Destination films have that covered and then some. When you leave the theater after seeing a Friday the 13th or Saw film, unless you're having issues with reality, it's not with the thought that Jason or Jigsaw - or anyone like them - might have their murderous sights on you. But yet it's entirely possible that you might die in some seemingly random manner. In real life no one being stalked by a cinematic slasher but everyone is, in a real way, being stalked by Death.

While I feel confident that I won't be done in by a machete-wielding psycho and feel exceptionally confident that I won't be killed in my sleep by a dream dwelling boogeyman, I know that there's every chance in the world that I could be turned to red paste in a freak accident on the highway or be sucked into an escalator or something. In actuality my death will probably be due to some much more mundane cause, like a heart attack or cancer but then again it might result from an incredibly unlikely and unforeseeable chain of events involving a jelly jar, dental floss, a house fly, and a kite.

The Final Destination films are not intellectual exercises (even though an analysis on their stance on Fate vs. Free Will might be interesting) but they do tap into something that is universally understood - that no one is immune to being in the wrong place at the wrong time. If Death comes looking for me on August 12th, I'll be easy to find - I'll be watching Final Destination 5.

Yep, these movies have been pretty consistently entertaining. I love the red herrings of imminent danger on display... only to have the character go out in some other, totally surprisingly horrible way... that airbag gag caught me completely off guard.
Maybe I should feel some sort of guilt over such a blatant 'watch them die' sort of entertainment... but... well, I'll save that for later.