How I Learned To Stop Worrying And Love Underworld 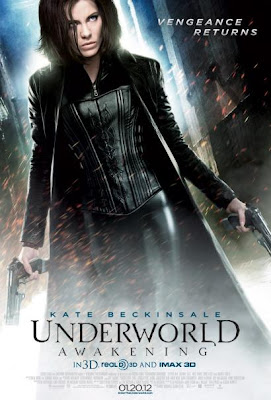 When the first Underworld arrived in 2003 - a film that no doubt owed its existence to the then-current Blade series which had made the mix of action/horror and vampires a hot box office commodity - I felt lukewarm towards it. It was a little too glossy and a lot too CGI - not the kind of werewolves vs. vampires movie I was looking for.

In 2003, Underworld was too easy to shrug off in favor of more diverting offerings. You know, like Wrong Turn, Haute Tension or the remake of Texas Chainsaw Massacre. But while genre trends have come and gone in the years since, Underworld has kept chugging along. And while the films haven't gotten any better, I like the fact that the new Underworld movie in 2012 looks exactly like the original Underworld movie from 2003. Same blue/black lighting, same costumes, the same shit CGI. While Underworld: Awakening represents no special leap in quality for the franchise, I've come to appreciate the fact that these films are stylistically frozen in time. Their unchanging nature has made them into a comfort food kind of experience.

I didn't pay enough attention to tell you who directed this latest Underworld or who wrote it and I'm uninterested in looking up that information so don't consider this a real review of any kind. All I can say is that I had a fair amount of fun watching this, more fun than I've had with any other Underworld film. That might have to do with my mellowing attitude towards the series (or my mellowing attitude toward life in general) but I also would say that this has substantially more action than the previous installments (it seemed to me that Kate Beckinsale had even less dialogue here than non-actress Gina Carano did in Haywire*). Maybe the people behind the series finally realized that there was never anything interesting to be said by any of the characters in these films so it'd be better to just have them all fighting non-stop.

If so, I applaud that decision.

* By the way, if I can make a non-genre recommendation, Haywire is a really solid piece of work. For some reason, audiences seem to be down on it (it earned a D+ on Cinemascore) but I think anyone with a taste for action cinema will enjoy it.
Posted by Jeff Allard at 7:25 AM

Looking forward to seeing it this weekend. I've never been a huge fan of these...but this one is getting good reviews for some reason, I guess it must be fun.

I haven't checked out any other reviews on U:A but I found it fun and I'm not surprised to hear others did as well.

I think I was mildly amused by the first one and might have somewhat liked the second one. The 3rd one I snuck into and took a nap. Maybe this one will be ok or in the least good for a nap.

Funny, I snuck into Underworld 3 after seeing the abominable Friday the 13th remake and was shocked at how much I enjoyed it. Granted, that one gave Bill NIghy and Michael Sheen the whole screen (Beckinsale had just a cameo) and was set in the middle ages, so there was a lot more aimed my way. I still haven't seen any of the others, but I like you, I respect the fact that it's found its own way. Hey, it's an original world, and female-centered at that. So while the other films are probably not my thing, I'm glad they've found an audience.

And what's up with the Haywire hatred? I wonder if it's the same audience that hated Drive (which I still haven't seen) for getting a smarter action film than they were expecting.

I'm totally perplexed by the negative reaction to Haywire. It's no classic, granted, but it's a solid enough action film and, really, not all that artsy. Drive I can understand people not being into so much - even though I loved it - but Haywire seems to be more of an obvious crowdpleaser. Shows how much I know about audiences these days.

I bet Soderbergh is equally non-plussed by Haywire's reception. On TMZ the other day, they spoke with him at some airport and the first question they asked was "How's Haywire doing?" and his answer, without missing a beat was "Terrible." You've got to love someone who doesn't try to put any spin on a disappointment. Still, I think it's a good movie that just didn't click with many people for some reason.