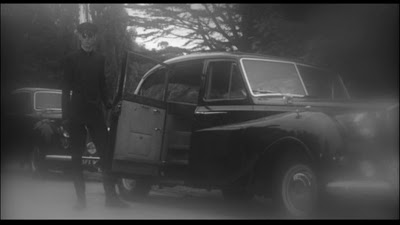 Despite its avid and enduring fanbase, Dark Shadows never caught my interest, even as a kid, but yet several of producer/director Dan Curtis' other genre offerings indelibly shaped my childhood. With Dark Shadows currently in theaters, I decided to revisit one of my favorite Curtis efforts outside the gothic world of Collinwood, 1976's Burnt Offerings for this week's Retro Shock Theater column at Shock Till You Drop.

And for whatever reason, I forgot to link to the previous RST column, a look back at Romero and Argento's Edgar Allan Poe tag-team effort, 1990's Two Evil Eyes. I put my two mildly rascally eyes on that one in honor of the release of The Raven and just to chime in briefly on that movie - it was pretty awful.
Posted by Jeff Allard at 6:10 AM

Y'know, I didn't like Two Evil Eyes at all. I suppose that Romero's half was tolerable, but Argento's half...yuck.