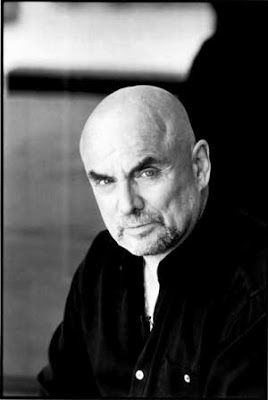 Just the other day, I was waxing nostalgic about legendary announcer Ernie Anderson and now, sadly, it's been reported that voice-over artist extraordinare Don LaFontaine has passed away at the age of 68 due to complications from pneumothorax. While every movie fan has their favorite memories of hearing LaFontaine's voice long before they knew the name behind it, the trailers that stay with me the most are for the first four Friday the 13ths.

When I was twelve, I saw the trailer for the original Friday the 13th on The Movie Channel while on an out-of-state family visit to my grandmother's home in New Hampshire. I had seen the Friday TV spots previously to this, when the film was released in theaters, but seeing the full trailer really got my attention. Thanks to LaFontaine's ominous baritone inaugurating Friday's trademark body count as bold red numbers flashed on the screen, I thought this was the most intimidating preview for a horror movie I had ever seen. And as it took at least another year for me to be allowed to watch the film itself, it was this preview and LaFontaine's voice that kept me determined to see it. I just knew I couldn't be a true horror fan until I had.
I love the trailer for 1981's Friday the 13th Part 2, because whoever wrote it didn't even try to get their facts straight about either the original Friday the 13th or Part 2! As we see returning heroine Alice (Adrienne King) nervously creep through her apartment, we hear LaFontaine intone: "On a June night in 1980, Friday the 13th, twelve of her friends were murdered." Well, if outside of Steve Christie you mean "people she just met that day" (including one she never met at all!) instead of "friends", then sure. And if by "twelve", you really meant "seven", then that'd be true. And even though the sequel takes place five years after the original, which would make it 1985, LaFontaine asks "why should Friday the 13th, 1981 be any different?"

By the time 1982's Friday the 13th 3-D rolled around, Jason was already on his way to being a full-blown icon. This was the first Friday trailer where LaFontaine got to call Jason by name ("These are Jason's woods...") and it instantly validated Jason as a movie monster to be reckoned with.

Finally, four years of mayhem came to a head with 1984's Friday the 13th: The Final Chapter ("Three times before you have felt the terror, known the madness, lived the horror. But this is the one you've been screaming for"). This trailer rocked with LaFontaine delivering his most dramatic lines of all the Friday trailers to date ("...He moves like a shadow, dark and silent. He never utters a word. He doesn't even seem to breathe. He simply, mindlessly, mercilessly...kills.). I feel that this one trailer did more to evoke a sense of character for Jason than the movies themselves ever did. And even though the series was back in business in just another year and LaFontaine was still narrating the trailers, it never quite seemed the same.


LaFontaine's contribution to the world of movies was one that we took for granted, even as over the course of his career he helped scores of films of every genre find their audience. Among those thousands of films, the Friday the 13th movies may have been just a drop in the bucket but his voice on those trailers helped make me a Friday fan for life.
Posted by Jeff Allard at 4:17 AM

Excellent post and thanks for including samples of LaFontaine's work. He was truly one of a kind and a bigger part of my life than I ever realized! _UNK

Thanks, Unk! Yeah, LaFontaine is going to be an impossible act to replace. I just feel bad for the generations of movie fans to come who won't get to feel the impact of his work.

They just don't make trailers like that anymore. Don will be missed.