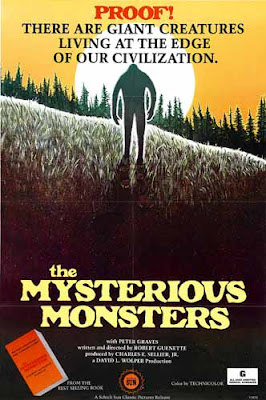 My pals over at Kindertrauma recently posted two Bigfoot-related items and reading about our friend in the forest forced me to recall one of my fondest childhood memories, the 1976 Sunn Classics documentary The Mysterious Monsters. Narrated by Peter Graves, this film purported to blow the lid off the greatest secrets of their day and reveal the truth about the elusive likes of Loch Ness Monster, the Abominable Snowman, and Bigfoot. Naturally, my seven-year-old self was ecstatic to finally get some answers! And as this movie was out before the TV series In Search Of... began its run, this really was bringing me something I hadn't seen before.


My hard-working mother obligingly took me to the theaters to see this explosive expose and watching the below segments of the film for the first time in over thirty years (I was surprised to find that the entire film is available on YouTube), I have to either marvel at my mother's ability to keep it together in the face of unintentional hilarity or reevaluate my entire upbringing because I now have to worry that the woman that raised me didn't instantly view this as a comedy. Of course I'm sure the truth of it is that any interest she feigned in this movie was just an effort to kindly indulge her dim-witted son.


Having said that, I can understand why this movie was terrifying to me as a kid. The middle reenactment seen in the above segment as Bigfoot attacks a woman watching TV in her living room is the scene I remember most from my original viewing of the film. The dramatic full-on look at Bigfoot's face at 3:17 as the woman's boyfriend whips open the front door to see Bigfoot himself standing there is actually pretty sweet (I believe Tom Burman's studio was responsible for the Bigfoot make-up and outfit). It's such a scary sight that I'm surprised I didn't force my mother to end our night short right there.

But what catches my eye most in the above clip is the polygraph examination of Bigfoot witness John Green. As Green is readied by the polygraph expert, Peter Graves assures us that Green's test will be filmed strictly from behind a two-way mirror ("our cameras will not intrude on the examination...Johnny's reaction will not be altered by our presence."). But as the interview commences, we see it from at least four different angles! My favorite moment is when the film cuts to Graves and his cameraman filming intently from behind the glass (how they're supposed to be filming past the camera that's filming them, we don't know), then there's an immediate cut to a side shot of the interviewer taken from inside the interrogation room! Sorry fellas, I'm older now - you can't slip this shit past me anymore!


By the film's end, Graves conclusively notes that with the amount of evidence proving the mysterious man-beast's existence, "Bigfoot is as much a part of our lives as the gorilla or the Loch Ness Monster." How gorillas got lumped together with Bigfoot and the Loch Ness Monster, I don't know but when Graves insists that "Bigfoot is today free to roam the forests of America, living off the land but leaving no trace of his passage except for an occasional footprint", I wanted to press Graves on the issue of where Bigfoot takes care of his, um, business. Because if it's not in the woods, I think an explanation is in order. Even for a legend, nature calls.

As a documentary, The Mysterious Monsters may be a farce but that's fine. No film that thanks both The Academy of Applied Science as well as The Bigfoot Information Center in its end credits can ever be considered a total loss.
Posted by Jeff Allard at 7:11 PM

Email ThisBlogThis!Share to TwitterShare to FacebookShare to Pinterest
Labels: The Mysterious Monsters

"The middle reenactment seen in the above segment as Bigfoot attacks a woman watching TV in her living room is the scene I remember most from my original viewing of the film."

Truly one of the defining moments of fear of my childhood, surpassed only by JAWS himself.