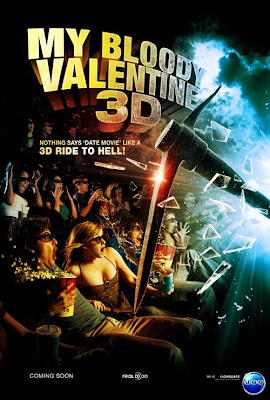 This poster for the upcoming release of My Bloody Valentine 3-D isn't particularly good in the sense that it's goofy as shit. On the other hand, for the exact same reason it's one of the best posters I've ever laid eyes on! I am pumped, brother! Sure, it would've been nice to see a more dramatically designed poster, one that kept more of a horrific mood, like the kind that accompanied the resurgence of 3-D in the early '80s: 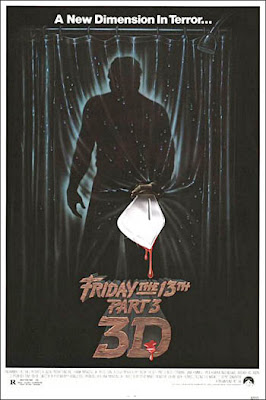 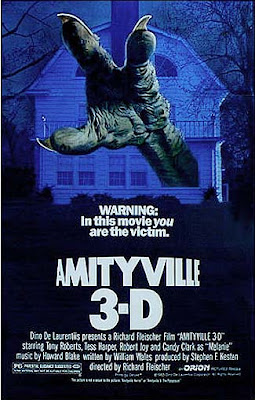 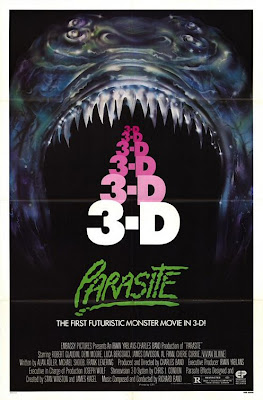 ...Even House of Wax's 1982 re-release boasted a cool new poster with a dark-clad figure thrusting a melting candle out from a movie screen to hold dripping over a screaming audience. So compared to those, this My Bloody Valentine poster isn't in the same league - or maybe that's just nostalgia getting the better of me.

But yet it promises something that's sorely been lacking in genre films lately, and that's fun. I can't think many horror films I've been genuinely excited to see recently - either in the theater or otherwise. Even if it's a film I end up liking, the anticipation wasn't quite there. But I guarantee that I'm counting the days till this arrives on the big screen. I remember watching Beowulf last year and wondering how long it would be until someone put the new 3-D technology to use on a horror film and the fact that My Bloody Valentine will be the first of at least three (R-rated!) 3-D horror films next year (Piranha and Final Destination 4 being the others) makes me ecstatic.
Questions of quality aside, just the knowledge that we'll be sitting in theaters next year ducking pick-axes and flesh-eating fish is to know in advance that 2009 will be a banner year.
I just hope that 3-D will eventually be put to its proper use in the service of a 3-D Phantasm remake. If the day never comes when the Tall Man's flying silver spheres can soar off the screen, then history must ultimately judge 3-D as having never reached its full potential.
Posted by Jeff Allard at 5:23 AM

Email ThisBlogThis!Share to TwitterShare to FacebookShare to Pinterest
Labels: 3-D, My Bloody Valentine

I now truly understand the phrase "died and gone to heaven"
I am alive. There is a My bloody Valentine remake on the horizon. It is in 3-D.
Anything else that occurs before my demise is just gravy.

I'm enthusiastic for this one, too; I just hope the MPAA doesn't get flustered over the idea of projectile gore and force Lionsgate to compromise.

Yeah, I hope this movie is huge! And as it's already recieved an R-rating and there's been no grumblings from the filmmakers about having to compromise, I'm guessing it earned its 'R' with minimal cuts.

If I were that guy, I'd be screamin' too. It looks like he's about to get a 8-foot long pick axe in the crotch. Nothing says "date night" quite like that.