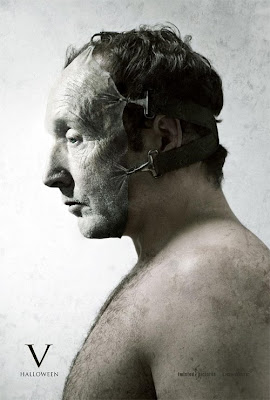 The only good thing about Saw V is that I hope the inevitable derision this sequel is met with by even the series' hardcore fans will finally let other studios see that Halloween is no longer off-limits from competition. Lionsgate has staked out Halloween as their own private turf over the last five years and in turn, other studios have all-but ceded the month of October, going along with Lionsgate's hype that "if it's Halloween, it must be Saw". But I think there's an unsatisfied hunger out there for alternative fear fare and that the Saw films are about as un-Halloween as you can get. If Warner Bros. had put out their long-shelved anthology Trick R Treat this year, it would've rolled right over Saw V. Honestly, I believe it would've done the same last year back when it was originally scheduled to come out.

At this point, the Saw films are doing well because there's no alternative for audiences looking for a Halloween horror fix. It's like being the only restaurant in town. Quarantine performed well earlier this month, though, and I bet it would've done equally well had it gone head to head with Saw V this week. Maybe it's because most studios executives don't really care to consider what horror fans want (or to believe that horror fans have opinions about what they want, like actual discriminating moviegoers) that they're content to let Lionsgate have Halloween to themselves.

But I think audiences will take the first opportunity they can to make it known that they're ready for something else. Like any franchise, Saw will continue to have its core fans who will follow the series regardless of declining quality but there's a huge opening for something else to come along and steal the wider market. I'm curious to see how the teen-friendly The Haunting of Molly Hartley will do this coming weekend. I don't think it'll be quite the film to overtake Saw but it could do well enough to prove that at this point anything else has a shot at succeeding on Halloween. There's no need for other studios to sheepishly back away from Saw anymore. The Haunting of Molly Hartley may not kill Saw this year, but it could draw first blood.
And if it bleeds, we can kill it.
Posted by Jeff Allard at 2:56 AM

Yes please, please kill it. I am soo sick of saw.

Yeah, I'm fond of my own share of crappy franchises but Saw just does nothing for me. To be fair, I'm sure fans who were in their thirties in the '80s felt the same way about all the stuff I followed as a teen.