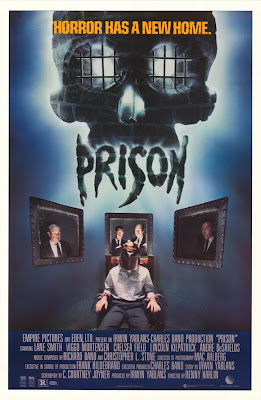 The first burden of anyone telling a haunted house story is to invent some excuse for their characters not to haul ass out the door at the first demonic whisper heard coming from the cellar or the first time black ooze churns up from the toilet and, for the most part, these are always lame contrivances. You know 'em all - bad weather, physical instability, sometimes just stubborn disbelief. Director Renny Harlin's Prison, however, hits on the perfect rationale - all its characters are locked in.

Based on a story by producer Irwin Yablans (Halloween) with reliable Empire and Full Moon scribe C. Courtney Joyner penning the screenplay (Joyner's name will be familiar to fans of '90s direct-to-video fare, with Trancers III, Lurking Fear, Doctor Mordrid as well as many of the Puppet Master sequels all to his credit), Prison is best described as The Shawshank Redemption meets The Shining, replete with an array of pre-CG splatter FX.

When a prisoner named Charlie Forsythe is wrongly executed in the Wyoming State Penitentiary in 1968, the facility is closed for years. But when overcrowding in surrounding prisons force it to be re-opened to relieve congested conditions, merciless warden Ethan Sharpe (Lane Smith) - a man who was intimately involved with that unjust death in '68 - finds that bars and cells can't keep old ghosts at bay. The new crop of arriving inmates, sent to the prison early to serve as a work crew to ready the prison for its official re-opening, will have to contend with both Sharpe's sadism and the malevolent force that haunts the prison grounds.
Representing one of the best 'guy' casts to be found in a genre film (along with Carpenter's The Thing and 1999's predominantly male cannibal opus Ravenous), Prison is stocked with seasoned character actors. The late Lane Smith is a stand-out as Sharpe, as is Lincoln Kilpatrick (familiar from hours of episodic TV in the '70s an '80s) as longtime inmate Cresus. Tom Everett of Texas Chainsaw III is the wily, escape-bound Rabbit; '80s wrestling superstar Tommy 'Tiny' Lister plays the hulking but good-intentioned Tiny; and Viggo Mortensen is Prison's lead in an early role as the brooding, newly incarcerated car thief Burke (even horror fave Kane Hodder is here under heavy make-up as the resurrected form of Charlie Forsythe).
Chelsea Field (Dust Devil) appears as the lone female of the cast, in a superfluous role as an official advocating penal reform. Field does the best she can with her part but whenever Harlin cuts away from events at the prison to continue her character's subplot, the film's tension is undermined. Harlin and co. should've stuck strictly to their male roster and kept the audience behind bars for the duration of the film.
Harlin foreshadows his work on the fourth Nightmare on Elm Street film here (an assignment which this film landed him) by staging a number of elaborate supernatural set-pieces, slaying characters by a variety of surreal, inventive means. One character finds himself impaled multiple times by steel rods that emerge from the walls of a shaft the hopeful escapee is crawling through. Another is burned alive when the cell he's in suddenly becomes a red-hot death trap; yet another victim is dispatched when yards of barbed wire wraps itself around them.
These gruesome deaths are all vivid and unpredictable - enough to mostly distract from the fact that Joyner's screenplay leaves too much unexplained to ever gel as a story. The vengeful spirit goes after prisoners as well as guards - but why is that? Why would it not just go directly for Sharpe? Joyner also suggests that Burke might be the reincarnation of the wrongly executed man but drops that possibility just as quickly. And for all its loose-ends, the film ends on a frustratingly abrupt note.
But yet Joyner's script supplies Harlin with the necessary framework to make Prison an effectively stylish work, filled with enough blue backlighting to rival Michael Mann's 1983 The Keep (ironically, Harlin's new film, 12 Rounds, opened this past weekend against the staunch competition of another ghost tale, The Haunting in Connecticut). Empire Productions wasn't known for its high success rate (outside of their collaborations with Stuart Gordon - though I will admit to having an affection for 1986's Zone Troopers) but thanks to its unique location, Harlin's artsy direction (that balances gloss and grit), bursts of grisly, garish FX and an appealing cast, this jailhouse rocks. It's just a crime that Prison hasn't been released to DVD yet.

This was always on "Telemundo" 27 in Boston. I'd sit through the spanish (that I can't understand) just to catch the kick ass gore scenes. It is too bad it's not out on DVD.

That's hilarious! It reminds me of squinting to watch the scrambled feed of R-rated films on pay channels we didn't subscribe to. As for Prison, hopefully it'll get its due on DVD one of these days.

This is a pretty underrated movie. I know Courtney (not well, but he's a cool guy) and he's always got a story. He told me that once he was hired to write a movie for Cannon and got to spend the day with Charles Bronson. Also, he was supposed to be an extra in the strip bar scene in Murphy's Law and he's got a Bronson story for that too! He's a good writer and I like him as a person a lot...

I remember enjoying this when it came out. It really is a pretty flimsy film if you look at it too closely, but Harlin's direction and the cast somehow make it work.

Amanda, I bet Joyner has a treasure trove of Charles Band stories to share, too! Even if they were on the cheesy side, I usually enjoyed any movie that had his name on it - nice to hear he's a good guy as well.

Bob, I agree - Harlin's direction was top-notch here. Too bad he's fallen so far out of the A-league as in his hey day he was responsible for some of the better examples of big budget trash.

Now THAT is a cool ass trailer, and I can see why Harlin got the Nightmare 4 gig. I looked for Prison on Cinema De Bizarre who takes unreleased to DVD movies from VHS copies and converts them to disc format. They do nice work and take requests for films, so I might get on that so I can check it out for myself.