Every Movie Should End With A Telepathic Duel 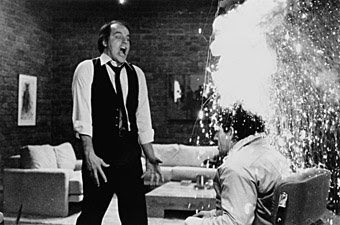 Rewatching the final fiery throwdown between Michael Ironside and Stephen Lack as brothers representing opposite sides of the psychic war in Scanners (1981) makes me think that, for the good of cinema, this the way that all movies should end.


Watch the above scene and tell me that the problems of every movie wouldn't be solved if the characters would use mental powers to rip each other to shit in the last five minutes. I know I definitely would've liked, say, Juno a lot more if that had been the case. I don't care what kind of movie it is or what the story had been prior to its mind-melting climax. It isn't even necessary for psychic powers to have been established as part of the plot because that's the thing about psychic powers - you never know when they're going to manifest themselves. Scanners didn't even have to be about scanners - Ironside and Lack could've been playing professional chefs or stay-at-home dads and its ending could still be the same.

Milk was a good movie, for instance, but I would've liked it a lot more and even added it to my home library if Josh Brolin and Sean Penn had unleashed on each other scanner style. It's not entirely true to history, maybe, to have Brolin as Dan White announce to Penn's crusading politican Harvey Milk "...We're gonna do it the Scanner way - I'm gonna suck your brain dry!" But from a movie standpoint, much more satisfying. 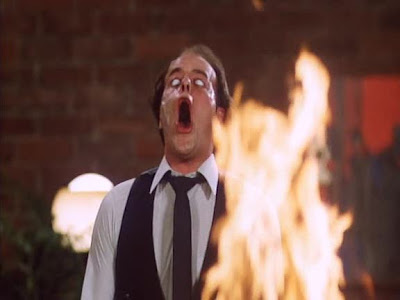 That's the great thing about psychic face-offs - no matter who loses, everyone wins.
Posted by Jeff Allard at 10:06 PM

I could go along with this idea...It could be kinda cool if it carried on to more than just humans too. How about Louis Gossett Jr. vs Jaws in Jaws 3-D? I say Gossett, because he is the only one in the film capable of telekinesis from my knowledge.

Shit, while sticking with Gossett, why not have a psychic showdown in Enemy Mine?! Alien Transvestite vs Dennis Quaid! That shit would be amazing!

Glad to have your support on this, Matt! And your comment only proves the merit of my idea. There's a few exceptions, I'm sure, where you really wouldn't want to or need to go there, like any future reboots of the Punisher franchise for example. That's sacrosant territory as far as I'm concerned. But I maintain that most movies would become much more watchable through the gratuitous use of psychic powers.

"Watch the above scene and tell me that the problems of every movie wouldn't be solved if the characters would use mental powers to rip each other to shit in the last five minutes."

This theory sounds good - until you see the SCANNERS sequels, and then it falls apart.

Ha, I was wondering when someone would point out the major chink in my theory!

So now I'm picturing the end of Sleepless In Seattle... and I REALLY wanna see the version where Meg Ryan and Tom Hanks throw down Scanners style!