The Horror Canon: 35 Horror Films You MUST See 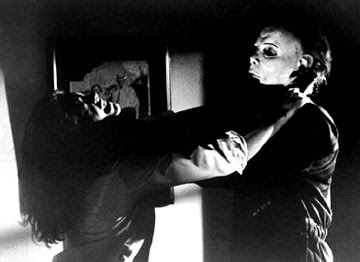 If you're a horror fan, a question that's usually asked by non-fans is: "what's wrong with you?" But a more friendly question that you also sometimes hear is: "what should I watch?" It's easy to forget that not everyone has already seen the same classics that you have. And with almost 80 years of genre cinema to explore, the uninitiated could use a suggestion or two on what to see first. Luckily, Brian Solomon (aka B-Sol) of the esteemed The Vault of Horror, has put the collective minds of the best horror bloggers to work - a group who he dubs "the Cyber-Horror Elite" - at assembling a list that could stand as "The Horror Canon". Each member had to compile a list of ten films and then the final list would be tallied from everyone's individual picks. It's not easy to choose just ten films but if I didn't comply, I'd be kicked out of the Cyber-Horror Elite and that means I'd stop getting the perks of membership - like 5% discount at all Arby's restaurants (except in Ohio) - so I had to step up and do it.

For the record, my picks were:
1. Bride of Frankenstein (1935)
2. Freaks (1932)
3. Night of the Living Dead (1968)
4. The Exorcist (1973)
5. Halloween (1978)
6. Dawn of the Dead (1978)
7. The Thing (1982)
8. The Brood (1979)
9. The Blair Witch Project (1999)
10. Audition (1999)
I don't quite stand by my list as I forgot to include the one film that I believe no list of great horror films should be without. But that's the kind of gaffe that happens when you're in a rush, right? If I had to correct my mistake, Freaks - as great as it is - would have to go to make room for Psycho (1960). Or maybe The Brood would be better left off instead - but then I don't think any list of indispensable horror should be Cronenberg-free. Other than needing to place Psycho somewhere, though, I think the list is pretty sound.
The full Horror Canon list of 35 films is now up at The Vault of Horror, and it's a pretty interesting one. Lists like this aren't so much interesting to me for what classics make it onto them, but for the newer films that do. It's a given that films like Frankenstein, Psycho, and Night of the Living Dead will be included in any "must-see" list of horror classics but I like to see what new films fans consider to be worthy of that company - even if I don't necessarily agree. Some are obvious, like Saw (2004) - other are a complete WTF, like Orphan (2009). I loved Orphan but a film that's still playing in theaters shouldn't be on a list of the Horror Canon (ranking above Jaws and The Evil Dead, no less!). If any film that recent was going to make it, it should've been Drag Me To Hell. Still, it's nice to see some excitement out there for the latest genre offerings.
As for what didn't make the list that really should've - the omission of Carnival of Souls (1962) jumps out at me, as does the absence of Carrie (1976). I mean, come on - it's not a true list of the Horror Canon without Carrie! And no An American Werewolf in London (1981), either? And not a single David Cronenberg film? And I'm not seeing Creature from the Black Lagoon (1954) on here - what gives? But of course this is what happens when people vote separately. I'm sure if all these horror-savvy people were brought together to pass choices between each other and refine the list, it would look very different and be much more definitive. But these lists are just meant to be fun, to be enjoyed, and to spark debate. And this definitely does that - and then some!

Although I believe we all made a terrible mistake by not including Popcorn (1992):

What were we thinking?
Posted by Jeff Allard at 4:50 AM

Email ThisBlogThis!Share to TwitterShare to FacebookShare to Pinterest
Labels: Horror Lists, Popcorn, The Horror Canon, The Vault of Horror

I think most lists like that annoy more than they inform... usually because the folks who bother to look are already pretty familiar with the subject and have their own personal list.
For myself I'd vote to boot out any of the 'elite' who voted for Saw... especially since they placed it over The Haunting.
Stuff like Cannibal Holocaust and the Italian Zombie movies seem like rareified tastes for afficianados... rather than core viewing experiences.

I was also surprised at a lot of the results myself, including the inclusion of Orphan, and the omission of some of the ones you mentioned. But alas, I'm just a bean-counter doing the math...

Yeah, you can't take lists like these to heart. I just look at them as a fun way to gauge what films seem to be in the front of people's minds at the moment. As far as Saw goes, it wouldn't be on any list of mine but I'm more astounded that anyone would put Orphan on their list at all. It's a very cool movie, yes, but to put it on the Top Ten "must-see" horror films is a little premature. And as far as Cannibal Holocaust and Zombi 2 goes, I would agree that those films are of a whole other category.

Hey B-Sol, it's always interesting to get a round-up of opinions - no matter what the results. I think it's cool to have a few curve balls in there, just to keep things lively.

Being a big fan of all Italian cinema, I consider films of that nature to be essential, but maybe they are second tier, or next level genre films. Like they should be on the round two batch, for the fan of horror that wants to delve further into the sub genres.

I really like your list, Jeff. Very surprised (and thrilled) to see Audition on there. I am a little surprised by the lack of movies staring Snoop Dog though! But, Popcorn will suffice!

Yo Matt, I felt that if I had to go with just one foreign horror film, it had to be Audition. As for the lack of Snoop Dogg, it was hard to not go for Bones - "Gansta of love don't eat no fried chicken!" - but somehow I talked myself out of it.

Jeff - like you said, shouldn't take lists like these to heart. But come on, Orphan over Jaws and Evil Dead...that's blasphemy. And I really liked Orphan too.

Geof, I agree - it's pretty outrageous! But whatever. I don't know who voted for Orphan or why but clearly that film has already struck a chord with people. I loved it, myself - just not THAT much!

Yay for Popcorn..."Buy a bag, go home in a box" is my favorite movie tagline ever!
-Billy

I'm with you on that, TF - Popcorn rules!