They Shoot Angels, Don't They? 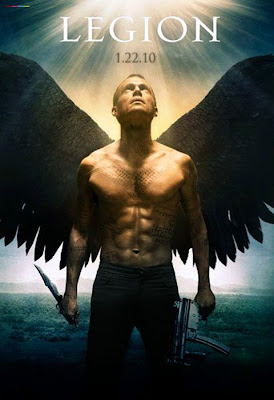 I hadn't been paying any attention at all to the upcoming film Legion (due in theaters January 2010) - about the efforts of the archangel Michael (Paul Bettany) as he tries to spare humanity from God's retribution - but now that I know from this Comic-Con footage that's been newly released (see below) that when I see Legion, I'll be smoking The Terminator, The Prophecy, Tales from the Crypt: Demon Knight, and Exorcist III in a B-movie crack pipe, I'm so in.

Based on some of the comments I've read online about this footage, some people are put off by how generic and derivative it looks. Boy, do I feel sorry for those people. Why are so many people who are obstinately fans of horror, fantasy, and sci-fi so churlish when faced with entertainment of potentially great magnitude? I don't get it. Since when did goofy, over-the-top nonsense stop being seen as a good time? Seriously, you're going to watch this footage (beware of spoilers, by the way) and say "meh"? God help you!

Call me easily excited but whenever angels open fire on each other, I'm there. When one heavenly body blows a hole in another heavenly body, it's awesome.
Posted by Jeff Allard at 10:41 PM

Email ThisBlogThis!Share to TwitterShare to FacebookShare to Pinterest
Labels: Death From Above, Hot Wings, Legion

Are people really hating on this? This looks a f'n awesome time at he cinema! Thanks for th ehads up - I watched half way through and bailed out so I wouldn;t have it spoiled too much.

And you're right, it does reek of Demon Knight...and that's not a bad thing to me at all.

Side note -- Dennis Quaid is in this movie too? Is he the next coming of Samuel L. Jackson or something?

Yeah, it seems like some people are slamming this as a generic-looking mismash. But geez, not everything can be high art! If you put a group of characters under seige by anything - whether it be angels, zombies, trucks, gang members, whatever - I'm definitely going to want to check it out.

Good move not watching the entire footage, by the way, as they do give away a little too much.

I personally think this movie looks fucking awesome! Any film with brawling angels, that do spin move, wing attacks, is okay in my book.

I know! This movie is busting out angel-fu moves - how can that not be good?