A Glutton For Punisher 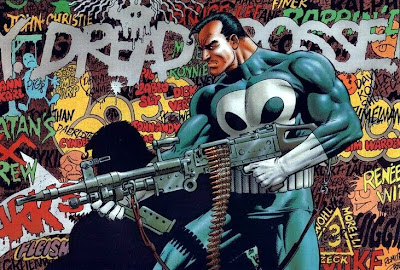 With all the attention-getting news out of Comic-Con, it's hard to say what was most exciting. I mean, when you get a glimpse of The Infinity Gauntlet it's tough to focus on anything else. But I was especially stoked to learn that Marvel now controls the movie rights to The Punisher. I suspect most people would say that three Punisher movies were more than enough - maybe even two too many - but I'll respectfully disagree. I'm a nut for The Punisher and I'll welcome as many attempts to film the character as possible. I guess I feel the same way about any comic character (guess who's pumped for Ghost Rider 2?) but I really love seeing Frank Castle go to war with the scum of the Earth.

Starting with the 1989 Dolph Lungren Punisher, I've mostly dug how Marvel's vigilante has been depicted on screen. I mean, I did raise an eyebrow at such elements as Lungren's Frank Castle spending so much time naked in a sewer and the absence of his signature chest skull but overall, that first movie was true to The Punisher. That's the thing about The Punisher, he's hard to entirely screw up. The only thing that could make a Punisher movie utterly fail is if he decided to go soft on crime.
While Lungren's film was an adequate attempt (especially for the '80s, not a great time for Marvel characters on film), the 2004 reboot, with Thomas Jane, was an improvement. It wasn't quite perfect but it was solid. Jane was a nice pick as Castle and having Roy Scheider as his dad was cool. Not so cool was John Travolta as a weak adversary. Also not so cool was the sometimes curious tactics employed by this Punisher. I just can't wrap my head around why anyone involved with this film thought it'd be smart to have the Punisher bring down Travolta's character through an elaborate scheme involving a fake fire hydrant and a series of traffic tickets for his wife. It seems more like Ashton Kutcher's M.O. rather than Frank Castle's. Not very Punisher-y at all.
That said, most of the 2004 Punisher was commendable. The film didn't quite recapture the right darkly absurd tone from the Garth Ennis-penned comic tales that they lifted most of the supporting characters from (like Joan and Spacker Dave) but at least the movie acknowledged the comics and it felt like an old-school action movie so props to director Jonathan Hensleigh for that.
The real motherload came in 2008 with Punisher: War Zone. It would've been cool to see what would've happened had Hensleigh and Jane reunited. It would've been cool to see what a Punisher movie could've been like with a more layered, literate script. But none of those things happened on this troubled production. On the upside, director Lexi Alexander cast a total beast as Castle (the imposing Ray Stevenson), indulged in more stylized comic book visuals, gave the Punisher his most famous foe from the comics (the maimed and mutilated Jigsaw), and served up all-out violence. Even better, the MPAA let it all slide by with an R. Whereas previously this movie would've been hacked down to a twenty-minute short, Punisher: War Zone went to theaters apparently untouched by the ratings board. Nice!
The fact the movie tanked (not surprising, given Lionsgate's half-hearted marketing) didn't give me much hope of ever seeing The Punisher on film again but I'm glad to find out that won't be the case. I'm not sure how Marvel will handle a Punisher movie on their own that is substantially different than any of the three films that have come before it but I'm interested to find out. The obvious way to approach it would be to take some of Garth Ennis' stories (like "The Slavers") and really stick to them. Ennis' lengthy Punisher run is one of the all-time greats, a run I'd put up against Frank Miller's Daredevil or Walt Simonson's Thor.
If they stuck to Ennis' ultra-grim version of the character and its despicable roster of villains, you'd have something really special. It also might be too rough for most audiences but who knows?
As a fan, I have to say I don't much care how well the next movie is received by the general public. History tells me that even if it bombs, I can still look forward to much more punishment at the movies.
Go Frank, go!

Email ThisBlogThis!Share to TwitterShare to FacebookShare to Pinterest
Labels: Marvel Comics, The Punisher

Totally agreed with your assessment Jef. Punisher is really hard to mess up and all attempts have been fairly decent. AND Ennis's run WAS amazing.

I can't wait to see what Marvel does next with him. Hopefully, no woefully watered down team-ups (remember Wolverine, Ghost-Rider, Punisher?) or other goofy cross overs. It'be cool to throw him into 'modern' times and have him do some covert operation stuff, Punisher War Journal style.

Did you know that Walter Hill and Thomas Jane pitched Punisher to Lionsgate - and they said no!

They (wrongly) chose to go with Hensleigh instead.

I had to turn the latest Punisher off after like twenty minutes.

Sure would be nice to see a 'good' adaptation, however.

What's so hard about it? You've got the character. Just send him on a clear, kick-ass trajectory and stand back to watch the fireworks.

PoT, I'm anxiously awaiting the first news on whatever Marvel is doing with the Punisher, although I bet nothing will be going on until at least next year.

A serious approach is what I'm guessing at, nothing goofy. Although I have to say I'm getting a kick out of the current "Franken-Castle" arc in the comics.

Motorcycle Boy, I did know about Lionsgate inexplicably giving Hill the cold shoulder. That's studio execs for you! That said, I really did love what Lexi Alexander did with War Zone. I found it to be a good, no-nonsense take on the Punisher (well, there was some nonsense - but really great nonsense, in my opinion). I loved the fact that they didn't even have Castle speak through the entire first reel or so!

Man I wish there was a sequel to War Zone. What a wonderfully batshit crazy action film that deserved more love.

I agree. And as much as I liked Jane as Castle, he just wouldn't have worked in War Zone. With Stevenson, you could believe he could punch someone so hard their face would completely collapse! Marvel will surely recast the role when they do their film but for my money, Stevenson was as dead-on perfect for the Punisher as Christopher Reeve was for Superman.

Despite all of the harsh criticism, I found something to like in all three representations as well, they werent perfect, but they each brought a different side of the character that was unique and interesting. Im all for any new installments they come up with. But Mark Ruffalo as The Hulk??

I don't know if any of you have seen John Travolta's The Punisher (aka Hensleigh's Director's Cut) but it is actually pretty good. I also liked it mainly because it was filmed in my home town and I never knew there was such scum there! Glad Punisher was from Tampa (represent!) in that movie.

Now, I am all for one dimensional characters (and Frank Castle is one dimensional in the good way: he stands for a philosophy and people around him either agree or disagree with him) but audiences need someone to emphathize with and Castle MOSTLY turns people off. Plus, I don't feel any of the Punisher movies provided supporting characters that saved the film. . .Jigsaw was CLOSE. . .in the end you had kind of boring villains attacking a morally ambiguous hero.

I'll be curious to see how Marvel approaches their first self-produced Punisher pic. I don't think the previous three films have been so far off from what a Punisher movie should be but yet clearly if Marvel wants this to be a success they've got to figure out what's been missing. Their best bet is to get Garth Ennis to write the screenplay but I doubt if that'll happen.