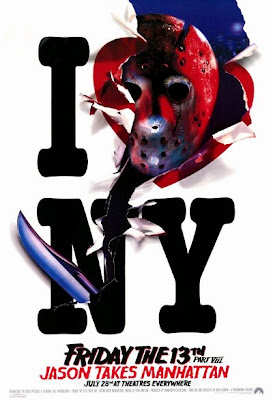 When it comes to horror franchises, I'm all about Friday the 13th. Halloween was a classic, no doubt, but as a series it was a weak player. Friday the 13th, though, they knew how to roll those movies out and the first movie hit when I was exactly the right age to be affected by it. Awed by it, really, because of the fact that I was too young to see it immediately - the same with its first two sequels (The Final Chapter was the first Friday I saw in the theaters, thanks to my mom generously consenting to take me and my best friend). But having those films be off-limits to me for a few years only made them become larger than life in my imagination. Had I been able to see the Fridays in the theaters from the start, they wouldn't have had the same mystique for me.

Like everyone else, as the '80s went on I thought the series became pretty pathetic but in looking back, nostalgia wins out. If I had to choose my least favorite of the Paramount Fridays, it'd have to be The New Blood. A lot of people love that one but while I'll give it up for the amazing look that Jason had in that film (John Carl Buechler really rocked the make-up on that - it doesn't get much better than seeing Jason's exposed spine), the ending is so atrocious that I just can't enjoy the movie. Jason Takes Manhattan has a dumb ending, too, it's just not quite as dumb as New Blood's. That's an arguable point, I know, but I'm sticking with it. Admittedly, I thought Jason Takes Manhattan was garbage back in '89 but over time, I've forgiven it for sucking.
In light of how turgid and joyless so much modern genre fare is, I give Jason Takes Manhattan points for being fun and not the least bit full of itself. It's the kind of film that could have only come from the pre-internet age. Thanks to the threat of online backlash, studios and filmmakers are way too hip now about the danger of going too far off from what the fans of a franchise expect. This doesn't stop them from making shitty movies, of course, it's just that they make them shitty within a more focused parameter. They toe the line a little more but that usually just makes for more cautious crap, not better films.

Jason Takes Manhattan comes from a time before studios thought catering to the fan base would be in their best interest and I kind of like that. Today, geeks are seen as a force to be reckoned with (Comic-Con begins tomorrow, in fact!) but the masochist in me is weirdly fond of the days when we weren't made to feel so entitled. And Jason Takes Manhattan remains the poster boy for those times.

The marketing campaign for this was so cool, it was a big part of why the movie itself was such a letdown. I wish the movie had lived up to the ads more but I still enjoy it.