The Piranha And The Damage Done 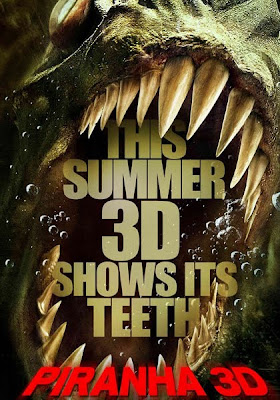 I'll tell you this: it's a topsy-turvy world we live in. I mean, who would've thought that Piranha 3-D's critical acclaim would outpace its box office appeal? But yet that hard-to-believe scenario has played out as Piranha 3-D (just Piranha according to the film's onscreen title but I'll keep refering to it as Piranha 3-D) currently sits at whopping 74% approval on Rotten Tomatoes while it looks to exit the box office Top Ten after just two weeks in theaters. Still, whatever money it's made is damn good for what amounts to a SyFy Channel Movie pimped out with 3-D. Add in the critical love, and it's all gravy.

I've been hot for this movie for ages. I mean, my first post on Piranha 3-D went up way back in May of 2008. Over two freakin' years ago! Go on, click here if you don't believe me. In my fevered anticipation, I gushed that Piranha 3-D had the potential to be "The Greatest Movie Ever." Given that, this should be my time to crow, or eat my cake, or whatever it is people do when their beliefs are vindicated. After all, I was on the Piranha 3-D bandwagon way, way before it was fashionable. The only problem I've got now is that, unlike the critical community at large, I didn't completely love the movie.

I'm not trying to be contrary - I'm not that guy who always likes to take the opposite stance on everything (honest!). And to be clear, I didn't hate the movie. I did enjoy it. I just didn't love it. This confused me at first so I saw it twice just to confirm my feelings but as it turned out my first reaction was unchanged. I thought the movie was good for a sick chuckle or two but was otherwise unimpressive. It's just too...wait for it...dumb. That statement is supposed to be greeted by shouts of "What did you expect, ass-hat?" but, please, hear me out. Piranha 3-D is a movie that tries to make every scene about boobs and blood and while that sounds like it should work, it kind of doesn't.

My five-year-old son watches a show called Sid the Science Kid and in one episode, Sid wonder why he can't just eat cake all the time, for every meal. The answer, of course, is that a diet of nothing but cake will make him sick to his stomach on top of not getting him the nutrition he needs. And that's what Piranha 3-D is like. I didn't regret the time I spent watching it but I couldn't quite celebrate it as being the Bestest Time Ever, either. On my second viewing, as I debated halfway through whether or not to skip out early and get on with more pressing concerns, I flashed on Franklin's words from The Texas Chain Saw Massacre (1974): "If I have any more fun today, I don't think I can take it!"

All bitching aside, my issues with the movie - characters that range from bland to grating, the lewd, leering treatment of women, the often murky underwater photography, the headache-inducing post-production 3-D conversion - might've been given a pass if the climactic spring break massacre had delivered as promised. This all-out feeding frenzy - as spring breakers are devoured by marauding piranha - has been reported to be the bloodiest scene in film history and while it may well be, in terms of gallons, it failed to impress this gorehound.

Call me someone who's too particular about their bloodbaths but people flailing around in red water doesn't impress me. I wanted to see some classic gore gags and on that count, I only saw two. One, where a girl's long hair gets caught in the blades of a boat motor and when the motor is started, her face is immediately torn off. And the other being when a girl is being carried out of the water by two rescuers and her body splits in two. Both of those moments boasted the kind of grisly effects-work I was hoping to see more of - gore gags where I couldn't immediately tell whether they were practical or CG. Obviously CG bits like the death of Eli Roth's wet T-shirt contest judge - as his head is crushed between two boats - or the death of two girls that are split Ghost Ship-style by a whiplashing steel cable were just too CG for my taste. CG gore can work sometimes but here, it wasn't effective.
When people say that Piranha 3-D is a perfect example of how B-movies used to be, I think that's my biggest gripe with the reception this movie's gotten. Sorry, but this isn't how B-movies used to be. The best exploitation movies were always about more than just exploitation. Certainly, the original Piranha (1978) was a smart movie that didn't treat its audience like twelve-year-old boys looking for jack-off material. Strange as it sounds, when I watched Piranha 3-D I had the vague feeling of being insulted. I give it a passing grade but I know the genre can produce much better films. I'm not going to pull a James Cameron here and throw Piranha 3-D under the bus but 3-D, 2-D, or otherwise, Piranha 3-D is mired in adolescent nonsense. It manages to make Roger Corman's sleaziest film, 1980's Humanoids from the Deep (a movie about fish-men coming out of the ocean to rape and impregnate women) look classy.
For me, George Romero's latest zombie opus, Survival of the Dead (2009), represents the kind of B-movie that I grew up on, the kind that continue to stoke my love of fantastic cinema. It's a little ragged, a little clumsy, but there's no mistaking that it has heart. This isn't cookie-cutter filmmaking. Romero is being free-wheeling, he's having fun and as he's always done, he also brings some genuine personality to the table. His socio-political concerns have been criticized as becoming too heavy-handed as he's gotten older and I don't disagree with that but when I watch Survival of the Dead, I like that I'm watching a movie made by someone who treats me as a viewer with some respect. It's not a polished production but there's a sense of soul to it. Those are the kind of genre films that keep you around for the long haul. On the other hand, movies with CG piranha fighting over severed CG penises can only sustain you for so long.
Only for about 88 minutes, in fact.
Posted by Jeff Allard at 4:45 AM

I think you, Chris and myself are the only three people in the world that enjoyed Survival of the Dead.

I echo your sentiments on Piranha. I think I'd enjoy it more if I didn't watch the Corman film for the first time two days beforehand. For all its schlock, its a smartly done film. The new flick, while a pantsload of fun, is pretty much no-brained mateiral.

That's pretty much it. I'm not going to rag on it but I can't say I found it to be that great, either. B-movies can be fun without being sub-mental but Aja and co. didn't even make an effort.

As for Survival of the Dead, it's a cool movie in my book. Glad there's a few of us out there that dig it!

I liked this even less than you did, although I'd agree it's not a total waste. The bottom line is, this was supposed to be a "fun" horror movie, and I didn't have fun with it. You hit the nail on the head with your analogy of the cake only diet. Nonstop gore and violence just gets numbing at a certain point.

Since you brought up Romero, that's a concept he understood. The beginning of 'Dawn of the Dead' was designed to numb the audience to the violence early on so the movie could get down to storytelling without the gore being a distraction. Here, it's just an end unto itself, and that's not particularly interesting to me.

Yeah, I had a sporadically good time with Piranha but overall it just had an obnoxious vibe to it that soured my experience. It was kind of like being cornered at a party by a drunk who thinks they're funny and cool.

Ive been debating on trying to sneak into theaters before it disappears, since Im sure the 2D version will not be half as fun. I just cant bring myself to pay $20 for me and the wife when Mega Piranha is still surfing around the SyFy channel weekly lol..

Yeah, that's the thing is - do you really want to spend your money on a movie that's purposely bad? I think the answer that most people would have is "no." It's true that Piranha won't be as fun in 2-D (at least I can't imagine that it would be) but you're better off saving your money for a film that's going to be worth it.

Hey there. Oh yes, I felt incredibly insulted by Piranha 3D. Seemed to me to be the kind of film that non-horror fans think horror fans enjoy... lobotomised tits-and-gore without any fun or, dammit, humanity. Lazy as hell.

Yeah, it hit the mark for some people. I just don't think it's a mark worth hitting.