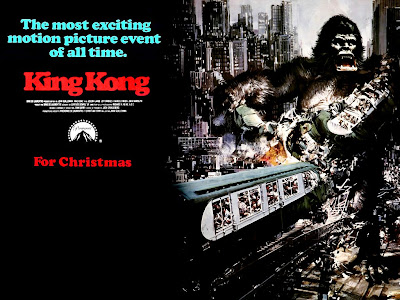 By the time the Dino De Laurentiis-produced King Kong remake was released on December 17th, 1976, I was just old enough to be hip to the importance of directors when it came to making movies. Thanks to the massive ballyhoo surrounding Kong's release, De Laurentiis was the first producer I became aware of.

Unfortunately, my disappointment with Kong caused me to forever associate De Laurentiis' name - unfairly, if fondly - with schlock. It didn't help that besides Kong, he produced much more schlock over the years - including Orca (1977), Flash Gordon (1980), and King Kong Lives (1986). It was also hard to take De Laurenttis too seriously when in interviews, many of those who worked with De Laurentiis, like Sam Raimi and Stephen King, would mercilessly - if affectionately - parody the producer's thick Italian accent. De Laurentiis himself didn't help his own cause much with proclamations like the one he made on behalf of his Kong: "When Jaws dies, nobody cries. When Kong dies, they all cry."

Before he dragged down King (with King abetting De Laurentiis every step of the way), he worked over Kong real hard. Before King Kong came out, of course, I was as wide-eyed as can be about it. Back then, the idea of a big scale fantasy/horror film was still on the novel side. Yeah, there had been enormous hits like 2001: A Space Odyssey (1968), The Exorcist (1973), Jaws (1975) and the Planet of the Apes films but genre films, by and large, were still B-movie material. They weren't the tentpole events that we take for granted today (when the summer movie seasons started to become more and more genre-orientated in the late '70s/early '80s, it was mind-blowing to me). When Peter Jackson did his remake of Kong in 2005, it was a big deal but not that big a deal. It just couldn't seem as newsworthy as the '76 version did. 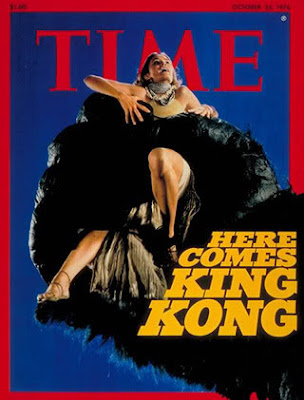 In '76, Kong was it. That was the movie I had to see. I was into all the merchandise. I had the glasses, a bad-ass cereal bowl (because nothing goes together like Corn Flakes and Kong), you name it. 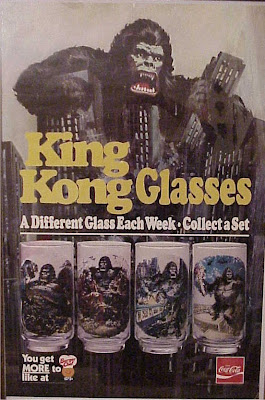 The US poster, depicting Kong straddling the World Trade Towers, hung above my bed for years, even long after I knew the movie wasn't so good. I saw King Kong in a single screen movie house located in Lancaster, New Hampshire shortly after the film had opened. I was on a family visit to my grandparents for Christmas and my mother knew there was no way I'd be able to wait a few days until we got back to Massachusetts to see Kong.

I loved that old-style movie palace (seeing movies there was always the highlight of my Lancaster visits) but my impressions of Kong weren't good. Where the original was timeless, the new version just seemed too contemporary. Given my age, I have to say I'm kind of surprised that I didn't like it. Seven-year-olds aren't real discerning viewers, and were even less so back then. But I know that I found Jessica Lange really grating and despite Rick Baker's best efforts, Kong himself just didn't look as magical as he had in the original. Outside of all that, though, the bottom line is that nothing in the movie looked quite as incredible as what the posters had promised.

I mean, I still get a smile on my face when I look at this: 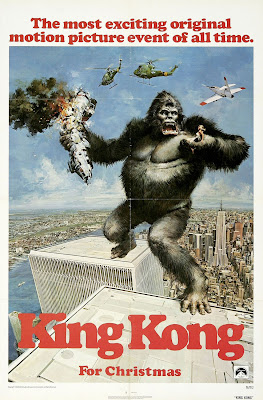 Come on, how could anyone not want to see that movie?

Films like Star Wars (1977) and Superman: The Movie (1978) came along over the next year or two and delivered in a way that Kong didn't even come close to but because Kong was the first big genre movie that I was old enough to be aware of ahead of its release and to really look forward to, I'll always have a special affection for it.

I'll tell you, when Peter Jackson did his remake of King Kong (2005) he was right to do it as a period piece - he just picked the wrong period. He shouldn't have bothered trying to bring Kong back to the '30s, where he had already been portrayed to perfection, but back to the '70s where some coolness was still left to be found. Seriously, look at the Japanese poster below, and tell me that you wouldn't have wanted Jackson to make a film that replicated this kind of imagery: 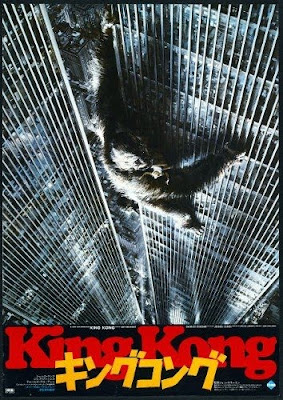 It never would've happened, of course, but I'll always maintain that would've been the better way to go. It might've only appealed to an audience of one but I promise I would've really appreciated the hell out of it! And who knows, with one of the biggest trends of the last decade being remakes of genre films of the '70s - Texas Chain Saw, The Hills Have Eyes, The Amityville Horror, Last House on the Left - maybe a remake of the '70s Kong would've actually turned out great.

Some might've considered it in poor taste to bring back the World Trade Towers just for the sake of having a giant monkey climb them - like, in really poor taste - but for others, it might've simply taken them back to a better time.

I know that's how I feel when I look back on Kong '76. It wasn't a great movie, no, but it was part of a great time. Hearing the news of De Laurentiis' passing this week at age 91 made me miss those days all over again.

That version of King Kong also drags me nostalgia as the last time I saw a movie in a BIG theater. The kind where it was a bit of a hike to go out to the lobby for popcorn.
It was also one of the first movies I remember being immediately disappointed and angry with. It prejudiced me against De Laurentiis and Jessica Lange and Jeff Bridges for a good while afterward.

Still, the guy brought me a lot of entertainment... way more good than bad.

I agree. You tend to forget - well, at least I do - just how many movies De Laurentiis produced over the years. Yeah, a lot of them were schlocky but even those have their fanbases. Hell, he produced Amityville II: The Possession and Halloween III: Season of the Witch - how cool is that? I'm surprised there's never been a book out about him but maybe now that he's passed, someone will give it a shot.

Dino made some many movies of so many kinds. Everything from some of Fellini's best to, well, 'King Kong'. He cared about making a buck, but he also cared about movies, and that's something sadly lacking in many of today's producers.

King Kong movies are one of the most interesting and exciting film among the animal related movies. Great review indeed!

You mentioned you had the Kong bowl and glasses, but how about that straw with the little Kong inside, and he rose with your drink in your straw, then DISAPPEARED into the liquid when he reached the top!

My biggest disappointment of Kong '76 as a kid was that, contrary to the awesome poster, he never did crush a space shuttle rocket with his bare hand...

Bob, I agree - you could argue over De Laurentiis' taste but not his passion.

Elgartcalago, thanks - glad you enjoyed the write-up!

FF, I share your disappointment. Nothing in the film was quite as bad-ass as the marketing made it out to be. But, that was par for the course in the '70s - at least until Star Wars hit.