Reflections In A Silver Sphere 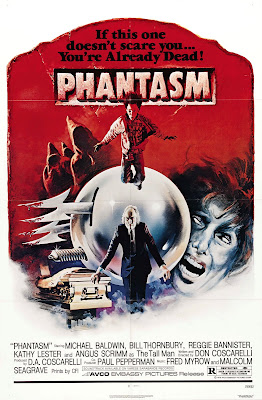 One good thing about the disappointing Super 8 is that its 1979 setting prompted me to revisit 1979's own Phantasm. You see, it just isn't the '70s unless there's some thick-ass shag carpeting and Phantasm has that covered: In his non-fiction essay on horror, Danse Macabre, Stephen King argued that not all, but surely a very large share, of horror tales could be assembled under three major archetypes: The Thing, The Vampire, and The Werewolf. A film like Alien (1979) would be an example of The Thing. Dawn of the Dead (1978), with its scenes of cannibalism and blood-drinking, has its roots in the myth of the Vampire. And the shadow of The Werewolf can be seen in a film like Psycho (1960), in that it features a character who is outwardly normal but who hides a secret self. But Phantasm? Good luck finding any antecedents or close company for The Tall Man (Angus Scrimm).

Having a mortician as the villain of a horror film isn't in itself such a radical notion. For a society like ours that lives in deep denial about death, morticians and undertakers are naturally ghoulish figures.

The mysteries surrounding their practices, and the fact that most people show an aversion to learning too much about how bodies are prepared for burial, just fuels the taboo aura surrounding their profession. But while morticians and undertakers had appeared in horror films before Phantasm (as in 1964's The Comedy of Terrors and 1966's The Undertaker And His Pals), none had featured a mortician who was also an interdimensional (or is it intergalactic?) being. 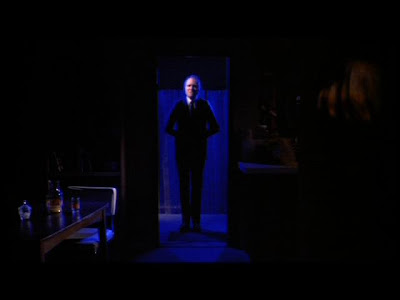 We tend to take the original Phantasm a little for granted since it's been in our collective consciousness for over thirty years and since three (mostly worthy) sequels have recycled its imagery but it's worth remembering just how surprising this movie was in 1979. I mean, prior to Phantasm, nobody ever saw anything like this: 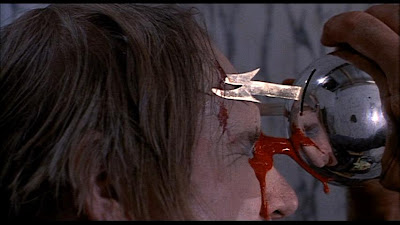 Flying silver spheres that drill into people's skulls? That was some next level shit. And just when you thought that Phantasm had played every card it could possibly have to play, Coscarelli introduced us to The Tall Man's "space gate" and this trippy movie got even trippier: 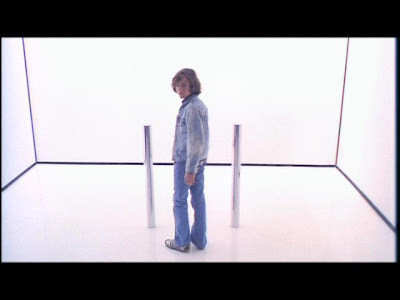 When we think of examples of sci-fi horror, we typically think of films like The Thing from Another World (1951) or Alien - films where either an alien comes to Earth or we go out to space and encounter it. Or else films in which technology runs amuck, like Demon Seed (1977). There are no other sci-fi horror film like Phantasm, though. In fact, I'm still not even sure it is sci-fi.

But with sights like this, don't you think it must be? 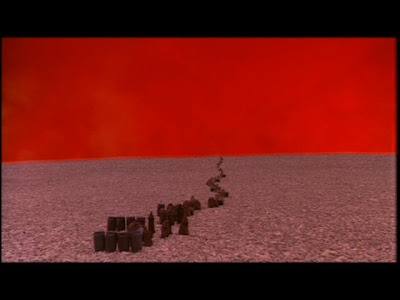 Phantasm is the only big horror hit of the '70s that has escaped a remake or a reboot and I think it's because no one beside Coscarelli is capable of navigating that universe. As fans, we know that no one can make a Texas Chainsaw movie the way that Tobe Hooper can or make a Halloween movie like John Carpenter but there's something deceptively simple on the surface of those films that allows some idiots to believe that they can but with Phantasm, I think even the densest studio exec must intuitively realize that they're out of their league. 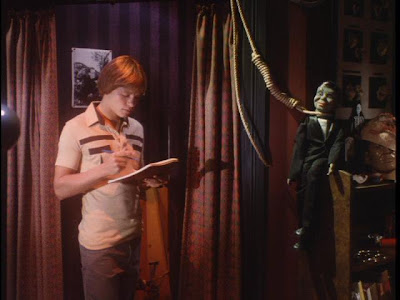 The same year as Phantasm, Tobe Hooper's adaptation of Stephen King's Salem's Lot featured a young protagonist that was strikingly similar to Phantasm's thirteen-year-old hero Mike Pearson (A. Michael Baldwin). But while Mark Petrie (Lance Kerwin) of Salem's Lot was a horror buff whose interests lent him an edge against the evil enveloping his community, Mike had no such advantage. After all, late night creature features can tell you how to kill a vampire but what's a Tall Man? 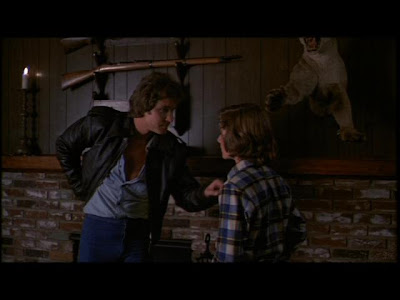 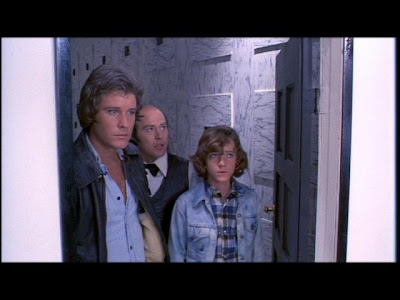 Speaking of Mike's older brother, Jody (Bill Thornbury), Wes Craven and the folks behind the Scream franchise like to claim that what makes Scream different from other horror franchises is that it continues the stories of the protagonists, rather than just bringing back the same villain in each sequel to attack a different set of victims. Well, on that count it must be said that Phantasm was there first. They might have had to recast the role of Mike for Phantasm II (1988) but the character was still there and A. Michael Baldwin returned to the Phantasm phold for III and IV. For four movies, Coscarelli made the Phantasm series as much about the camaraderie between Mike, Jody, and their ice cream-slinging buddy Reggie (Reggie Bannister) as much about the immortal evil of The Tall Man. 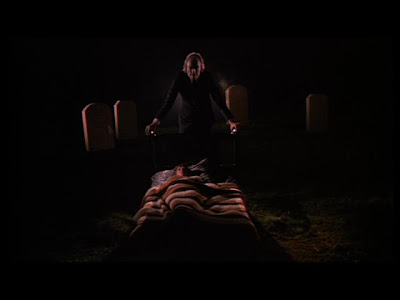 Some would also say Phantasm had the jump on another famous Craven franchise, A Nightmare on Elm Street. In the way that this movie jumps back and forth between dream and reality, Phantasm anticipated Craven's 1984 sleeper hit by five years. I say this not to take anything away from Craven's accomplishment, only to note just how ahead of the curve Coscarelli was.

Or maybe I should say, how on the ball he was.

Phantasm has such creepy dream sequences. I was not as big of a fan of the silver spheres and how fake looking the blood was, I thought it was corny. Although, I watched it for the first time only like 3 years ago or so. Having creepy music is always a big thing I look for too, and Phantasm definitely nailed that one. I think I'll have to give this one another watch soon.

I expect that Phantasm might look a little odd to newer eyes. It's definitely a funky movie and as apt to alienate as many viewers as it attracts. I think everyone would agree, though, that its soundtrack does kill.

I rewatched this film last Fall, and the sequels since, and I am just so freaking LOST as to what the hell was going on! Yeah, some parts are creepy, even scary, but the overall feeling I was left with after watching these was WHAT THE HELL???

But I think you are right about them in reference to remakes. Why would anyone try? This is totally the baby of Coscarelli and anybody else would just be playing where they don't belong.

Yeah, I think that no one else but Coscarelli can make heads or tails of Phantasm. As for how the series as a whole ties together, I would have to say it really doesn't. But that's not necessarily a knock against it. It's been a long time since I watched Oblivion, the only one that really tries to explain anything - maybe I should revisit that one again and see how it holds up.

Excellent retrospective look back at this great film. That special edition that came out a few years ago is amazing - a fantastic tribute to PHANTASM. As much as I love the first one, I prefer the second one just a bit more. A little more ambitious and I like the casting of James Le Gros even though it is often criticized among fans of the series. Plus, you've got that great weapon Reggie has of the 2 double-barreled shotguns fused together!

J.D., Phantasm II is my favorite of the bunch as well. You always have to give props to the original but II is just a kick-ass movie. I saw it in the theaters during the summer of '88 and loved it. LeGros was a good fill-in for A. Michael Baldwin and he suited the more action-orientated slant of that sequel much more than Baldwin would've.

This is such a pitch perfect love letter to one of my absolute favorite works of horror art. Good writing, Jeff!

Thanks Chris! As always, I strive for quality! Glad you liked the post!

Fantastic review of one of my all time faves! No one has ever captured the sweaty fear of a crazyass nightmare like Coscarelli and the Phantasm movies. And thank you from the bottom of my heart for calling the disappointing Super 8 disappointing.