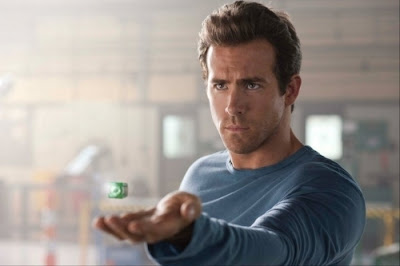 Superhero films tend to be graded on a generous curve by comics fans. Maybe a little less so now that a good number of quality adaptations have appeared but many comics fans are still accustomed to settling for less and lousy adaptations are passively accepted with comments like "well, it's just cool that they made the movie at all."

I admit, I'm guilty of that myself. The fact that they actually made a Ghost Rider film makes it hard for me to complain that it wasn't all that it could've been. In that light, maybe Green Lantern shouldn't be judged so harshly either. I've never followed the book that closely but I love the concept of GL and I'm glad that Warner Bros.' one-time plans to adapt it as a comedy vehicle for Jack Black didn't happen. But still, this version with Ryan Reynolds...it's not good.

Had Green Lantern appeared in the mid-90's, it would have looked ok next to movies like Batman Forever (1995) and Spawn (1997) but next to Spider-Man 2 (2004), Iron Man (2008), or The Dark Knight (2008) it looks pathetic. It's not nearly spectacular enough (for such a cosmic hero, the movie spends way too much time on mundane, Earth bound business), the love story is flat, and the villains are an embarrassment.

Seriously, I know that both Hector Hammond and Parallax are from the comics but maybe some rethinking was in order so that this wouldn't be a movie about a superhero matching his epic might against a guy with a hydrocephalic head and a sentient, amorphous pile of shit. Just saying. 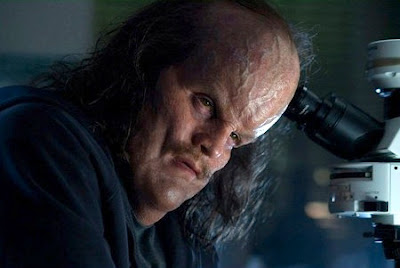 But weak villains, a lame romance, and lack of spectacle aside, my dislike of Green Lantern ultimately comes down to the fact that I did not like Reynolds as hot shot test pilot turned superhero Hal Jordan. Not because he didn't match my image of Hal from the comics but because as written and performed, the Hal as seen in Green Lantern is kind of a douchebag. To be fair, Hal has always been portrayed as someone lacking on the personal front. After all, this is a character who had to have it pointed out to him in the famous run of Green Lantern/Green Arrow by Denny O'Neil and Neal Adams that in being a star-spanning, intergalactic cop that he was often oblivious to the everyday suffering of many people on Earth, particularly minorities.

However, irregardless of that history in the comics, I'm sure that director Martin Campbell and Reynolds had every belief that the Hal they were presenting to us in Green Lantern was a likable guy. I just think they failed.

Reynolds typically plays super-confident wise-asses and I think that works as long as his character is a loser in enough other respects so that some sympathy for him can creep in. In Green Lantern, though, outside of the fact that as a young boy Hal saw his pilot dad die in a runway explosion, there's not a lot to empathize with.

If Thor was the story of a God who can only become a hero once he is punished for his arrogance, in contrast Green Lantern is the story of a man who becomes a hero by being rewarded for his arrogance. As the movie begins, Hal is shown to be a cocky jerk, indifferent to any hardships his actions might cause. Then he becomes the recipient of the most powerful weapon in the universe after which he remains essentially the same cocky jerk he was before.

The problem with Hal is best exemplified by his conflict with Hector Hammond (Peter Sarsgaard), schluby scientist turned supervillain. Hammond's exposure to the evil entity known as Parallax gave him newfound mental powers but it also transformed him from a balding, unkempt nobody into a disgusting freak with a giant melon head. What little we know about Hammond is that he wasn't a bad guy initially and even later his most destructive acts all seem rooted in his long-simmering resentments at being a laughing stock to his class of college students, being a disappointment to his politician father (Tim Robbins as US Senator Robert Hammond), and being perpetually invisible to gorgeous Carol Ferris (Blake Lively). This is a guy who's been carrying around a lot of pain for years.

Hal, on the other hand, is a guy who's always hitting the jackpot. He's incredibly handsome, a naturally gifted pilot, the object of Carol's affection (even when she's angry with him, it's usually only because she wants him to grow up and realize his true potential), and on top of all that he gets to be a full-fledged superhero! At one point, Hal removes his ring to prove to the raging Hammond just how ordinary he really is. But the thing is, when he takes off the ring and his GL costume vanishes, he's still Ryan friggin' Reynolds! It's not like finding out that underneath Spider-Man's mask is really a gawky teenage science nerd. No, underneath Green Lantern's shiny exterior is a male supermodel.

To have this guy who falls into a big bucket of win every time he turns around getting the best of someone who's only gotten the shit end of everything his whole life is not such a fine superhero tale in my eyes.

Based on Sarsgaard's subtle reactions, I have to wonder if he was the only person involved in the production who properly perceived how the deep inequities between Hammond and Hal would drive almost anyone in Hammond's shoes mad. When Hammond realizes that both he and Hal received their powers from more or less the same source but with very different results, his rueful moan speaks volumes.

After his showdown with Hammond, Hal goes on to save the people of Coast City from the living shit-storm known as Parallax so at least he isn't always making a name for himself by pushing back hard against the big-headed losers of the world but when the climatic battle of a superhero film is between the hero and a flowing mass of diarrhea, that's a major problem in itself.

As Green Lantern, Hal saves lives because that's part and parcel of the genre, but he's not any fun to root for. Reynolds has proven to be charming elsewhere but Green Lantern makes the mistake of having a Superman with no Clark Kent to balance him out (Reynolds would've fared far better as the Kyle Rayner GL, a struggling young freelance artist). As a comics fan, I would be glad that they made a movie out of Green Lantern if only they hadn't made it quite so easy for Hal to be a hero.
Posted by Jeff Allard at 2:15 PM

I think that this is the best critique I've read so far on this film. Nice references to the comic book and you've nailed the many reasons I have no desire to see this film. Well.... maybe once it shows up on HBO or something. Bring on COWBOYS & ALIENS. Man, that film can't come soon enough.

I agree, that looks great. Can't wait to check it out! The summer's far from done and there's a lot of movies I'm still excited about. GL just didn't do it for me, unfortunately. Kind you liked the write-up, J.D.!