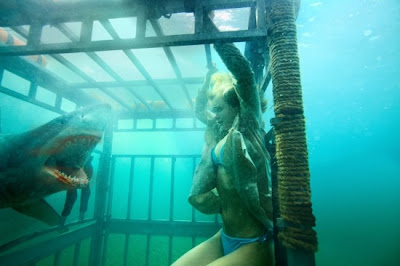 If you happen to suck I'll only blame myself for getting all worked up in advance over you. I mean, I'm old enough to know that setting one's expectations too high is a sure way to get smacked down. But really, how else was I supposed to react to a movie called Shark Night 3-D? Rationally? Please, it's just not in me to be aloof when I see those words together. Your working title of Untitled 3-D Shark Thriller was slightly less exciting but even if you stuck with that, I think I'd still be in the same boat that I am now.

Some would say that anyone really excited to see Shark Night 3-D probably has such a high, perhaps even all-compassing, threshold for garbage that their potential for experiencing disappointment is very low. Like, almost nonexistent. But I can testify that even the most willing and avid consumer of junk cinema can be let down - and more frequently than anyone might believe. But no matter how I feel when your end credits roll, Shark Night 3-D, I'm saying that I'll be responsible for my own reaction. Having said that, it would be so much easier for me to deal with my feelings if you didn't disappoint me.

I know it's too late to change anything about you now because you're, well, done and already in theaters across the country but let me just say it's my hope that you will jockey hard to be at least the third best shark-themed horror movie ever. We both know Jaws is safe. That's so forever in the #1 spot, you two might as well live on different planets but that's ok. If it makes you feel better, I already know you're going to smoke all the Jaws sequels, no question. That leaves Deep Blue Sea as your biggest competitor in the Shark Movie Hall of Fame (sorry, Monster Shark) and there's no shame in coming in behind that but let me tell you, that's not an unbeatable movie. It's no pushover but I'm smelling blood in the water, man - I think you can take it. Imagine being right behind Jaws? Well, not "right behind" - more like "from here to the moon behind" - but still #2. That could be you, my fine-finned friend. Think about that.

As for your PG-13 rating, you might think I'm sweating it like other people seem to be but I'm sanguine about it. I know that sharks are all about the biting and the tearing of limbs and all that stuff that R-ratings are about but I also know that most of my favorite Nature Attacks movies - from the classic (Jaws, duh) to the cheerfully cheesy (Grizzly, Anaconda) - are all either PG or PG-13 so I don't see that rating as being an obstacle to excellence. And, really, I think it would dickish for kids not to be able to see you on their own so I'm good with the rating - even if it means a little less torn flesh in the water and zero exposed breasts. I think even Joe Bob Briggs would be on my side in this.

Anyhow, no matter how things work out, I won't regret being so jazzed about seeing you. When it comes to being a fan, I still believe that it's best to jump in with both feet. Even when - make that especially when - sharks are involved.
Posted by Jeff Allard at 6:59 PM

Caught it last night, and you're not going to be disappointed...

Caught it Saturday night, and you're going to be disappointed...

I caught it myself and my reaction fell somewhere in the middle. Didn't love it by any means but I wasn't completely let down either.

I think I would rather watch the remains of Jaws' corpse float around in the water then this PG-13 (ahem aimed at teens at malls)rated movie.

I hear what you're saying Mummbles but I don't have an automatic gripe against PG-13 horror. A case could be made that a killer shark movie can't be less than an R but when all the Jaws films were PG or PG-13 I wouldn't be the one to make that case. And really, it should be noted that with the way the MPAA is these days this PG-13 movie is as graphic as any R-rated horror film from the late '80s.