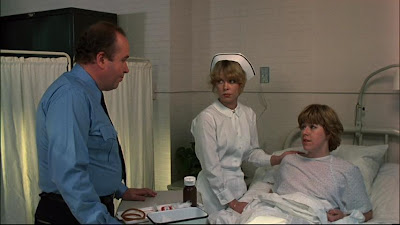 I expect that Sgt. Tierney, as fine a policeman as he may have been, never looked too deeply into Alice Hardy's mad tale of being dragged into the waters of Crystal Lake by a boy named Jason. In coping with the messy aftermath of a major crime, he wouldn't have had time to be distracted by any wild stories. Besides, Alice's account was almost secondary when the facts so clearly spoke for themselves. Right? 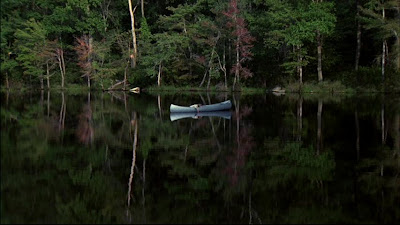 Surveying the slaughter the day after, it must've seemed like an open and shut case. Pamela Voorhees, having been unhinged since her son drowned at Camp Crystal Lake due to counselor neglect back in the summer of '57, went on a killing spree spurred by the planned reopening of the camp. But yet, as neatly explained as the events of Friday the 13th might have appeared to be, there were still a few details that ought to have raised the eyebrows of even a lawman like Officer Dorf. 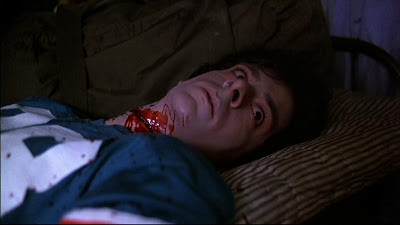 For instance, how did Mrs. Voorhees - a woman in her early '50s - manage to lift a grown man like Ned into an upper bunk without serious difficulty? 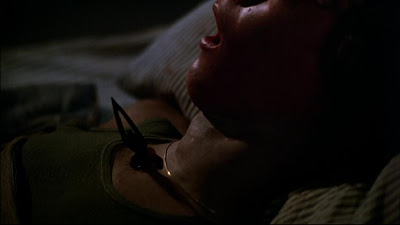 Then there's the curious manner in which Jack was killed. A lot of women Mrs. Voorhees' age have to ask for help unscrewing the lid off a jar of pickles but apparently this one is so jacked that she can drive an arrow right through both a mattress and some dude's neck. Damn! 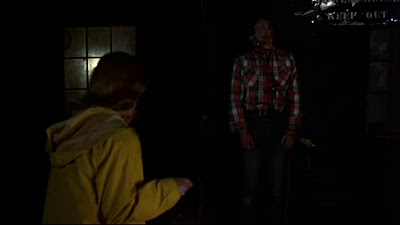 But Tierney must really had to scratch his head at the condition he found poor Bill in. In fact, I'll bet this sight single-handedly blew his mind. Not because of the awful brutality of it, but because he couldn't begin to understand how a fifty-something woman, working alone, could have possibly lifted a grown man off the ground and then impaled him to a door with arrows. That's a mystery on par with the building of the pyramids, I'd say. Definitely the kind of thing that would make a cop ask a lot of questions. 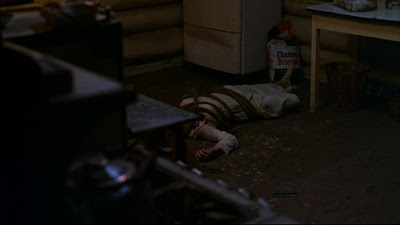 In fact, this case is nothing but questions. Like, how did Mrs. Voorhees hurl a grown woman through a window? Brenda wasn't a heavy gal by any means but we're talking at least a buck nineteen of dead weight. Try throwing that over your head through a window and see how well that works out.

Not only does Mrs. Voorhees do something with pure brute strength that ought to require the use of a plank and fulcrum... 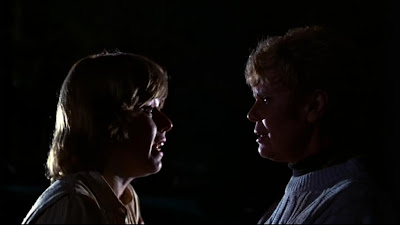 ...But after sending Brenda crashing through the window, Mrs. Voorhees is able to run back to the location of her jeep and then drive in to meet Alice and somehow not even appear winded! Had Mrs. Voorhees lived to make it to trial, there isn't a defense lawyer in America that couldn't have convinced a jury that she wasn't the killer. Or at least that she didn't have multiple accomplices. 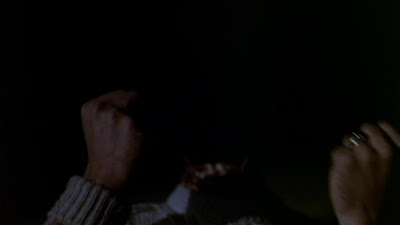 Maybe Tierney realized that nothing about that terrible night added up. But what could he do - his only living witness wasn't making sense, babbling on about a boy in the lake. As for how a girl could possibly have lopped someone's head off with a swing of a machete, well, that was just one more incredulous detail to add to the legend of Camp Blood. 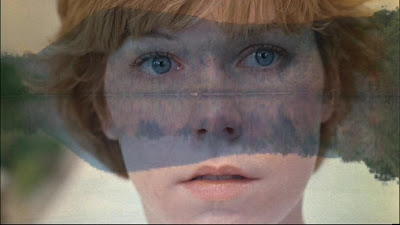 It's a story not meant for any police report, but one to be told around a campfire.
Posted by Jeff Allard at 7:14 PM

You got that right. Definitely one that would have the cops scratching their heads. But at the time, the idea of Jason having survived and living alone in the woods was even more absurd, so they had to just go with what was presented to them. As odd as it was.

Maybe they knew Pamela's history and she had been a very capable farm girl. :)

...Or they knew that you should never underestimate a mother on a misson! But I do think that the underlying absurdities of Friday the 13th are a part of its appeal, whether people consciously percieve them or not. The physical impossibility of much of what we see allows the film to not be just a grim and gritty wallow in murder but something more easily accepted as "fun."

They should have assigned Matlock to the case. I've been rewatching some of the sequels, and I really enjoy most of the franchise. Except for parts 1 and 2. Yeah, I'm weird. In my opinion, they didn't perfect the formula until The Final Chapter. Everything after that was just amusing experimentation.

PS-Check my blog. I gave you a shout-out.

Thanks for the shout-out, Dom - much appreciated! And there can never be enough CREEPSHOW love out there, that's for sure.

As for your preference for the latter Fridays, I understand. I think that unless you were around when the series started, Parts 1&2 don't hold much attraction.

Precisely. The only F13 entry that I have actual childhood memories of is Jason Goes to Hell. The rest I caught up with on VHS in my mid-teens.

I had a an entertaining time reading this blog, lots of funny and interesting stuff that cannot be rightfully explained! yet well still love it!

Ha! Great post. Whoever currently holds the rights to the franchise should pay you to write a novel through the eyes of Sgt. Tierney that works out all of the inconsistencies.

Jonny, my guess is that poor Tierney eventually went mad by trying (and failing) to cope with the lack of logical explanations in this case!

I can't believe what I read; I not agree, sorry... A parent of mine works in a mental hospital and told me that one of the first things they learn is that mad persons have a brutal strenght, and Pamela was a psicotic woman. The screen writer of original F13 knew what is doing.