If You Want Blood, You've Got It 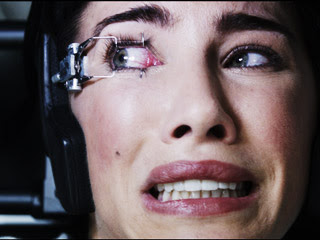 Much like the Friday the 13th franchise during its '80s heyday, the Final Destination films are body count pictures sold on the appeal of their spectacular splatter FX. But unlike the MPAA-embattled Fridays, the FD films have never been forced to water down their main asset. With the standards of the MPAA being so much looser now, the makers of the FD films appear to have carte blanche when it comes to carnage as this fifth installment is a riot of hideous gore gags that rival anything the series has produced so far.

As far as Final Destination 5's storyline goes, if you've ever seen a single FD movie, you already know the drill: a group of people are saved from perishing in a cataclysmic accident thanks to an unexplained psychic vision. Soon afterwards, one by one each survivor meets a violent end in what appears to be freak mishaps. In FD 5, we begin with a group of co-workers from a paper factory riding together on a charter bus en route to a corporate retreat.

Sam (Nicholas D'Agosto) - an employee of Presage Paper and an aspiring chef - is the one who sees a horrific vision of mass death as their bus idles in traffic on a suspension bridge under construction and promptly causes his fellow workers to evacuate the bus and the bridge. Sam's vision of the bridge collapse is a masterfully executed disaster, the best FD opener since FD 2.

Director Steven Quale, an associate of James Cameron since the days of The Abyss who recently worked as second unit director and visual effects supervisor on Avatar, proves himself to be a perfect match for FD 5's elaborate mayhem and 3-D thrills.

I used to feel gypped that I had been too young in the early '80s to see the wave of 3-D horror films that hit screens back then but the last few years of 3-D releases has more than made up for it. While last summer's Piranha suffered from a poor post-conversion job, Final Destination 5 is a reminder of how much fun a 3-D horror film can be - as long as your idea of fun is watching someone impaled on a ship's mast, that is.

Writer Eric Heisserer (of the upcoming Thing prequel) gives Quale plenty of grisly material to work with. His screenplay may not win any awards - unless Fangoria's Chainsaw Awards includes a Best Screenplay category, maybe - but it triumphs over most of the series' entries by not stalling out after the opening disaster. Heisserer adds an interesting new wrinkle to the series' mythology by suggesting that if a person marked for death takes a life, then they inherit their victim's remaining lifespan. But of course, no matter what loopholes they try to find in death's design, longevity is not in the cards for most of FD 5's characters.

The actors here - including David Koechner and Courtney B. Vance - are all serviceable but the star of any FD film are its flabbergasting fatalities and FD 5 does not disappoint as every doomed character gets it in hardcore fashion (I'm still cringing over the gymnastics scene). One could carp about the lack of a compelling plotline but chances are anyone who would care about that wouldn't be watching the fifth Final Destination movie. If you've stuck with the series this far, I think you ought to know what you're in for.

Even if this is the best sequel in the series by some measure, it's still a Final Destination film. That means that, in the end, it's all about the death toll and for those who enjoy such things, Final Destination 5 represents state-of-the-art slaughter at its finest.

I have only seen the first one, and I just remember I did not like that people were dying just because they were suppose to. In a slasher movie you have some fast kills but overall the killer has to think of some weird or fun way to kill a teenager. In FD1 they were just hitting kids with buses just so they would die, I look for a tad more in a kill. I have heard they have crazy kills and even though I do not like the movies I could see why others do. Maybe one day I will have to revisit them all but for now I will skip this one like I have the others.

That sounds like a sensible plan, Mummbles! If you haven't been keeping up with the series, Part 5 might not be the best place to jump back in.

I dunno. The series lost me after it disposed of the lovely Ali Larter. The first two are the best in terms of quality but now it seems like each subsequent sequel is merely an exercise in topping the previous one in terms of gory, insanely executed death scenes, which, I suppose, is the point of the entire franchise.

Yeah, I think that's what it comes down to. Either you appreciate the series on its own terms or you don't. Personally I admire the simplicity of the concept and that the producers haven't been tempted to muck it up as the series has continued. As someone who sees the potential for disaster everywhere, and is phobic about doing anything that might put me in even the most remote of harm's way, I'm an especially easy mark for the FD films.