The Savage Sword Of Conan 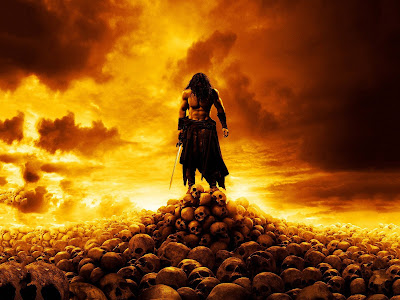 As Robert E. Howard's sword-slinging Cimmerian is a man of few words, I'll keep my comments on this latest cinematic incarnation of Conan the Barbarian short. Basically, I got a big kick out of it. It's not all that good by any objective standards but as a blood-soaked, barbaric romp, it entertained me. Now, I should say that I've never read Howard's stories. If I had, I'd probably feel a lot more affronted by how cheesy the new Conan is. But I haven't, so there you go.

Conan director Marcus Nispel has made something a name for himself by helming remakes of fan favorite properties like Texas Chain Saw Massacre and Friday the 13th. He hasn't made a good name for himself by doing this, but he has made a name. I would say this is better than his other films but maybe that's just because I'm less invested in the world of Conan so whatever atrocities he may have committed against the character, they aren't ones I'm likely to notice or be bothered by. You know, like that whole having Jason living in a series of underground tunnels thing in the Friday the 13th remake. That sure got my attention. Jesus, what the hell was going on there?

Anyhow, even without my whole not knowing anything about Conan thing, it's pretty clear that Nispel's Conan isn't much more than a celebration of brutality but as the word "Barbarian" is right there in the title, I can't call chicanery. This is one of those movies where you're either on its side from the first scene or you're immediately ready to walk out. Its opening is one of the most outrageous I can think of in recent - or even in way fucking back - memory. When a movie begins with a baby floating peacefully in the safety of its mother's womb only to have the womb pierced by a sword and then reveal that the mother is on the field of battle, having just been fatally wounded by an enemy, you can consider my attention gotten.

As Conan hacks and slashes his way through various enemies throughout the course of the film - some of them supernatural, some not - my interest held steady. It might be a slog to some but I've sat through truly tedious examples of this sub-genre over the years and this new Conan isn't one of them. Go on, watch Yor: Hunter from the Future or Steel Dawn if you want to try your luck.

Conan the Barbarian is the kind of movie they don't make anymore and, based on its stillborn performance at the box office, they will continue not to make them. But that's ok. They made this one, I got to see it in theaters (in 2-D, thankfully), and that's enough to make me happy. I do kind of feel bad for star Jason Momoa, though, that this movie tanked as hard as it did as he makes for a good Conan.

At this point I've kind of already said more that I planned to so I'm gonna wrap things up here. You know, after praising this movie - which is far from the first movie of questionable quality that I've raved about - I've gotta wonder if I'm just too supportive of crap and if people just automatically roll their eyes or shake their heads sadly whenever I say I liked a movie like this. If so, I can't blame them. I always like to go with my gut first when it comes to judging how I feel about movies and, as the line goes, I've come to the conclusion that my gut has shit for brains.

Then again, I have been quick to call out nonsense like Skyline so I shouldn't be too hard on myself. Second-guessing your opinions is a waste of time. By Crom, it's the kind of sissy move you'd never catch Conan doing.
Posted by Jeff Allard at 5:48 PM

I didn't like this flick, nor did I hate it. It's an ok sword and sorcery movie, but it doesn't hold a candle to the Schwarzenegger version (which also played fast and loose with the source material). I wanted to have fun with this movie, and I did up to a point, but in the end I'd rather watch'Deathstalker' again.

I read the REH stories when a kid and now I'm reading the unexpurgated versions....REH was a great story-teller, part of the genius of the Hyborian Age was that it included aspects of recognizable historical periods, so we could readily identify it while being transported to an age with its own mythology, history, geopolitics, etc. I would say it is better done than Tolkien, whose writing is a bit twee by comparison.

Here's the thing, though, REH had a personal philosophy that he imbues Conan with, I guess you would call it a brooding Stoic philosophy. I think the genius of the Milius version is that he got the Hyborian Age, and he got the brooding nihilism.

Film-makers, or their financiers, are too dumb to do Conan justice. But perhaps the success of Game of Thrones will someday enable someone to do a miniseries that properly honors the original character. I'm more interested in getting the character and time right, than veracity to the actual stories. What we need is a director who appreciates REH's stories, the way Jackson appreciated LotR. What we got this time was a hack, sadly.

Bob, I don't know if I'll ever be revisiting this Conan but having gone in expecting a sanitized SyFy-type film, I was happily surprised that this was - if nothing else - an all-out, pulp-style bloodbath.

Dr. Forbin, one of these days I'll have to catch up with the original Howard stories. And who knows, maybe a director with enough clout will be in a position one day to bring Howard's work to the screen the right way.