Nothing Stops This Undead Super-Killer 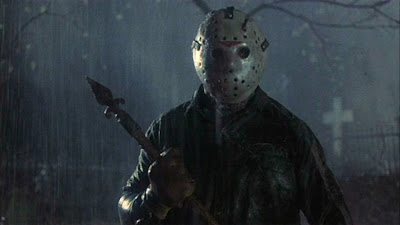 By the summer of '86, everyone knew what to expect from a Friday the 13th movie. Since 1980, the Friday the 13th films had been an annual event and - as critics were quick to note - each one had been virtually identical to the last. Despite the curve ball that 1985's Part V had thrown by having Jason Voorhees replaced by a copycat killer, all five Fridays had served up similar slasher shenanigans - each one made with the same blunt, no-nonsense approach, with any artistry reserved for their make-up FX. Given the history of the franchise, no one expected much in the way of surprises from the sixth film but in August of '86, writer/director Tom McLaughlin showed what a little extra effort could accomplish within the Friday formula. 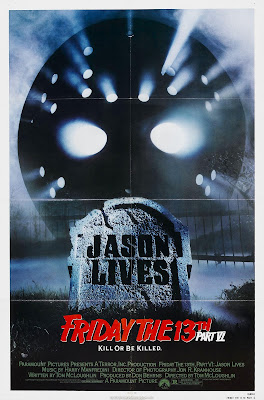 Prior to this film, Jason had been something of a mystery. Introduced via flashback in the original Friday as a mongoloid child with buoyancy issues, his appearance at the end of that film as a moss covered avenger dragging Final Girl Alice into the waters of Crystal Lake was only meant to be a dream. But by 1981's Part 2, reports of Jason's death were shown to be greatly exaggerated. His curious upgrade from dead child to living adult never received much in the way of explanation but the impression given in the early Friday sequels was that however it was possible that Jason was up and about, he was still just a really tough dude - nearly impossible to kill but still mortal. 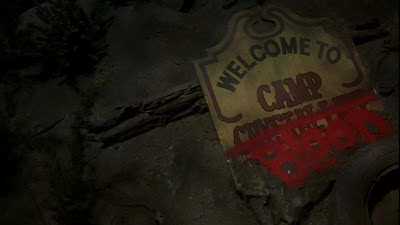 When Jason was slain in 1984's The Final Chapter, it seemed like an affirmation that he really was only human after all. He went down pretty decisively thanks to a machete to the head (among other grievous injuries - the machete was just kind of like that one last piece that brings the Jenga tower down) and stayed dead in A New Beginning. But Jason fans weren't having it with any copycats so the keepers of the franchise were forced to put their star slasher on the road to recovery. With Jason Lives, any further ambiguity about Jason was put to an end. From then on, Jason was no longer either some backwoods hillbilly with a knack for ignoring pain or an undead thing coughed up from Hell. Instead, he officially became a zombie. 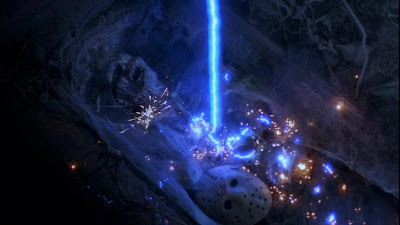 McLoughlin opened his film with Jason's spectacular resurrection as Tommy (Thom Mathews), Jason's killer in The Final Chapter, refuses to leave well enough alone and digs up Jason's body, stabs it in the chest with an iron fence post, and then watches agape as a bolt of lightening strikes the post, sending a surge of electricity through Jason that revives his rotting corpse. Then, it's Game On. 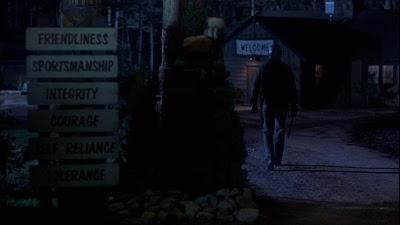 Before Jason Lives, the series hadn't exactly been Henry: Portrait of a Serial Killer but it wasn't too zany either. Like, no one would've ever thought about having Jason doing far-out things like battle a telekinetic teen or go into space. But after Jason Lives, that stuff didn't seem like such a stretch. Despite the familiar ingredients he was working with, McLoughlin made a monster movie rather than a slasher pic and after that, the latter Friday films inevitably became much more comic book. That's something that exasperated me at the time but now I'm pretty fond of even Jason Takes Manhattan.

Life's too short to hold grudges, I say. 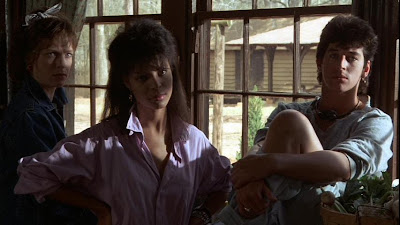 I'm still not that taken with the nudge-nudge style of humor found here but McLoughlin did score an impressive cast of performers who were skilled across the board rather than the hit-or-miss groups that had populated the previous films - and he showed a real eye for atmospherics. This is the first Friday that didn't look cheap, the first where some thought clearly went into the visuals beyond considering the best angle to shoot the FX. Something else that McLoughlin should be commended for is how he kept his storyline moving in a way that previous Fridays didn't. By having Tommy spend the movie breathlessly pursuing Jason all while fighting the pissed off local law who are convinced he's nuts, there's a relentless pace here that the other Fridays didn't have. There's no time for any Strip Monopoly games or idle guitar strumming in Jason Lives, I'll tell you that. 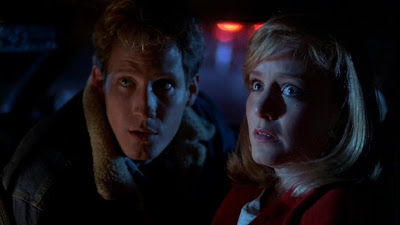 McLoughlin's film, with its more mainstream sensibilities (this is dangerously close to being family-friendly), pointed the way towards a potentially more upscale future for the Friday series but no one helming a subsequent Friday pic ever ran with that. They did, however, continue the monster movie angle (Jason was once again revived by electricity in Part VIII) and embraced the opportunity to incorporate more fantastical elements. Jason Lives did it best, though, and twenty-five years later it remains the last real highpoint of the series and a great memory of the summer of '86. 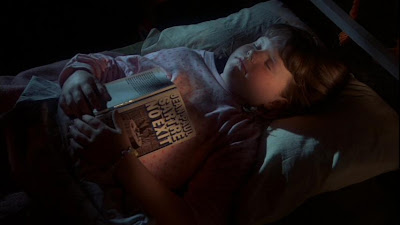 Great review! It is really one of my favorite Jason films, has just so much to enjoy. I try not to over-think things when watching these movies, instead just letting go and enjoying the ride.

Tell me about it! It doesn't seem possible that JASON LIVES is that old but time flies, apparently.

Excellent review! You really build a convincing argument for the validity of this film. Too often, the FRIDAY THE 13TH films are easily dismissed but if you can get into them they are interesting to watch, esp. how the franchise evolved over time. And I know how you feel re: JASON TAKES MANHATTAN. I'd take it over any of the increasingly tiresome SAW sequels.

PSSt! Just FYI, I know a guy with a Down's Syndrome child, and he takes exception to the term "mongoloid". Apparently it's offensive. I'm sure you didn't mean any offense or insult. Fun article!

J.D., the years have not turned JASON TAKES MANHATTAN into a good movie but, like you, I'd still go for it over a lot of modern genre offerings.

Aaron, no offense meant but thank you for pointing that out.

This was the first 'Friday' I saw in a theater, so I'll always have a place in my heart for it. To this day the main thing I remember about the resurrection scene is that Ron "Horseshack" Palillo is in it.

I saw every Friday in the theater through Freddy vs Jason, and Jason Lives stands out as one of my faves. Sure, as a director in the franchise you may be offing a busload of teens across 90 minutes, but as Tommy McL shows, there's no reason to be so dour about it! Look at what you get with this movie - Horshack; a quick 007 spoof; Vinnie Guastaferro's hilarious accent and "Happy Friday de Terteent!" the first major vehicle stunt in the series; Kerry Noonan (*sigh!*); the director's wife offering Jason her credit card; one of the hottest of Frank Mancuso's mandated "Leading Blondes"; and someone calling Jason "maggothead!" What more could anyone ask?

Bob, seeing JASON LIVES in the theater was definitely a memorable experience for me. Before the movie began, the entire theater started chanting "Jason! Jason! Jason!" I think this was the movie that really cemented Jason "rock star" status with fans.

Craig, speaking of leading lady Jennifer Cooke - as much as I crushed on Adrienne King and Amy Steel back in the day, I've got to say that Cooke might be the most stunning Friday female of them all.

Jeff, funny thing you mentioned Jason being like a "rock star" in your last comment: My friends and I all agreed that the scene of Jason standing atop the flipped RV with fire coming out of it would have made an awesome metal album cover.