Get Your Ape On! 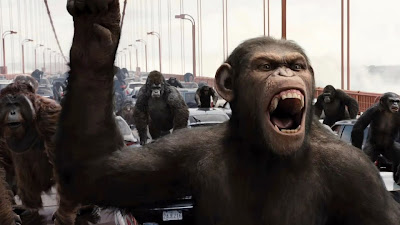 While watching Rise of the Planet of Apes, besides being thrilled by the fact that the Apes franchise had been revisited with such intelligence and style, I had to flashback to an old review of E.T. by cartoonist Gahan Wilson that appeared in Twilight Zone magazine. In his review, Wilson observed that movies used to be sold on the appeal of their stars - silver screen icons like John Wayne or Clark Gable. Or, for genre fans, someone like Boris Karloff. But, as Wilson wrote, "stars are being replaced by a newer, better product: the non-human lead, or, as I like to think of it, the NHL."

Wilson marked E.T. as the film that would pave the way for more actors to be marginalized by non-human stars. Imagining the '80s to be the golden age of NHLs, Wilson cast his thoughts wryly into the future: "As we all grow older and nostalgic we may look back...with wrinkly smiles and quaver, one old fool to another: "Oh, they knew how to make NHLs back then, you bet - the real thing, the McCoy. Not like the crap you get these days."

Well, flash forward almost thirty years and the NHL is still thriving. In fact, it may soon be collecting an Oscar. Now, I know that a gifted actor - Andy Serkis, who has cornered the market on motion-capture performances - is behind Rise's lead chimp, Caesar, but hey, E.T. was voiced by Debra Winger so I'm still counting Caesar as an NHL. He isn't a puppet but certainly it's the combination of Serkis' performance and the technicians at WETA that brought Caesar to life just as much as it was Winger's voice coupled with the animatronic work of Carlo Rambaldi and his crew that made E.T. into a fully believable character.

In 1968, the original Planet of the Apes was a FX groundbreaker due to the astonishing prosthetic make-ups designed by John Chambers. At the time that film was a major gamble, relying on its convincing make-ups to keep audiences from finding the film unintentionally comical. Given that, it's only fitting that this prequel/reboot should be such a FX marvel as well. I don't know if the Oscar buzz around Serkis' performance will lead to anything but his work here (and the technology abetting it) is worthy of the highest accolades (as a side note, if anyone has issues with the CGI in this movie, they're nuts).

Director Rupert Wyatt and writers Rick Jaffa and Amanda Silver have crafted one of the better sci-fi fables of recent years. Rise could've been a heavy-handed slog, beating the audience over the head with depictions of animal cruelty and stacking the deck in the apes' favor but it's not as pedantic as that. While humans do engage in more than their share of bad behavior, they're not all villains and even Caesar is shown to be not entirely noble.

Playing out as sci-fi tinged drama for most of its running time, Rise's climax is an eye-popping simian showdown as police try to quell the ape uprising. Not only are the FX impressive but it's equally impressive that as a director Wyatt is able to put an action scene on screen that has such cinematic clarity. The trailers and TV spots have given away a good chunk of this section of the movie but it's still thrilling to watch it unfold in its entirety.

Unfortunately, it must be said that most of Rise's human performances come up short. James Franco seems under sedation as scientist Will Rodman. And the performance of Freido Pinto as Franco's love interest is notable for being one of the blandest I've seen in any film. The often times listless acting in Rise isn't enough to completely undermine it, though, and John Lithgow fares well as Franco's Alzheimer’s stricken father.

Rise can't claim to have the knock-you-on-your-ass power of the original POTA but judged on its own merits, Rise is damn effective, with Serkis' performance towering above everything else.

I also liked how the niggling question of how apes could form a serious threat to humanity was handled. Sometimes dominance is a matter of being the right species at the right time. I just hope that this does well enough to warrant a sequel as the prospect of a follow-up done with the same amount of care is very ape-ppealing.
Posted by Jeff Allard at 4:35 PM

Email ThisBlogThis!Share to TwitterShare to FacebookShare to Pinterest
Labels: Andy Serkis, James Franco, Rise of the Planet of the Apes, Rupert Wyatt

I agree with most of your review and found this to be a very well done movie. I thought the previews sold it short but also didn't reveal too much (besides the Golden Gate Bridge show down). This movie has made me want to go and see the original Planet of The Apes now!

If you've never seen the original, Mummbles, don't hesitate to check it out!

I just got back from seeing this... excellent stuff! Probably the best time I've had at a movie in quite a while.
The pacing/progression of events was done in such a convincing way... this leads to that leads to THIS.
Lots of clever bits for the observant but not an overdose of crowd-pleasing corn.
I definitely left hoping for a followup.

I also had the notion that the spate of chimp attacks in (relatively recent) past years helped to sell a lot of it. There were some scenes that... shown to an audience in the 50's would have looked like a comedy... but nowadays we're quite aware that chimps can rip off your face (and other bits) with their bare hands.