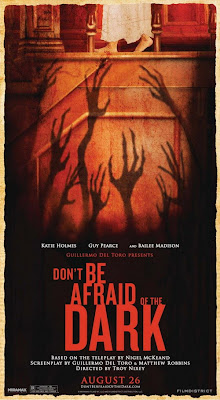 Unless you were a kid in the '70s, Don't Be Afraid of the Dark is probably a title you're unfamiliar with. And if you did happen to catch up with this 1973 TV movie along the way on VHS or DVD, chances are it didn't resonate with you the way it still does for many Gen-Xers. It's a cult film but hardly a classic. Even those who were given sleepless nights by it as children would be hard-pressed to say that it remains frightening today.

As one of Don't Be Afraid of the Dark's original audience, producer Guillermo del Toro does a fine job of retooling this now-hokey childhood traumatizer into a film that ably works for an audience of 2011 while still retaining enough of the '73 version for fans to recognize. This being the first feature of director Troy Nixey, his contribution to Don't Be Afraid of the Dark is inevitably going to be somewhat overshadowed by the presence of del Toro on the project - especially as this film boasts so many trademark del Toro touches from its story elements to its production design (del Toro wrote the screenplay along with frequent writing partner Matthew Robbins). It will take further films from Nixey to really determine what kind of filmmaker he is but this is unarguably a finely directed film and based on its smooth execution, it seems that the producer/director relationship behind it was an artistically harmonious one.

A key change in this remake from the original is that, unlike the '73 Dark which featured a lonely and neglected housewife (Kim Darby) as the protagonist, here the heroine is a young girl named (after Darby's character) Sally (Bailee Madison). As the movie opens, Sally has just been figuratively dumped on her father's doorstep by her mother. In this case, her father's doorstep is Blackwood Manor, a gloomy piece of Rhode Island real estate that Sally's architect dad (Guy Pearce) is in the midst of restoring with the assist of his new interior decorator girlfriend Kim (Katie Holmes).

Sally is miserable in her new surroundings and with her new semi-step mom figure. But then she discovers a long-shuttered basement to Blackwood Manor from which Sally can hear strange whispers, promising friendship. But viewers of the original - as well as anyone who takes in the grisly prologue to this film, for that matter - know that whatever is calling out to Sally only intends to bring her harm.

It was wise of del Toro and Robbins to switch to a child protagonist as Darby's Sally seems like a relic of another time, when (sadly) it wasn't so jarring to see a grown woman be so unable to help herself. To try and retell that character's story for today's audiences would've been disastrous. And while the idea of a kid protagonist can be cause for concern, with expectations of a cloying or obnoxiously precocious character, Madison thankfully doesn't play one of those typical movie kids who seems too advanced for their years. As for Pearce and Holmes, while neither is playing the most vivid of characters, they're both fine in their roles.

In changing the central characters of Don't Be Afraid of the Dark from a young married couple to an ill-fit family unit, del Toro and Robbins still left the basic bones of the original storyline intact and that means that this remains a very simple tale - perhaps too simple for some, given the pedigree behind it. Del Toro's name on a film automatically raises critical expectations and Don't Be Afraid of the Dark may be too modest of a production to please those who go in looking for something along the lines of Pan's Labyrinth. Staying true to the spirit of the original, this is meant as a straight-forward spine-tingler and for those who aren't necessarily genre fans, that might not be enough. For myself, I loved that this was just about crafting a small, solid genre piece. It's not out to rewrite the book or bust any conventions and it doesn't try to be an FX extravaganza.

From the previews, I was worried about the creature's look. I expected to be turned off by the CGI but unless I'm forgetting some other film (or films), this might be the first case in which wholly CGI monsters are pulled off effectively (as opposed to, say, Jurassic Park or Starship Troopers where CGI was combined with other methods).

If it's not the first, it's definitely the first in a while. After seeing so many contemporary monster movies, like Super 8, being let down by disappointingly designed, lazily rendered, instantly forgettable CGI creatures, I was thrilled to see how well the tiny homunculi were realized here. Nixey keeps them in the shadows for the most part but when they need to be revealed, there's as much detail to them as if they'd been sculpted by hand. And they're able to express real emotion as well, with some of their reactions being among the most memorable shots in the film.

There are a few points to quibble with - the relationship between the gruff handyman (Jack Thompson) and the creatures is only vaguely explained and even seemingly impossible, given the length of time the creatures have been sealed off for. And for such malicious creatures, it's curious that they refrain from killing at times where they have ample opportunity, conveniently leaving fallen characters a chance to recover.

I also must've missed out on why Holmes' character has a vintage Polaroid instant camera. At first I thought it was because the story was set in the '70s but cellphones abound so that explanation is out.

The easiest reasoning is that it's a nod to the original in which Darby's Sally used flashbulbs at one point to ward off the creatures (at least I seem to remember that she did) and, in the end, I like that del Toro and Nixey inject this anachronistic tech into their modern movie with no excuse given. In fact, no one even comments on it - although even a young kid in our digital age would remark on what a strange sight it is. The camera is there simply because del Toro and Nixey wanted it to be there. As fans, they understand that in a horror movie, anything to set the proper mood comes before logic.

Mood is something Don't Be Afraid of the Dark has in spades. The production design of Roger Ford is outstanding and even when nothing "big" is going on - which, honestly, is for most of the movie - it's a pleasure to soak in the marvelous sets and autumnal locations (this was filmed in Melbourne, Australia - which does a mostly good job of subbing for New England). For many, this will be an easy film to shrug off but I appreciated the skill behind this minor, but lovingly made, effort.

Nice review. I am curious to see that if only because of Del Toro's name attached to it. The trailers certainly hint at a look and feel right out of one of his films. I have never seen the original but it is now out on DVD so I have no excuse...

Well, I wouldn't go out of your way to check it out. I might be wrong but I have a feeling that unless you have a nostalgic connection to it, the original DBAOTD isn't all that great. For a TV movie from '73, it's damn solid but it's still a TV movie from '73. I don't know...it's been awhile since I watched it and the last time was on a washed out VHS dub so maybe on DVD it's a little more impressive. As for the new movie, I stand by it but I get the feeling that I'm one of the few who really dug it.

I've never seen the original, so I hold no nostalgic feelings that would affect a viewing of the remake, or even my desire to see it. I've yet to see the new film, but of course, having Del Toro's name attached was enough to get me interested.

He has a good track record as a producer with films like The Orphanage, the flawed but still totally fun Splice and one of the decade's best with Biutiful. So I certainly feel I can trust the man.

Glad to read you liked this one, Jeff. I haven't read any other reviews, so I have no clue what others are saying about it, though, I tend to take the general consensus of a film with a grain of salt.

...And you should definitely take my opinion with a grain of salt! But yeah, del Toro has good quality control as a producer and DBAOTD is no exception. I just think that, in being true to the source, that it isn't balls-out enough for a lot of horror fans (the inexplicable R-rating didn't help with that) and it's too much of a B-movie to charm most critics. Entertainment Weekly's review said that the material was played "depressingly straight" but that's what I liked about it.

I strongly disagree with a lot of your thoughts. The movie starts out well enough and it did have some good early atmosphere to it. The entire movie seemed to lose it for me once the terrible looking cgi monster is revealed. I just thought the creatures really would pose no threat, and basically don't until the finale. The way they talk is more comical then scary, and sorry the dinner scene?? They were ok to be out in the light then but not the rest of the movie? Anyway the movie is not a total loss but I think you enjoyed much more then me and 2 other people I went to see it with.

Mummbles, it sounds like I did enjoy it more. I agree that there are many lapses in logic but for me this movie was about mood first and logic second but I understand your complaints. I can't argue that this was a great movie by any means. All I can say is that I liked it for what it was.