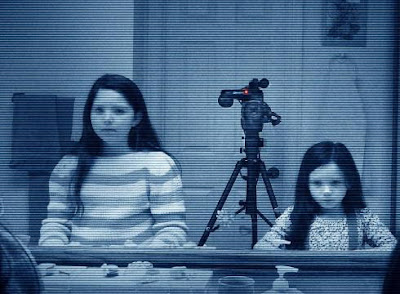 Back in September, I wrote about how I felt the Paranormal Activity films were a good thing for the genre, with their reliance on old-school, gore-free scares, and now having seen the third film in the series, those opinions still hold - even if the early hints of franchise fatigue are starting to appear. To be fair, a lot of people feel that PA 3 is an improvement over PA 2 but I'd say the two are about about even, with PA 2 having a slight edge in some ways. I liked the bitter twist that PA 2 offered, putting the events of the first film in a cruel context of familial betrayal. PA 3 gives us even more sinister backstory information but it doesn't have quite the same kick as the revelations found in PA 2. What we discover in PA 3 seems more like a standard horror movie villain reveal, a little old hat.

As with any long-running horror series, the PA films are starting to feel ham-strung by their own mythology. Some franchise fans - of whatever franchise it may be - thrive off of that kind of stuff but it always brings a series to its tipping point, in my opinion. You know, the first Halloween was so terrifying because it was a scenario that you felt could happen to you or to anyone else but the sequels only served to dilute that. Even sharks, the most random predators of all, had to be given a personal agenda in the Jaws sequels, pursuing the Brody family to Jamaica or where ever. PA isn't off the rails yet but the ghostly handwriting is starting to appear on the walls.

For the bulk of PA 3, directors Ariel Schulman and Henry Joost hit every beat perfectly, nailing every scare and ramping up the tension to a crescendo, but PA 3's final moments could've benefited from an additional moment - one more scare, another line of dialogue.

You can feel the different vibe in a theater between an audience that's waiting for a little more from a film and when they go out on a high note and PA 3 is more the former than the latter. That said, I thought the scares in PA 3 were generally more inventive than those of its two predecessors.

Part of the fun of the PA movies is seeing how the filmmakers use their ingenuity to pull off jumps scares and FX shots while making such moments appear as invisible of artifice as possible and in PA 3, Schulman and Joost, under the guidance of PA mastermind Oren Peli, deliver some of the most satisfying scares of the series - some of them loud, some of them elegant (a quiet moment involving a sheet being my favorite). I continue to find it interesting that Peli doesn't do any kind of sucking up to the horror press, he doesn't sell himself as a hardcore genre aficionado and create a following for himself, but yet he clearly has a better handle on what makes horror films work than "fan-friendly" directors who always say the right things in interviews and nostalgically pine for a return to the good old days of the '70s and '80s but whose films never quite deliver.

Whether you're a fan of the PA films or not, the success of this latest entry is a heartening reminder that, yes, audiences still want to see horror movies. Even if a horror movie looks awful, I'll still see it but for the average person who doesn't live and breathe this stuff and who isn't able to convince themselves that, hey, there really is a good chance that The Rite won't be atrocious, it's about waiting for the right movie to come along. As someone who doesn't pick and choose, someone who just automatically shows up on opening day for any horror movie, it's always interesting for me to see what brings everyone else into the theater. At the end of the day, the answer is always as simple as "something scary." There's an obvious reason why a movie like the Fright Night remake failed and why a movie like PA 3 succeeds. Or why The Blair Witch Project was a hit and The Haunting remake wasn't. Sometimes a really scary movie will still flop but more often than not, if a movie works, word gets out.

The only downside to the success of the PA films is that studios might take it as a sign that audiences only want "found-footage" horror but that's an avoidable side effect of any successful film - a market flooded with copycats - but hopefully the success of PA 3 will help more horror films of every type make it to theaters. The real lesson to be learned is that - in or out of October - scary movies are always in season if they're done right.
Posted by Jeff Allard at 7:30 PM

I just recently watched PA2 and found it boring and times but ultimaly I enjoyed it, mostly for the way it tied into the first film so well. I did enjoy the ending especially well. I think these movies could do with more scares or gore. I feel sorry for the people who see these and believe they are real, ah the youth of today. Super 8 for life!

That's the spirit - keep flying the flag for Super 8, Mummbles! As for PA, I don't know how many people still think these films are real by now but if they do exist, I feel sorry for them too.