An All-Star Tribute To Terror 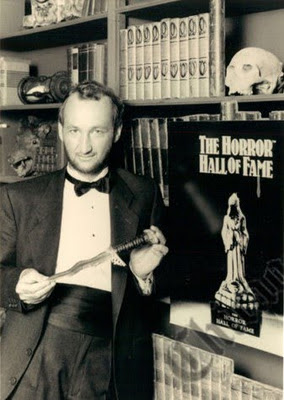 For the first time since I've been old enough to care about and/or stay up for the Oscars, I skipped this year's ceremony entirely. It wasn't any deliberate decision to boycott but rather an admission of total apathy. Even though I've often scoffed at the Oscars in years past, I've always felt connected enough to watch - if only to goof on them. This year, I didn't even care enough to do that.

On the upside, the occasion of the Oscars did inspire a couple of blog posts I that I really enjoyed from Kindertrauma and Freddy in Space, both coincidentally involving events that occurred twenty years ago.

Over at Kindertrauma, Unkle Lancifer waxed nostalgic about Silence of the Lambs' 1992 Oscar sweep while Freddy in Space posted the same year's genre's answer to the Oscars - 1992's broadcast of The Horror Hall of Fame, enthusiastically hosted by Robert Englund and billed as "an all-star tribute to terror."

Lambs' big night ought to have signaled a change in how horror was perceived by critics and studios but instead it just led - at least in the short term - to studios cashing in on the public's appetite for horror while labeling their films "psychological thrillers." Over time, Lambs' standing as a genre picture has become more widely acknowledged and studios have become less embarrassed to call their horror films horror but in '92, the perception of "horror" was closer to what was seen in '92's Horror Hall of Fame - the third and final outing for the annual ceremony that began in 1990.

Oscar hasn't been generous to the genre since '92 and as far as publicly honoring the genre goes, we now have the Scream Awards rather than the HHoF but the Scream Awards aren't exclusive to horror and also they're a little too "cool" for my taste. It's hip to be a geek now - sometimes obnoxiously so - and the Scream Awards reflect that. But in '92, being a genre fan was still regarded as dorky and The Horror Hall of Fame was, in turn, a little dorky itself - which exactly is why it's still endearing to watch.

In a way, 1992 was the best of both worlds. The genre achieved real prestige with Silence but was still off in its own private nerd corner with The Horror Hall of Fame. A year like that is worth its weight in (Oscar) gold.
Posted by Jeff Allard at 8:56 AM

Email ThisBlogThis!Share to TwitterShare to FacebookShare to Pinterest
Labels: Freddy in Space, Kindertrauma, Robert Englund, Silence of the Lambs, The Horror Hall of Fame, The Oscars

I remember that and wish they would do something similar now. Scream Awards are sort of like it, but they seems so... pre-packaged and commercial, which I know this probably was, too, but it seemed more earnest.

I remember very well how horror-centric the world seemed during that time when Silence won and the Horror Hall of Fame was on TV. That was also the same time when horror seemed to be all over TV with Shadow Theater, Saturday Nightmares and all of the other USA goodness that fed my horror hungry appetite.

You really didn't miss much as far as the Oscars go. Billy Crystal was grossly uninspired, not that it's much of a surprise, and the whole thing felt completely outdated, out of touch and out to bore everyone to death.

CJ, "earnest" is a good word for it. The Scream Awards just seems too calculated and soulless to me while HHoF was a more endearing celebration of the genre.

Matt, I did love all the genre TV in the early '90s. Even though I can pull any number of DVDs or VHS tapes from my collection to watch, I wish shows like Saturday Nightmares were still around. I'd almost rather watch a SN broadcast with commercials and all than watch the same movie on DVD. I can't explain it but I bet a lot of fans would feel the same way.

Good to know I didn't miss much on the Oscars. It just didn't even occur to me to watch it this year. I guess I've just had my fill of self-congratulatory nonsense.

I would say the oscars were boring if you do not love cinema in all forms. Crystal did a great job. I will always watch the show because I love the celebration of cinema.

I love all kinds of cinema, too, but many movie lovers would say that the Oscars doesn't do such a great job of honoring the most deserving films and would cite a long list of oversights and baffling choices - like when Ordinary People won Best Picture and Robert Redford won Best Director over Martin Scorsese and Raging Bull. The Oscars tend to be ruled by politics within the film community and that diminishes them in the eyes of some movie fans. I thought the nominees were more "off" than usual this year and I just didn't feel motivated to watch the ceremony. Maybe next year will be a different story...