The Horror Of A Long Time Ago 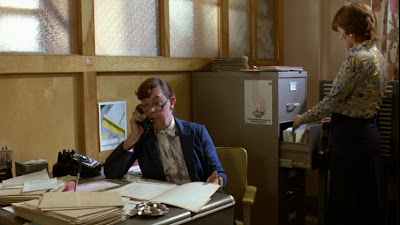 Early on in the 1981 slasher fave My Bloody Valentine, after the sheriff and the mayor of Valentine Bluffs have gotten the heads-up that crazed ex-coal miner Harry Warden might be back in town to resume the killing spree he started in 1960, an administrator from the mental hospital that Warden was committed to two decades earlier comes up empty in the search for Harry's files and tells the exasperated sheriff "Look, in twenty years any number of things could've happened!" as though she'd been asked to exhume records from the 1800's. 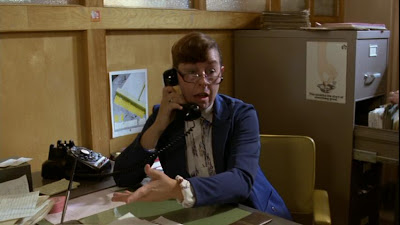 For all the times that I've watched MBV, I never gave this scene any notice - it's simply meant to drag out the mystery of whether Warden is alive, dead, or still institutionalized - but watching it recently, the suggestion that twenty years is such an enormous span of time made me more aware that I was watching a movie that was now over thirty years old.

As Richard Harland Smith pointed out in an interview with Final Girl's Stacie Ponder, the slasher cycle of the late '70s/early '80s is now approaching middle age. It doesn't seem possible that so much time has passed by and yet it has. And it doesn't seem possible that those films are so old now and yet they are. If you went back thirty years from the early '80s, you'd be talking about the stuff my mom watched as a kid, Atomic Age favorites such as Tarantula and Them! - movies that were percieved as cornball by most kids of my time (the first generation of Fangoria readers). It makes me wonder how kids today regard the slasher films from my day. For today's twelve and thirteen year olds, even the first Hostel is probably starting to look old.

The folksy ballad that plays over MBV's end credits sings about Warden's original 1960 murder spree as "the horror of a long time ago" but yet going back twenty years from today would be 1992. Would we refer to that as being "a long time ago?" No...we wouldn't, would we?

But when you realize that Dr. Giggles was released in '92 and that it turns (choke!) twenty this year, the answer is "yes." A sad, bitter "yes." That was a long time ago. Somehow knowing that Dr. Giggles is a twenty year old film makes me feel even older than knowing that Happy Birthday to Me celebrates its thirty-first birthday this year. At least I was a kid during the era of Happy Birthday to Me and the rest of that slasher cycle. But I was an adult when Dr. Giggles came out.

And, as it turns out, in twenty years time any number of things can happen - before in fact you even realize that twenty years have gone by.
Posted by Jeff Allard at 8:15 AM

Great post. I was thinking similar thoughts the other day when I was looking at a girl's ID and realized she had been born the year Jurrasic Park came out. Kind of made me go, 'wait, is that movie really almost twenty years old!' I can still remember sitting in the theater and feeling the breath of the T-Rex on me everytime it roared at the camera.

A lot can happen in 20 years... but nowadays it's all being recorded and tossed up on to the intertubes. It seems harder for it to feel so far away when all the people you knew back then are still yammering away on Facebook (if you dare)... and a good chunk of a hundred years worth of film can be watched whenever you feel like it.
It makes recent history seem a whole lot less historical somehow.

William, it's a weird thing to realize that there's a whole generation (or two) that were born well into your own adulthood.

Knob, I think that's the thing - all the pop culture that kids of the '70s and '80s grew up on is still thriving and readily accessible so it seems like we haven't moved on that much, that the "old days" are still with us in the here and now. But then you realize that a great deal of time really has passed.

I don't know. I guess everyone has to wrap their heads around the fact that they're getting older, that the world has changed, and that the culture that shaped their sensibilities is different than the one that the present generation is experiencing.