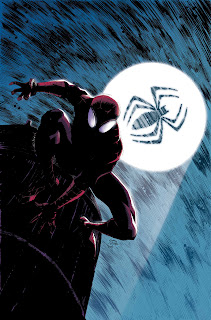 WARNING: We're going into full nerd mode here in talking about comic book shit. Proceed at your own peril!

Comic book history was made this week by Spider-Man scribe Dan Slott as he did the seemingly unthinkable - sending Peter Parker's soul or consciousness or whatever to that big ol' web in the sky while placing the brain waves of his long time arch nemesis Doctor Octopus in Peter's body.

It's the culmination of a storyline that had Ock on death's door for a few years in our real time but mere months in comic time. His body a ravaged, soon-to-expire husk, Doc Ock concocted a last ditch scheme to switch bodies with Spider-Man, leaving Peter Parker emtombed in Ock's dying body while Ock himself gained a new lease on life as Spider-Man.

Issue #700, where Peter makes a desperate final effort to switch back and fails, is touted as the final issue of Amazing Spider-Man, making way for the debut of Superior Spider-Man #1 next month. Fan outrage has naturally occured with many fans apoplectic over the change. On the surface, it's definitely a shock...but a skillfully executed one that promises an intriguing new status quo.

As a longtime Spidey fan, I have to say I love the audaciousness of this move. I know some fans are crestfallen at the thought of Spidey not just losing to Doc Ock but having his entire identity co-opted. But there are a few reasons why I'm welcoming the Superior era of Spidey. 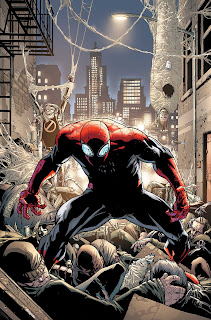 1) You Can't Make An Omelette Without Breaking A Few Eggs
As with any long-running comic character, Spider-Man's greatest foe is stagnation. After 50 years of web-swinging, Spider-Man is more than due for a giant shake-up. Other status quo-shattering events have rocked Spidey's world in the past but never like this. The last big change for Spidey was the evaporation in 2007 of his longtime marriage to Mary Jane Watson via the malefic manipulation of Mephisto but while that led to a fine new era of Spidey comics, branded as a "Brand New Day," the removal of the marriage felt like exactly what it was - a revising of continuity in order to get the book in line with where the editorial team felt it needed to be. It led to good books, ones that recaptured the soap opera-esque Spidey vibe of old, but it came across like an effort to turn the clock back on Spidey, erasing the "mistake" of the marriage, rather than moving him into new territory. This, however, is the real Brand New Day. 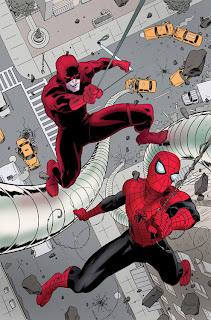 2) Everything Old Is New Again
Having Ock in Peter's body trying to be the "Superior" Spider-Man offers a whole new way of looking at the world of Peter Parker and Spider-Man. Ock may be trying to do good now but he's still an arrogant ego-maniac and his interactions with Spider-Man's cast of friends and foes is going to be entirely different than it has been previously. It doesn't take long to see the possibilities. For instance: how will Peter/Ock deal with having the other geniuses of the Marvel U like Tony Stark, Bruce Banner and Reed Richards now as allies and colleagues rather than as adversaries? Will he be competitive with them in a way that Peter never was? Will he see them as professional rivals or will his mad scientist soul be changed by having these people now include him as a valued peer? Mostly, though, I'm excited by the potential run-ins with Spidey's rogue gallery. The idea of Ock going head-to-head with Norman Osborn is enough to give me nerd shivers of delight. We've seen Spider-Man and The Green Goblin fight many times over the years but never like this. It can't help but to be epic. 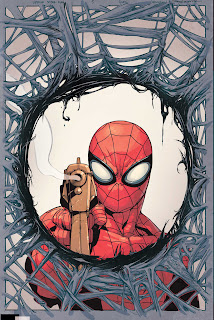 3) Slott's Lasting Legacy
Dan Slott has been the sole writer on The Amazing Spider-Man since November of 2010, after several years of being part of the revolving group of writers that formed a relay team of sorts during the Brand New Day era. Slott's solo stint on Spidey has been admirable, full of smart, rollicking adventures that have showcased Slott's love of the character. It's been exactly the kind of Spidey book you'd expect from a fan who got the chance to write the expoits of his childhood hero. It's always been a good run but at the same time it's always felt very...safe. This doesn't, however. This is an overturning of the apple cart that feels like Slott is out not just to be the momentary caretaker of Spidey but someone who is going to leave a lasting mark on the book. It was easy to see the influence of past Spidey runs on Slott's ASM issues but with the Superior Spidey era, Slott is venturing into fresh territory. This is going to be where he really makes Spidey history and I'm excited to see it. It also doesn't hurt that Superior Spider-Man's rotating roster of artists are among the best in comics today - Ryan Stegman, Humberto Ramos and Giuseppe Camuncoli. 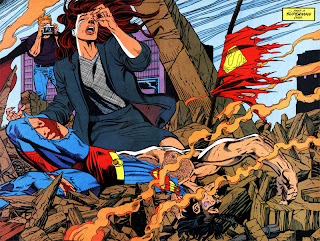 4) It's Comics, Man...No One Ever Really Dies
Finally, anyone who's actually agitated by these changes should remember that Spider-Man is not the first iconic superhero to meet what looks like a permanent end. Superman, Batman, Captain America - they've all bit the dust before and returned down the road. And in every case it was a fun journey to take. I'm sure this new Superior era of Spidey is well mapped out for the next year or two at least and I bet part of that plan involves Peter Parker. If it doesn't, oh well. I'm just eager to see where this new direction leads with no need of assurances on when or if it's going to end. So for now, make mine Superior. 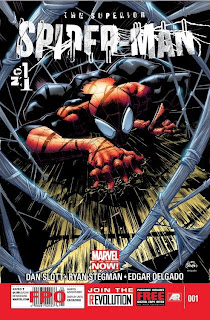 I like the idea of Doc Ock being the new Spidey, but I wish Slott had found a way to do it that wasn't as cheesy as this 'Freaky Friday' gone wrong scenario. The cheese factor is generally my main complaint with Slott overall. I like aspects of his writing, but some of his more gimmicky ideas grate on me (e.g. "Spider Island").

Anyway, I am signed up for 'Superior Spider-Man' for now, so we'll see how the first few issues play out. As far as Peter coming back, my money is on sooner rather than later, though not necessarily the way fans might be hoping. Don't know if you picked up 'Avenging Spider-Man 15.1', but it makes a good bridge between ASM 700 and the first issue of Superior. Anyway, there are a couple moments when Ock Spidey does things involuntarily that Doc Ock writes off as "muscle memory". My guess is Peter's consciousness is in there already. It's just a matter of whether it comes back slowly or quickly, but my money is on the two minds sharing the body at some point.

Yes, it's very clear from that Avenging Spider-Man issue that the line between where Ock ends and Peter begins is already blurred and will likely become even moreso as time goes on. That issue is a good bridge between ASM #700 and SSM #1 and really gives a good preliminary taste of the new era.

As for Peter coming back, I think we'll see something along those lines very soon. But I don't think he'll resume the mantle of Spidey - he'll have some other function in the book. As he says at the end of ASM #700, he can't go back to being Spidey, even if he returned to his body because in trying to kill Ock he crossed a line he swore he never would so maybe Peter will return but he'll have some kind of redemption arc going on.

And regarding the cheese factor of Slott's writing, it's definitely there but I find it endearing in its "comic book-y-ness". I can see how it would rub some the wrong way, though. Maybe he'll dial down that cheese factor in SSM.