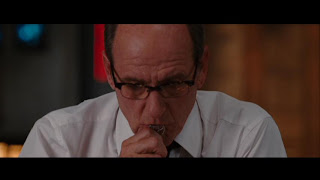 Another year in fear is ending so it's time to drum up a list of the best films of the year. Not such a tough task this year as 2012 wasn't short on decent genre films. My top five, plus a handful of honorable mentions, are over at Shock Till You Drop now. My extended thoughts on each film are at Shock but the titles are Cabin in the Woods, Dredd, The Pact, Prometheus, and Excision - all fine films in my book, even if I have a couple of critical qualms here and there.

A couple of 2012 films that I liked but failed to mention in my Shock piece are The Woman In Black and Abraham Lincoln: Vampire Hunter. The Woman In Black was on the tepid side but it was still a solid slice of supernatural hokum. If nothing else, I'll always hold it in great affection as the first big screen horror movie that I took my son to. As for Abraham Lincoln: Vampire Hunter, it was roundly derided by virtually everyone but I love that such a goofy subject was afforded such a lavishly produced film. I dig it when big expensive genre films that have absolutely no business being big expensive genre films (not if the people putting up the money ever expect to see it back, that is) get made and AL:VH is the best example of that in awhile. It's 100% sincere - a full-on action horror film without any tongue in its cheek, no matter how ridiculous it becomes, and I'm all for that.

Email ThisBlogThis!Share to TwitterShare to FacebookShare to Pinterest
Labels: Best Of 2012, Shock Till You Drop

kudos for Cabin in the Woods and I also enjoyed Dredd. I will try to check out the others