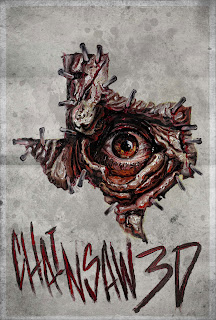 This movie has, and will continue to get, a shitload of flack from horror fans who feel that it's nothing less than a desecration of the TCM name (to be fair, it literally is as it doesn't even include the 'M'!) but I guarantee you that had this come out back in the '80s, it would be every bit as fondly recalled as any of the other slasher sequels of that era. I don't mean that it's good, mind you, just that it would be judged by a very different standard. For myself, I'll be judging it by that other yardstick - the same one that lets me enjoy Jason Takes Manhattan. When you're a slasher fan, you have to take your fun where you can get it. And, despite what the tagline to Pieces says, sometimes you do have to go to Texas for a Chainsaw Massacre.
Posted by Jeff Allard at 8:53 AM

Well, thanks for taking the bullet on that one and reporting back. Not that I was even mildly tempted to have a peek.
I continue to think that the original was lightning in a bottle that won't ever be caught again.

It's true. Not even Hooper himself could capture it again in quite the same way.

Sometimes we just have to see a movie because we want to see something good and well it doesn't always work out. Thanks for the review