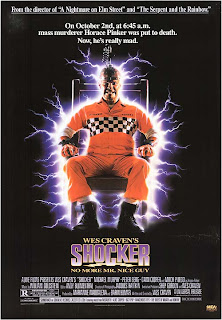 I often have trouble trying to make any rational sense of why I love certain films and sitting high on that list of head-scratchers is Wes Craven’s Shocker. I caught Shocker in the theaters way back when and I’m not sure what my state of mind was on that fall night back in ’89 but clearly I was extremely open to what Craven was dishing out.

I was so open to it, in fact, that while it was still in theaters I would happily tell anyone who asked that, yeah, it was great – go see it! It was only once it hit video that it finally dawned on me that Shocker might not hold much appeal for anyone else – even if it did boast one of the best metal soundtracks of the era.

Shocker was intended to be, at least in part, Wes Craven’s strike back at New Line for the direction they took the Elm Street franchise. Craven and New Line never quite saw eye to eye on Freddy and as they owned Freddy down to the last thread on his sweater, they called the shots, leaving Craven to stew on the sidelines as his dream stalker was turned into an increasingly corny, MTV-friendly jokester.

With Shocker, made for Alive Films and distributed by Universal, Craven hoped to repeat the success he had with Freddy and create a new, sequel-ready horror superstar, this time around having full participation in the ensuing franchise. Unfortunately, despite the electronic affinities of its villain, Shocker didn't make lightning strike twice for Craven. 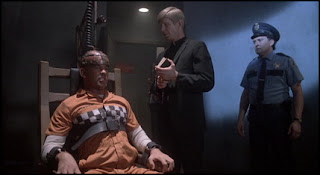 Shocker’s story involves Jonathan (Peter Berg), a college football player who, in a precognitive dream, sees the majority of his adoptive family slain at the hands of serial killer Horace Pinker (ferociously played by Mitch Pileggi, still a few years away from his most famous role as Skinner on The X-Files) the same night that the horrible deed happens and he uses the clues that he saw in his dream to help his police captain father (Michael Murphy) track the psycho to his dilapidated TV repair shop and bring him to justice, after which he is swiftly sentenced to death. While in real life, Pinker would've sat on Death Row for years while his lawyers filed appeal after appeal, in Shocker Pinker is sent to the hot seat in no time. However, throwing the switch on Pinker only turns him into an even bigger threat as he uses black magic to allow his spirit to survive his electrocution.

His new state of existence allows Pinker to transfer his essence from one living host to another and he zaps his way from one unwilling host – cops, little kids, etc. – to another as he tries to take Jonathan out of this world. Shocker grows increasingly daffy as Pinker’s powers in the electronic realm increase, climaxing in one of the most outlandish final chases in slasher history as Pinker and Jonathan both enter the electronic world and chase each other at length across every channel on television – running through news broadcasts of street riots, archival footage of the Hindenburg disaster, a religious program (hosted by Timothy Leary in a cameo role as a televangelist), rock concerts, and even Leave It To Beaver.

At one point, they spill out of the TV into a family’s living room where a mother squawks: “I’ve heard of audience participation shows but this is ridiculous!” 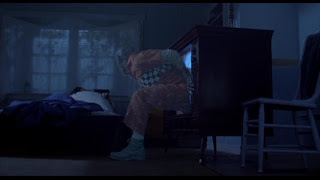 It’s often said that if you give someone enough rope they’ll hang themselves and that’s the case here as Craven sends Shocker off the rails in spectacular but fascinating fashion. That said, the sincerity that Craven shows towards his material is apparent. On one hand, Craven was trying to create another cash cow to rival Freddy, which is – on the surface – a cynical venture. But on the other hand, it’s plain to see that Craven was very genuine in regards to putting some heart and thought into Shocker. With its satirical jabs at television and the media culture, the movie is like a dig at the glib “fast food” mentality that New Line applied to the Freddy sequels. The fact that everything in Shocker doesn’t quite gel doesn’t diminish my admiration of the attempt. And if nothing else it also must be noted that Pinker crawled out of a TV screen many years before it became the signature move of Ringu's Sadako.

I no longer regard Shocker as being especially good but I do regard it fondly. It's kind of a mess but it bristles with its own lively brand of electricity.

I still have a soft place in my heart for this film. I absolutely love the first half of the film-some of Craven's best work in my opinion. It's the second half after Pinker's death that reeks of cheese. That being said, I still will watch it till the end when I run across it surfing cable.

The second half of the movie is so gonzo you have to wonder what Craven was thinking. I'd love to know what he had planned for sequels.