Don't Try To Tell Me This Isn't Cool 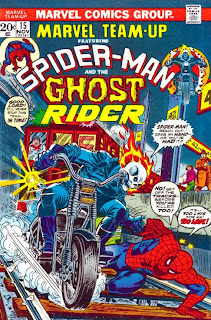 Some things are just awesome and there's no debating it. Like the above cover to Marvel Team-Up #15. Seriously, what's not to love about that? Illustrated by the cream of the crop likes of Gil Kane and John Romita Jr., this has got bad assedness burned into every line.

Ghost Rider staying just ahead of an onrushing subway train, trying to pick up a dazed Spidey before they're both crushed by however many tons of screaming metal are bearing down on them? Daaamn!! And it could all be originally had for the low cost of 0.20? I practically consider that stealing!

Even by the '80s, covers like this had already fallen out of fashion in comics in favor of less hyperventilating depictions of excitement (no more words balloons with breathless exclamations like "Good Lord! I'll never stop this train -- in time!") and, for the life of me, I don't know why.

It's the same with horror movie posters. Once they reeked of hyperbole and promised lurid entertainment but that kind of zealous hucksterism became considered...I don't know...cheesy? Again, I don't get it. Why would you ever think that making something less awesome is better? It's enough to make you throw up your hands in exasperation.

Now, it should be said that the comic behind this cover isn't so hot. Scripted by Len Wein with art by Ross Andru (the most unsung Spidey artist of them all), "If An Eye Offend Thee..." is the somewhat routine account of Peter Parker and Mary Jane, both out at Madison Square Garden to see Ghost Rider's Motorcycle Extravaganza when Peter has to ditch MJ to help out as Spidey as the Ghost Rider tangles with The Orb and his motorcycle minions. It's servicable enough as team-ups go...just not nearly as gripping as the cover would suggest.

But hey, that cover is tough to live up to. The world is full of many things created by man that remind you of the madcap majesty that some gifted souls are capable of. Things that make you go "Wow, that's something!" Or words to that effect. The ceiling of the Sistine Chapel, the Great Pyramids...and the cover to Marvel Team-Up #15.
Posted by Jeff Allard at 8:07 AM

I have that comic. I bought it when I was a kid. I remember being very disappointed that the scene didn't appear in the comic. The extremely gruesome reveal of the Orb without his mask almost made up for it.

Yeah, that was a gruesome panel, to be sure. Too bad the scene on the cover didn't make it into the book but that's the kind of fake out that ran rampant in the Bronze Age.

This reminds me of how movie previews when I was a kid often featured something other than actual scenes from the movie... like the first preview I saw for American Werewolf in London. There was often something much more mysterious and inviting to them than just showing a condensed version of the film.
The previews for Ice Station Zebra make it sound more like a ride at Disneyland than a movie.
Like you say, movie posters were often a lot more lurid/intriguing as well... the only movie ad art I've been aware of lately are the posters for the fake movie in the background scenes of Argo.

Yeah, there's still cool comic covers and movie posters today but it's certainly not the same and I don't know why the older style got phased out to begin with. I grew during the time that shift took place and I can't explain it. It just seemed to...happen.

I'm with you on the coolness and excitement of the comic covers of yesteryear, with the hyperbolic word balloons and cliffhanger declarations. It made the cover kind of like the teaser trailer that makes you want to see the movie.