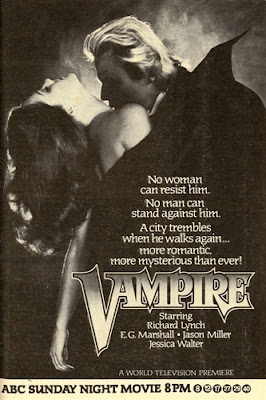 Having not read Seth Grahame-Smith’s novel, I didn’t know what to hope for from the first footage of Abraham Lincoln: Vampire Hunter but I have to say my initial reaction upon seeing the first clips was one of slight dismay. The sight of Lincoln boasting apparently superhuman strength as he splinters a tree into toothpicks with one mighty swing of an axe and seeing him engaging in Matrix-style fighting moves told me right away that this wasn’t the kind of vampire hunter movie I was hoping to see. Then again, they just don’t make those kinds of movies anymore.

While Abraham Lincoln: Vampire Hunter might well turn out to be great fun (if not for me, then at least for others), my weariness at watching the overblown action elements on display in its commercials and trailers sent me searching for solace in old-school vampire hunting as depicted in the 1979 TV movie Vampire.

1979 happened to be a banner year for bloodsuckers with the release of both John Badham’s Dracula remake and Werner Herzog’s remake of Nosferatu in theaters and on TV, the premiere of Tobe Hooper’s Salem’s Lot adaptation as well as the serial The Curse of Dracula as seen on the short lived but fondly recalled NBC series Cliffhangers. Lost in the shuffle was Vampire, a minor but entertaining TV movie that was intended as a pilot for a series that never came to be.

Directed by the wonderfully named E.W. Swackhamer (who, during the course of his career, directed episodes of everything from I Dream of Jeannie to The Partridge Family), Vampire was co-written by Steven Bochco, who would go on to be the co-creator, writer and producer of some of the most successful and critically acclaimed TV programs of the ‘80s and ‘90s – including Hill Street Blues, L.A. Law and NYPD Blue. Bochco’s co-writer on Vampire was Michael Kozoll, whose previous television credits included penning a couple of episodes of Kolchak: The Night Stalker and who would later reteam with Bochco on Hill Street Blues as co-creator and fellow head writer.

Bochco and Kozoll’s script for Vampire is not nearly in the league of their better known work but it is serviceable, if rudimentary, and it has the advantage of being brought to life by a top-notch cast – including Jason Miller (The Exorcist), E.G. Marshall (Creepshow), Kathryn Harrold (The Sender), and bad guy extraordinaire Richard Lynch (The Sword and the Sorcerer, Bad Dreams). Even Maniac’s Joe Spinell shows up in one scene as a police captain.

With a cast like that, it’s a crime that Vampire has been largely forgotten over the years. As Vampire begins, the construction of a new church in San Francisco causes the slumbering form of Anton Voytek (Lynch), a seven hundred year old Hungarian prince, to awaken. Forty years earlier, he was buried on the site when his old lair collapsed on him during a fiery battle with a police detective determined to extinguish Anton’s evil from the world once and for all and he has laid there ever since, oblivious of the passing decades until the recent construction began.

In charge of the building project are the happy couple of esteemed architect John (Miller) and his wife Leslie Rawlins (Harrold). Thanks to this project, their stars are rising on the San Francisco social scene but all that success and happiness is about to be shredded once their attorney and friend Nicole Decamp (Jessica Walter) introduces them to her new boyfriend – the dapperly-dressed smoothie known as (da-dum!) Anton Voytek. Anton, like any good vampire, has a fortune to his name but when he hires Nicole’s trusted friend John Rawlins to excavate an old estate in order to retrieve the many priceless artifacts and works of art that he has accumulated over the years, John recognizes many of the works as being stolen goods and drops the dime on Anton.

Anton is arrested and although his new lady friend bails him out before dawn (with barely enough time for him to flee through the streets of San Francisco back to his coffin), Anton vows revenge on John and he soon makes good on that threat by paying Leslie a night time visit. After Anton shatters John’s world, bloodsucker style, Vampire becomes a bitter battle between John and his undead adversary, with a curmudgeonly ex-cop named Harry Kilcoyne (Marshall) allying himself with John in order to stop Anton for good. Harry’s ex-partner is the one who put Anton in the ground years earlier and now it falls to the vigilant Harry to continue the fight. But will these two mortal men be enough to end an immortal vampire’s reign of terror?

During the course of this writing, the sad news was announced that Richard Lynch had passed away at the age of 72. As you would expect based on Lynch’s infallible record of essaying evil doers, he makes for a hell of a vampire – both sinister and suave as he rocks his impeccably slick late ‘70s duds. He isn’t on screen long in Vampire but his impact is felt throughout the film. As with every role he ever played, his persona leaps off the screen.

For their part, Miller and Marshall make an appealing pair of vampire hunters. For younger fans, I expect that Vampire might come across as being as dusty and dry as (cemetery) dirt but for older fans – or for anyone who needs a respite from non-stop razzamatazz – following the dogged and determined efforts of Miller and Marshall makes a welcome mental tonic. At this point, to watch a vampire film where the vampire hunters are just two craggy-looking dudes tooling along the San Francisco coast in a station wagon is ideal to me. I’ve had enough of bullet time, slo-mo, CGI, all of it.

There’s no gymnastics in Vampire, no 30-foot leaps in the air, no morphing, and I like it like that. Vampire is so low tech in fact, that it looks like there wasn’t even enough money in the budget for fake fangs but that’s cool. They do, however, feature an effect that I’ve never seen utilized in a vampire film before – when Anton is struck by a cross, instead of the usual sizzling skin, electrical sparks fly off him.

As Vampire was intended to be a series pilot, the movie’s conclusion is an open ended one. There’s no final staking, no roasting at sunrise, none of the usual climatic payoff that you’d expect from a vampire film. The best John and Harry can do is momentarily route Anton’s plans but given recent events, it’s actually a comfort to see Lynch slip freely into the night – his brilliant brand of menace fought to a standstill but undefeated and ready to return with a vengeance.

Originally published on 6/20/12 at Shock Till You Drop.

Couldn't find a TV spot for Vampire but hey, here's a nifty promo for Cliffhangers from '79 with a bit of Michael Nouri's Dracula! Enjoy!

I agree! Vampire 1979 starring Jason Miller and Richard Lynch was an awesome lost gem of a film! I loved it. I just watched it today and it still really had me in suspense. It was a film built on solid acting talent. Very sad about Richard Lynch..R.I.P. This film is awesome..

Lynch was excellent as Anton voytek. Then again , he was excellent in virtually everything he did. From the sword and the sorcerer , to his TV appearances on Galactica and ATeam. Vampire is a great film .