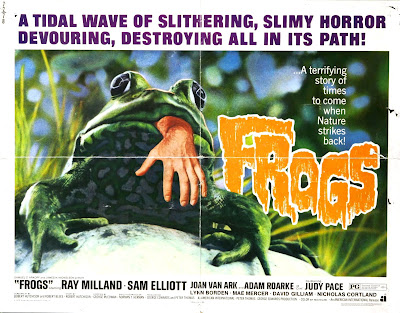 By the 1970s, mankind had finally realized that, as species go, we were pretty much the worst thing to ever happen to the planet – what with treating the natural world as our own personal dumping ground, pumping pollution into the air, and poisoning the waters with chemicals – and so the modern environmental movement was born.

Not only was this a hopeful development for the survival of the Earth but it was also terrific news for connoisseurs of B-movies as “eco-horror” became a popular trend and the ‘70s became a decade when – on screen, at least – nature had finally had enough of man’s bullshit.

In Frogs, directed by George McCowan and written by Robert Hutchison and Robert Blees, a young Sam Elliott stars as Pickett Smith, a freelance photographer busy taking pictures of the trash-strewn Southern swamplands surrounding the island estate of the wealthy Crockett family. While paddling around the Crockett’s property, Pickett’s tiny canoe is accidentally overturned by the careless motorboat antics of cocky Clint Crockett (Adam Roarke), who’s racing across the water with his sister Karen (Joan Van Ark) along for the ride. After capsizing Pickett’s canoe, Clint and Karen fish Pickett out of the water and, after apologizing, take him back to the family estate to change into some dry clothes.

The Crocketts are preparing to celebrate the next day’s 4th of July holiday as well as the four Crockett family birthdays that all fall within the month of July and Pickett is invited to stay. The hard boiled patriarch of the Crockett clan, the wheelchair bound Jason Crockett (Ray Milland of X: The Man With the X-Ray Eyes), whose fortune was made in chemicals, grills Pickett on why he was taking pictures on his private property but it doesn’t take long for Pickett and Jason to develop a bristly, but not disrespectful, rapport.

Pickett explains that he’s doing a layout on the effects of pollution but all that environmental talk doesn’t hold much water with Jason Crockett. Bitter and bullheaded, he doesn’t have any apologies to make or any remorse to express for the way he treats Mother Earth. And he also holds no patience for the army of frogs that are slowly encroaching on his property day by day and the ever-maddening cacophony of croaking that they unleash every night so Pickett’s talk of environmental abuse falls on deaf ears.

With the entire Crockett clan gathered at the estate for the holiday celebration, we’re introduced to the kind of large cast that’s always a clear indication to horror fans that a film’s body count will be high. And in that regard, Frogs does not disappoint. Besides Jason, Clint, and Karen, there’s also Clint’s wife Jenny (Lynn Borden), their two preteen kids, as well as various aunts, uncles, cousins along with household staffers Charles (Lance Taylor Sr.) and Maybelle (Mae Mercer) – and not a single one of them are the least bit alert to the fact that, on the eve of America’s greatest holiday, that nature has declared war on them.

As the 4th dawns, the various animals, amphibians, reptiles, and insects that make their home on, or around, the grounds of the Crockett estate roll out their own plans for celebrating Independence Day. Rather than the expected cookout and fireworks, it’s the Crockett’s vs. the Croakers in a 4th of July showdown. As various species come together in an unlikely coalition, with the frogs presumably acting as generals, it’s like Cyrus’ unrealized plan in The Warriors to unite every gang in New York City into one unstoppable army. Here, it’s about the unprecedented affiliation of frogs, lizards, alligators, spiders, birds, turtles and – just for good measure – leeches (apparently snails, crickets, and earthworms missed the memo and failed to show up for battle).

Those who haven’t watched the movie might (understandably) assume that Frogs goes for the campy approach but it doesn’t. There’s no winking, no ironic acknowledgment of how absurd the premise is. This was, thankfully, a movie made years before it became customary to approach B-material with a smirk. Taking a straight-faced approach with this story does present challenges, however. Like, how is it believable that any full-grown adult would get done in by the likes of frogs or butterflies?

The answer is that they’d have to practically shoot themselves in the foot first and that’s more or less exactly what happens to one character here as they make the mistake of running with a rifle in hand only to trip and shoot themselves in the shin – which then makes them easy pickings. Other doomed characters in the film simply aren’t able to get the upper hand when it counts – no matter how unimpressive their attackers might be. When you get taken out by a turtle, for example, that’s a humiliating death – even if it is a snapping turtle and thereby must be automatically considered to be more ferocious than any ordinary turtle.

All the deaths in Frogs are protracted and quite nasty. They’re kind of sad to behold, frankly, as the characters get it pretty bad – most notably dotty old Aunt Iris (Holly Irving), who has cause to regret her hobby of collecting butterflies during her last tortuous moments on Earth.

As silly as it might be to consider that this absurd film is even the least bit unsettling, I maintain that Frogs possesses a weirdly disturbing quality – perhaps because it spends so much time lingering on the suffering of each victim. No one dies a sudden, quick death in this movie and the howls of agony that some give out are grim to behold as they are slowly overwhelmed by the vengeful emissaries of nature.

The original blueprint for the eco-horror subgenre, of course, was Alfred Hitchcock’s classic The Birds (1963) but Hitchcock was not interested in serving up a message and, in keeping with the Daphne du Maurier short story that his film was based on, left the motivation of his feathered fiends unexplained – an artistic choice that made The Birds difficult to imitate.

It wasn’t until environmental abuse became a hot issue that filmmakers were given a story hook they could understand in regards to unleashing nature on man. As a result, the eco-horror films of the ‘70s have always seemed to be a separate species from the enigmatic Birds – even when they involved actual birds.

Among that group of revenge of nature films, in which payback was the order of the day, Frogs remains a movie that leap (frogs) past its creepy crawly competition.

Originally published on 7/3/12 at Shock Till You Drop.