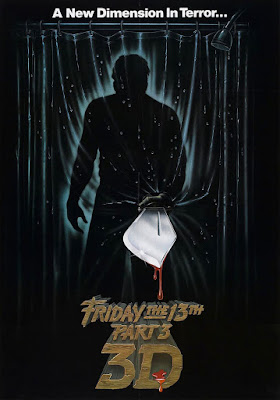 As the summer of 2012 rolls on, tributes to and fond reminisces of the summer of ’82 continue to pepper the internet as that legendary summer – one that arguably yielded the biggest bumper crop of genre classics ever – celebrates its thirtieth anniversary. The most famed titles of that summer are never far from the hearts and minds of genre fans as films like The Thing, Blade Runner, and Poltergeist continue to be obsessed over, three decades after their releases.

But the summer of ’82 wasn’t just about its genre milestones (even if the films that fit that description now weren’t all recognized as such back then). No, there was also a fair share of schlock to be found. In the case of films like Don Coscarelli’s The Beastmaster, it was often golden, grade-A schlock as only the early ‘80s could supply – but it was still schlock nonetheless.

One film from that history-making summer that fit firmly into the schlock category was the third installment of the Friday the 13th saga, with Jason slashing to the same familiar beats but this time doing it in 3-D. Just three films into the series, the limiting nature of Friday’s body count formula was evident. Although initial discussions on Part 3 had involved the idea of continuing the story of Amy Steel’s character from Part 2 as she dealt with her trauma in a mental institution, that new direction never took hold. Instead, a choice was made to stick to the tried and true elements that had proven to be popular with audiences. That meant bringing another group of young kids into the woods to be slaughtered by Jason.

With so little to differentiate Part 3 from its predecessors, though, Friday’s producers felt they needed a hook to draw audiences back for more of the same. Luckily, 3-D was on the rise again and it seemed like an obvious match for a Friday film. This time around, the new batch of kids heading to their doom weren’t camp counselors but rather a loosely gathered bunch of friends looking for a weekend getaway on the rustic grounds of Higgin’s Haven.

You would think that even the dumbest of kids would have second thoughts about partying anywhere near Crystal Lake as, within the timeline of the series, the grisly events of Part 2 have just happened and the killer is very much still at large. But in the world of Friday the 13th, good sense would only get in the way of a good slaughter so this group of fun-loving kids throws caution to the wind with nary a second thought, piling in the van with plenty of weed on hand and heads to their secluded weekend getaway.

As much as the majority of Part 3 indulges in déjà vu nods towards the first Friday (an under the hammock kill that mirror Kevin Bacon’s death in the original, a final dream sequence with another leap from a lake), it isn’t all idle repetition. We’ll get to the addition of Jason’s famous face gear momentarily but first, it should be noted that we learn an essential new “don’t'” in the Friday the 13th universe in Part 3 in addition to the already familiar maxims of “don’t have sex” and “don’t do drugs.” Some might believe it to be unnecessary for this particular “don’t” to be explained but Part 3 confirms that when you survive an encounter with Jason, it’s a terrible idea to test your luck with a rematch.

Teaching us that painful lesson here is the character of Ali (Nick Savage) – a bad-ass biker who isn’t content with living to tell the tale of his brush with Jason. Ali first takes on Jason in a barn and is quickly beat down in what appears to be fatal fashion. But while Jason leaves him for dead, Ali pops up again towards the end of the film in a surprise resurrection worthy of Jason himself, momentarily distracting Jason from his attack on Final Girl Chris (Dana Kimmell).

But having the element of surprise on his side isn’t enough of an edge for Ali as Jason immediately chops off the biker’s right forearm before finishing him off for good. When it comes to Jason, if you should ever miraculously survive Round 1, DON’T challenge the Sultan of Slaughter to Round 2.

Of course, Part 3 is famously the film where Jason established his signature look as his iconic hockey mask was introduced – the most important contribution to the series aside from Harry Manfredini’s Ki-ki-ki Ma-ma-ma score. It’s never been decisively determined who made the creative decision concerning Jason’s hockey mask but whoever did come up with it, they gave Jason one of the most distinctive looks of any screen psycho.

The Friday series pretty much fell ass-backwards into its own mythology over the course of the series’ early films but this is the one where things began to get fully locked down. This was also the first Friday to establish the tradition of bringing in random victims outside of the core group of characters just to put up bigger numbers for Jason.

In the first two films, you needed a harbinger of doom to provide some unheeded warnings so Crazy Ralph wasn’t so out of place and, of course, the law had to get more directly involved eventually so the sheriff in Part 2 wasn’t so random but Part 3 was the first Friday that brought in completely extraneous characters just to have them killed.

If you loved the banana-eating hitchhiker in The Final Chapter, or any of the many ‘walk-on’ victims that have appeared in other Fridays over the years, you can thank Part 3. It was with this film that the producers realized that it was always better to fill screen time with someone getting killed – no matter whom it was or what part they played in the film. Hence, in Part 3 there’s Harold, the luckless shop owner (played by the late Steve Susskind) and his nagging wife Edna (Cheri Maugans) as well as Ali and his two sidekicks in mischief, Fox (Gloria Charles) and Loco (Kevin O’Brien), who all run afoul of Jason.

Screen time that in the previous films might’ve been spent on moments of character development with the main cast were now used to deliver more of the moments that audiences came to see in a Friday the 13th film. No more downtime as we listen to Bill strum his guitar, or a buzzed Ginny theorize at a local bar about the legend of Jason – Part 3 changed the pace of the series.

This practice of shoe-horning in more and more kills reached its apex in A New Beginning with its staggering body count of seventeen (twenty-one, if you count the death of the bogus Jason along with his son’s death and two dream deaths in the pre-title sequence).

As with Part 2, encoring director Steve Miner staged yet another exciting final chase with Richard Brooker’s Jason pursuing Chris over every inch of Higgins’ Haven. With Jason portrayed as a hard to kill backwoods psycho, rather than as a reanimated zombie (as an old-school Friday fan, I continue to prefer this earlier version of Jason), Brooker gets to display some moments of human rage during the film’s climatic chase – as when he throws a frustrated fit in a barn stall when it momentarily looks like Chris has eluded him.

It was moments like these that suggested, albeit briefly, an extra dimension to Jason beyond what was engineered by 3-D technology. Many fans consider 1984’s The Final Chapter to be the quintessential Friday but I think Part 3 deserves that mantle a little bit more. It was where the series became more polished in its presentation and where Jason became a true slasher icon. It made the difference between the Friday films going on to be an enduring franchise or simply closing out as a trilogy.

But even if you don’t regard Part 3 as being the quintessential Friday, its place in the line-up of ’82 means that it’ll always be remembered as part of a classic summer gone by.

Originally published on 7/25/12 at Shock Till You Drop.

I remember first seeing this with some friends and finding it all pretty hilarious.
You're right on with how Pt. 3 establishes what is to come... for good or bad.
I'm another who prefers the earlier Jason, whatever he was.

Yeah, the zombie version of Jason has his appeal for sure but I much prefer the backwoods psycho Jason.