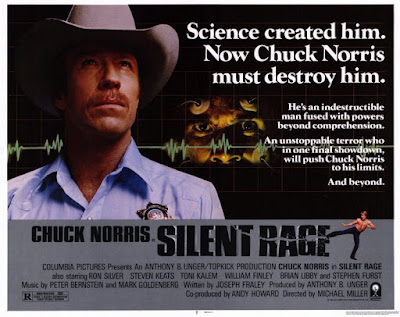 With the ‘80s action hero ensemble The Expendables 2 currently on theater screens worldwide, it’s worth remembering that most of these men of action have dabbled in horror over the years. Bruce Willis has the ghostly hit The Sixth Sense (1999) to his credit; Arnold Schwarzennegger went toe to toe with a tenacious space-spawned hunter in the classic sci-fi/horror hybrid Predator (1987) and took on Satan in End of Days (1999); Sylvester Stallone battled a serial killer in the little-seen Eye See You (1999) and some would say that his violent cop thriller Cobra (1986) rests comfortably on the periphery of the ‘80s slasher genre. But despite the various merits of those films, I have to single out the Chuck Norris vehicle Silent Rage (1982) as a true action/horror favorite.

In Silent Rage, directed by Michael Miller and written by Edward di Lorenzo and Joseph Fraley, Chuck plays Sheriff Dan Stevens, the head lawman of a small town who finds himself at war with a relentless human killing machine. Some would say that nature alone could never create a being powerful enough to go up against Chuck Norris and the makers of Silent Rage wholeheartedly agreed, making their unstoppable maniac (Brian Libby) the Godless product of scientists who commit the mistake of reviving a homicidal killer hovering on Death’s Door.

Not only is he granted a new lease on life, but thanks to the miracle of genetic engineering, this psycho can now withstand almost any form of physical harm. The “almost” is where Chuck Norris comes in. As Silent Rage begins we meet Libby’s character of John Kirby as he wakes up in the boarding house where he’s been staying. Kirby receives a concerned call from Tom Halman, his psychiatrist (Ron Silver), and during the brief call Kirby struggles to talk while fumbling in vain for his medication.

This homicidal outburst, naturally, brings Chuck onto the scene. While he has back up available in the flabby form of his devoted deputy Charlie (Stephen Furst, best known as Animal House’s “Flounder”), Chuck goes in alone like the one man army that he is and, after a prolonged fight, he puts Kirby in cuffs.

Unfortunately while waiting in the back of a cruiser, Kirby breaks free and the cops on the scene have no choice but to gun him down, much to the anguished protest of Halman, who arrives too late to spare his troubled patient.

Barely alive, Kirby is taken to the medical facility where Halman works and where, it just so happens, groundbreaking genetic research is being done (not the thing you’d expect to find in a small town, but whatever). Against Halman’s ethical protests, Kirby is revived by the ambitious and scientifically ruthless Dr. Philip Spires (Steven Keats) and Spires’ devoted toady, Dr. Paul Vaughn (genre regular William Finley).

Thanks to an injection of Spires’ experimental serum, Kirby is now virtually impervious to injury. Why Spires couldn’t have waited to give the gift of invincibility to someone who wasn’t a psychotic murderer, we don’t know, but scientists in movies are prone to making catastrophically bad decisions.

Once the new and improved Kirby gets his feet on the ground, he covertly exits the lab and pays a nighttime visit to Halman – and it’s not for a therapy session. The home invasion that follows as Kirby arrives at Halman’s isolated abode is Silent Rage’s horror centerpiece as the malevolent Kirby goes after both Halman and then Halman’s wife. The scene isn’t graphically gory but instead features expertly staged suspense (a prolonged pursuit is punctuated by a surprise head slam to the wall that effectively startles, even on repeated viewings).

The towering Libby is truly sinister as Kirby and he stands out as one of the more formidable movie maniacs of the ’80s. While the majority of Halloween and Friday the 13th rip-offs that were in theaters at the time made splatter FX their selling point, Silent Rage went light on gore but applied hard-hitting action to the slasher formula.

The climax to Halloween had Michael Myers shot off the second floor balcony of the Doyle home and fall with a heavy thud on the dirt of the Doyle’s backyard but in Silent Rage, Kirby is shot through the glass window of a medical facility and plummets about five floors down to the pavement and that’s just the start of an extended climatic battle between Kirby and Sheriff Stevens (one that sees Kirby undergo a head to toe burn similar to the one that Myers endures in Halloween II).

It might not have been any direct inspiration on trends to come but certainly the stunt-heavy nature of Silent Rage did anticipate the more action-oriented approach the slasher sub-genre adopted as the ’80s went on. Once the MPAA all but outlawed gore by the mid-‘80s, it left filmmakers little choice but to turn to action as a readily exploitable, and more easily MPAA sanctioned, element.

Latter day Halloween and Friday the 13th sequels were much more aligned with action cinema than the series’ earlier films had been. Witness scenes like Michael Myers battling gun-toting members of a Haddonfield posse while on the back of a speeding pick-up truck in Halloween IV: The Return of Michael Myers (1988), the spectacular RV crash that Jason survives in 1986’s Jason Lives: Friday the 13th Part VI, or even the wink to the James Bond series seen in that film’s title sequence.

The final frames of Silent Rage left the gate wide open for a Silent Rage 2 but sadly a sequel never came about. Either the film wasn’t regarded as a big enough hit (it grossed just under $11 million in US theaters) or else Norris was simply on to bigger things as his career was moving into its peak years with hits like Lone Wolf McQuade (1983), Code of Silence (1985), and others.

Norris is regarded these days as something of a camp character – especially by younger fans who, thanks to late night host Conan O’Brien, think of him first and foremost from the long running TV series Walker, Texas Ranger (1993-2001) – but Silent Rage is a good example of the straight-forward B-fare he originally made his name on.

As a reminder of an earnest exploitation era when slasher films and Chuck Norris pictures were two of the best reasons to go to the movies, Silent Rage endures as a satisfying and high-kicking genre hybrid.

Originally published on 8/31/12 at Shock Till You Drop.