Retro-Shock Theater: The City of the Dead aka Horror Hotel (1960) 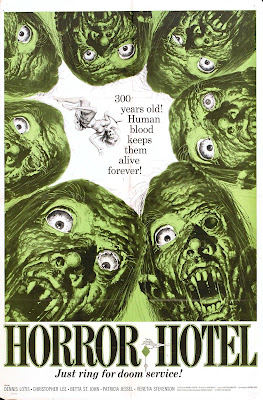 Back in my school days, I never went the extra scholastic mile.

Maybe it was because it seemed like too much of a brown-nosey thing to do but more likely I’d have to chalk it up to laziness. Either way, I never went above and beyond for any assignment. If only Nan Barlow (Venetia Stevenson), the academically ambitious heroine of 1960’s The City of the Dead (aka Horror Hotel), had shared my same apathetic attitude.

A rapt student of history teacher Professor Alan Driscoll (Christopher Lee), Nan doesn’t plan on just phoning in her senior paper on witchcraft. No, this eager young woman is going to do way more than just regurgitate what she can research in the school library. She plans to use some vacation time to visit a real town where witches reportedly once lived and uncover the hidden history behind those dark days of old when people were burned alive for dabbling in the black arts.

When Nan informs Professor Driscoll of her plans, he knows just where to send this irrepressible go-getter – the sleepy town of Whitewood, Massachusetts, a place where time seems to have stood still. As viewers, we know from the jump that witchcraft is alive and well in Whitewood. Especially as we recognize the owner of the local inn, Mrs. Newell (Patricia Jessel), as Elizabeth Selwyn, a witch that was burned at the stake in the film’s 17th century-set opening scene and who pledged her eternal life to Satan if he would spare her from death. Clearly that sounded good to Satan as Elizabeth is alive and well in the present, running the Whitewood establishment known as The Raven’s Inn.

As soon as Nan enters Whitewood, she’s in way over her head without knowing it. Her brother Richard (Dennis Lotis) and boyfriend Bill (Tom Naylor) had tried to warn her off from taking this trip but there was no talking sense to headstrong Nan and now she’s about to find out way more than she ever wanted to about the world of witchcraft. Nan isn’t a particularly vividly drawn heroine but her plucky yet unabrasive nature is enough to get us on her side and the icy-mannered Mrs. Newell certainly makes us fear for Nan’s well-being – especially as Nan doesn’t have much of a head for self-preservation. Even with the foreboding, hostile atmosphere Nan encounters during her short time in Whitewood, when she discovers a trap door in her room leading into a dank underground cavern, her inquisitive, incautious, nature compels her to investigate rather than to play it safe.

As a result, Nan earns a crushing “F” in survival instincts as (spoiler alert!) her life comes to an abrupt end, sacrificed at the hands of Elizabeth Selwyn and her coven in the name of Satan. So much about The City of the Dead is hokey – pleasingly so, it should be said – that Nan’s cruel, sudden dispatching comes as a genuine surprise midway through what had seemed to be such a mild mannered film.

The City of the Dead came out within months of Psycho in 1960 and much has been made of the fact that both films have their apparent heroines murdered early on. Unlike the taboo-breaking Psycho, though, which has the audience expecting to be taken to some dark places well before Marion Crane ever sets foot in the shower, The City of the Dead is old-fashioned and innocuous until the point where Nan’s life is snuffed out. And that “safe” tone that it has almost – almost – makes Nan’s death even more of a sucker punch than Marion Crane’s.

There’s an element of sin involved in Marion’s death. She transgresses when she steals that money and even though she doesn’t deserve to pay for that crime with her life, we have that underlying sense that she put herself in a position for something bad to happen to her. Maybe it relates to our own subconscious fears of what would happen to us if we should ever “go a little mad” ourselves – that we’d somehow pay for it in some terrible, random way; that the universe would see our crime and make us answer for it. Nan, however, is a good girl through and through. For crying out loud, she’s only in Whitewood in the first place because she wanted to write a really kick-ass senior paper!

She’s a heroine that belongs on the cover of a kid’s mystery novel, shining a flashlight through a cobwebbed corridor – and in fact, that is exactly what she’s doing just before she’s dragged to her death. When she dies, it’s as if Nancy Drew had gotten her throat slit halfway through “The Secret of the Old Clock.”

As in the wake of Marion’s death in Psycho, it’s up to those around Nan to carry on the story after she’s gone. When weeks go by and Nan hasn’t been heard from, a concerned Richard and Bill head separately to Whitewood to find her and while they might not be as easily taken out as poor Nan was, Elizabeth Selwyn and her coven still possess the home turf advantage.

Everything culminates in a slam-bang finale that still ranks as one of the most pulse-pounding in horror. Nan’s death may be the film’s most shocking moment but the climax is stunning it its own right as the shadow of a cross is used to set the witches ablaze.

Directed by first-time feature helmer John Llewellyn Moxey (who would direct the original Kolchak TV movie, 1973’s The Night Stalker), this UK film was also the first to be produced by future head of Amicus, Milton Subotsky.

Still more of a cherished cult item even all these years later rather than a widely known classic, The City of the Dead is pretty near-perfect. It’s in crisp black and white, it’s entirely set-bound (which gives the “outdoor” scenes in Whitewood an off-kilter, artificial feel), it’s got horror royalty in the form of Christopher Lee, and Whitewood is shrouded in thick fog, just like a town in a horror movie ought to be (making it all the better for processions of dark-robed figures to wander their way through).

I’m not usually one to pine away for the good old days but watching The City of the Dead, it’s hard not to feel a pang of sadness knowing that the likes of this will never come again. Witches are in vogue now thanks to recent films like Oz: The Great and Powerful and The Lords of Salem as well as the upcoming season of American Horror Story but few can compete with The City of the Dead’s still-potent brand of witches brew.

Originally published 10/9/13 at Shock Till You Drop

Great write-up of this classic.
That central surprise made a HUGE impression on me when I was a kid and kind of set my taste in horror from that point on.

Thanks, Knob! Horror Hotel's definitely a movie that made a big impression on a lot of fans who saw it at an early age!