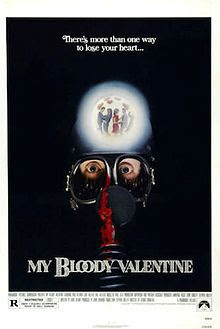 In the late ‘70s and early ’80s, in the wake of Halloween’s record-setting success, producers were madly scrambling to grab any remaining holidays to center their own slasher movie around. As slasher films typically hinge on payback for some perceived (or actual) past betrayal or wrong, Valentine’s Day – a day famous for fostering bitter disappointments and hurt feelings – was an ideal candidate for the slasher treatment.

One of several slasher productions made in Canada in the early ‘80s (along with Prom Night, Happy Birthday to Me and Terror Train), My Bloody Valentine proved easy for slasher buffs to adore, even if the MPAA – then on a crusade to neuter the new wave of splatter films – demanded heavy cuts be made before it awarded MBV an R-rating. To have the film released with all its bloodshed intact would’ve been nice but what makes MBV work is its attention to character and atmosphere so its FX didn’t have to be its key selling point.

An uncut version of the film was finally released on DVD in 2009 in time for the release of the 3-D remake, but while it was nice to finally see more of FX master Tom Burman’s work, as it turned out it didn’t really improve upon the version that fans were already familiar with. In its original, R-rated form, MBV was all it needed to be.

Following the trend of most slashers at the time, screenwriter John Beaird and director George Mihalka lay out a whodunnit storyline involving the possible return of crazed coal miner Harry Warden to the town that he terrorized many years before. Back in the day, Warden was the sole survivor of a mine collapse (triggered by unsafe methane levels ignored by supervisors eager to get to a Valentine’s dance) which left his co-workers dead and himself trapped with their bodies for weeks.

When rescuers finally got to Harry, they found that he’d had to resort to cannibalism in order to survive. Not the kind of thing one easily bounces back from. The next Valentine’s Day, Harry took his revenge on his former supervisors, hacking them to death with a pickax and leaving a warning to never hold another Valentine’s Day dance again.

Harry became a boogeyman figure that haunted the town’s collective memory, with his grim vow being enough to keep Cupid at bay in Valentine Bluffs for at least a generation. While the town’s elders successfully squelched holiday festivities for years, those who were only children when Harry conducted his rampage have come of age and want to forget the superstitious fears of their parents and have a Valentine celebration of their own.

Believing that enough time has passed, the mayor has given his permission but that will prove to be a heartbreaking decision. Days before V-Day, the mayor and sheriff receive a heart-shaped candy box containing a torn-out human heart along with a rhyming taunt warning them to stop the dance. After receiving this, the panicked mayor and sheriff cancel all celebrations while trying to keep the grisly truth from the rest of the town.

Even though all signs point to the return of Harry Warden, the sheriff isn’t having any luck locating Valentine Bluff’s most infamous son. The asylum to which Harry was committed to has lost track of him due to bureaucratic ineptitude – not being able to determine whether he is still a patient, was released, or has died. That makes the job of the sheriff and mayor all the more difficult as they work to root out the killer, even as the maniac claims another victim.

For their part, the young people of Valentine Bluffs are blissfully ignorant of the danger they’re in and are caught up in their own personal dramas. Appropriately for a movie built around Valentine’s Day, the kids of MBV are concerned with matters of the heart above all else.

Sarah (Lori Hallier) has been dating miner Axel Palmer (Neil Affleck) since her previous boyfriend (and the mayor’s son) Jesse “T.J”’ Hanniger Jr. (Paul Kelman) abruptly left her many months ago to go build a new life for himself in the big city, beyond the slim opportunities of Valentine Bluffs. Now that the big city has served him some humble pie, T.J. has returned with his tail between his legs, back working in the coal mine with hopes of picking up where he and Sarah left off.

This notion doesn’t sit so well with Axel and the competition over Sarah looks to be a potentially bloody one. Both Axel and T.J. are surly types, prone to outbursts of violence – surely one of them could be the gas-masked slayer (an outfit that’s among the most imposing in slasherdom) stalking the town. Or maybe it’s old Hap, the cranky bartender who doesn’t care for the way these rude-ass kids don’t respect the legend of Harry Warden. As it turns out, there are plenty of red herrings to go along with all the red hearts in Valentine Bluffs.

Of course, given that My Bloody Valentine is one of the most popular slashers ever, it’s safe to say that most of you (likely all) already know who the killer is. For those rare individuals who might not, though, spoilers ahead.

In classic slasher fashion, MBV’s mystery is resolved with a climatic flashback that explains everything – sort of. Some nagging questions I’ve always had: first, why would everybody be so cavalier in discussing Harry Warden around Axel when his father was one of Harry’s original victims? We as viewers only find out at the end that Axel’s dad was one of the supervisors Harry murdered but yet the way it’s mentioned, it seems to have been common knowledge among the characters. You’d think that would’ve been an earlier point of discussion.

And the idea that Axel would want to emulate the man that had slaughtered his father seems, um, curious from a psychological standpoint. Wouldn’t he hate Harry and want to take revenge on him rather than want to carry on his legacy? But hey, so what if the logic is completely screwy? It’s a slasher movie – somebody’s got to be the killer and that’s that.

Slasher movies commonly leave room for a sequel but My Bloody Valentine left fans more primed than usual for a follow-up with the wounded but very much alive killer lurching off into the mine shafts vowing his revenge on the whole damn town. Sadly no sequel ever materialized.

On the upside, though, the 2009 remake was one of the finer remakes of recent times and came off like a genuine love letter to the original and to the slasher genre in general. The original is still unarguably the most preferred of the two MBV’s, though. Apropos to Valentine Bluffs’ major industry, it should be said that you’d have to have a real heart of coal not to have a soft spot for My Bloody Valentine. 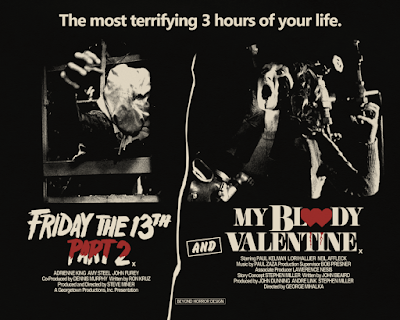 Originally published 2/14/13 at Shock Till You Drop

It is a great one from the era and much loved for very good reason. Now and then, it is good to take a trip back to Valentine Bluffs. A movie from nearly 40 years ago now, but gets right so much of what low budget movies miss out on - a tale you WANT to revisit.

Yes, definitely. I go back to this one frequently. Everything about it from the cast to the story to the atmosphere just clicks.